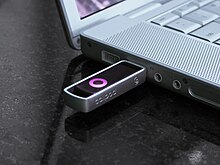 A dongle is a small piece of computer hardware that connects to a port on another device to provide it with additional functionality, or enable a pass-through to such a device that adds functionality.[1]

In computing, the term was initially synonymous with software protection dongles—a form of hardware digital rights management where a piece of software will only operate if a specified dongle—which typically contains a license key or some other cryptographic protection mechanism—is plugged into the computer while it is running.

The term has since been applied to other forms of devices with a similar form factor, such as adapters that convert ports to handle different types of connectors (such as DVI to VGA for displays, USB to serial connection, and in modern computing, USB-C to other types of ports, and Mobile High-Definition Link),[2] USB wireless adapters for standards such as Bluetooth and Wi-Fi (the term "stick" or "key" is more commonly used to describe USB flash drives, as well as modern forms of dongles with slimmer form factors more akin to flash drives), and small form-factor digital media players that plug into HDMI ports. 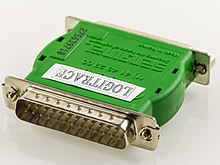 There are varying accounts on the etymology of the word "dongle"; in a 1999 paper, P. B. Schneck stated that the origin was unclear, but that it was possibly a corruption of the word "dangle" (since these devices "dangle" from a port on a PC).[3]

A 1992 Byte magazine advertisement by Rainbow Technologies claimed that dongles were invented by and named after a person named "Don Gall", which spawned an urban legend. Linguist Ben Zimmer noted that the claim was likely a by-product of their "tongue-in-cheek" marketing style, and "was so egregiously false that the company happily owned up to it as a marketing ploy when pressed by Eric S. Raymond, who maintains the Jargon File, an online lexicon of hacker slang."[3][4]

Security dongles are typically used to help prevent unauthorized use and copying of certain forms of software. Initially using ports such as the serial port or parallel port, most are now in USB format.

On the other hand, some unlicensed game cartridges have a "daisy chain" design that allows licensed games to pass along their authorization, for instance to circumvent the 10NES chip on the Nintendo Entertainment System.

A Chromecast plugged into the HDMI port of a TV. The wire attached to the other end is the USB power supply.

In the mid-to-late 2010s, the dongle form factor was extended to digital media players with a small, stick-like form factor — such as Chromecast and Fire TV Stick — that are designed to plug directly into an HDMI port on a television or AV receiver (powered via Micro USB connection to the television itself or an AC adapter), in contrast to a larger set-top box-style device. Single-board computers, such as the Intel Compute Stick, have also been produced in a similar means.[5][6]