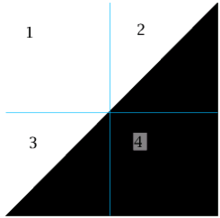 Fractal compression is a lossy compression method for digital images, based on fractals. The method is best suited for textures and natural images, relying on the fact that parts of an image often resemble other parts of the same image.[1] Fractal algorithms convert these parts into mathematical data called "fractal codes" which are used to recreate the encoded image.

Fractal image representation may be described mathematically as an iterated function system (IFS).[2]

We begin with the representation of a binary image, where the image may be thought of as a subset of

According to these mapping functions, the IFS describes a two-dimensional set S as the fixed point of the Hutchinson operator

That is, H is an operator mapping sets to sets, and S is the unique set satisfying H(S) = S. The idea is to construct the IFS such that this set S is the input binary image. The set S can be recovered from the IFS by fixed point iteration: for any nonempty compact initial set A0, the iteration Ak+1 = H(Ak) converges to S.

The set S is self-similar because H(S) = S implies that S is a union of mapped copies of itself:

So we see the IFS is a fractal representation of S.

A challenging problem of ongoing research in fractal image representation is how to choose the ƒ1,...,ƒN such that its fixed point approximates the input image, and how to do this efficiently.

A simple approach[2] for doing so is the following partitioned iterated function system (PIFS):

In the second step, it is important to find a similar block so that the IFS accurately represents the input image, so a sufficient number of candidate blocks for Di need to be considered. On the other hand, a large search considering many blocks is computationally costly. This bottleneck of searching for similar blocks is why PIFS fractal encoding is much slower than for example DCT and wavelet based image representation.

The initial square partitioning and brute-force search algorithm presented by Jacquin provides a starting point for further research and extensions in many possible directions -- different ways of partitioning the image into range blocks of various sizes and shapes; fast techniques for quickly finding a close-enough matching domain block for each range block rather than brute-force searching, such as fast motion estimation algorithms; different ways of encoding the mapping from the domain block to the range block; etc.[3]

With fractal compression, encoding is extremely computationally expensive because of the search used to find the self-similarities. Decoding, however, is quite fast. While this asymmetry has so far made it impractical for real time applications, when video is archived for distribution from disk storage or file downloads fractal compression becomes more competitive.[7][8]

An inherent feature of fractal compression is that images become resolution independent[12] after being converted to fractal code. This is because the iterated function systems in the compressed file scale indefinitely. This indefinite scaling property of a fractal is known as "fractal scaling".

Fractal image compression has been used in a number of commercial applications: , developed under license from Iterated Systems Inc., Genuine Fractals 5[22] which is a Photoshop plugin capable of saving files in compressed FIF (Fractal Image Format). To date the most successful use of still fractal image compression is by Microsoft in its Encarta multimedia encyclopedia,[23] also under license.

Iterated Systems Inc. supplied a shareware encoder (Fractal Imager), a stand-alone decoder, a Netscape plug-in decoder and a development package for use under Windows. As wavelet-based methods of image compression improved and were more easily licensed by commercial software vendors the adoption of the Fractal Image Format failed to evolve.[citation needed] The redistribution of the "decompressor DLL" provided by the ColorBox III SDK was governed by restrictive per-disk or year-by-year licensing regimes for proprietary software vendors and by a discretionary scheme that entailed the promotion of the Iterated Systems products for certain classes of other users.[24]

During the 1990s Iterated Systems Inc. and its partners expended considerable resources to bring fractal compression to video. While compression results were promising, computer hardware of that time lacked the processing power for fractal video compression to be practical beyond a few select usages. Up to 15 hours were required to compress a single minute of video.

ClearVideo – also known as RealVideo (Fractal) – and SoftVideo were early fractal video compression products. ClearFusion was Iterated's freely distributed streaming video plugin for web browsers. In 1994 SoftVideo was licensed to Spectrum Holobyte for use in its CD-ROM games including Falcon Gold and Star Trek: The Next Generation A Final Unity.[25]

In 1996, Iterated Systems Inc. announced[26] an alliance with the Mitsubishi Corporation to market ClearVideo to their Japanese customers. The original ClearVideo 1.2 decoder driver is still supported[27] by Microsoft in Windows Media Player although the encoder is no longer supported.

Two firms, Total Multimedia Inc. and Dimension, both claim to own or have the exclusive licence to Iterated's video technology, but neither has yet released a working product. The technology basis appears to be Dimension's U.S. patents 8639053 and 8351509, which have been considerably analyzed.[28] In summary, it is a simple quadtree block-copying system with neither the bandwidth efficiency nor PSNR quality of traditional DCT-based codecs. In January 2016, TMMI announced that it was abandoning fractal-based technology altogether.

A library called Fiasco was created by Ullrich Hafner. In 2001, Fiasco was covered in the Linux Journal. [38] According to the 2000-04 Fiasco manual, Fiasco can be used for video compression. [39] The Netpbm library includes the Fiasco library. [40][41]

Femtosoft developed an implementation of fractal image compression in Object Pascal and Java. [42]