Fritzing is an open-source initiative[2] to develop amateur or hobby CAD software for the design of electronics hardware, to support designers and artists ready to move from experimenting with a prototype to building a more permanent circuit. It was developed at the University of Applied Sciences Potsdam.[3] 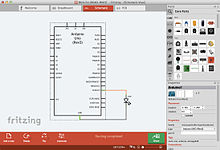 The software is created in the spirit of the Processing programming language and the Arduino microcontroller[4] and allows a designer, artist, researcher, or hobbyist to document their Arduino-based prototype and create a PCB layout for manufacturing. The associated website helps users share and discuss drafts and experiences as well as to reduce manufacturing costs.

Fritzing can be seen as an electronic design automation (EDA) tool for non-engineers: the input metaphor is inspired by the environment of designers (the breadboard-based prototype), while the output is focused on accessible means of production. As of December 2, 2014 Fritzing has made a code view option, where one can modify code and upload it directly to an Arduino device.[5]

Component images are distributed under CC-BY-SA, which will also be the license for any generated breadboard views.

Fritzing allows for easy creation of printed circuit boards. FritzingFab enables users to order PCBs with designs made on the Fritzing software.