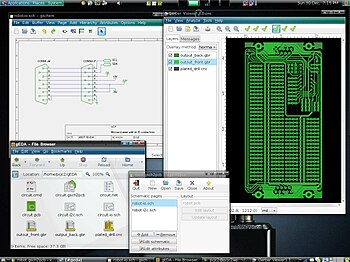 Gschem and gerbv showing a simple connector design under creation using components from the gEDA Suite.

The word "gEDA" is a conjunction of "GPL" and "EDA". The names of some of the individual tools in the gEDA Suite are prefixed with the letter "g" to emphasize that they are released under the GNU General Public License.

The gEDA project was started by Ales Hvezda in an effort to remedy the lack of free software EDA tools for Linux/UNIX.[1] The first software was released on 1 April 1998, and included a schematic capture program and a netlister.[2] At that time, the gEDA Project website and mailing lists were also set up.

Other open-source EDA programs were created at about the same time. The authors of those programs became affiliated with the gEDA website and mailing lists, and the collaborative gEDA Project was born.

At present, the gEDA Project remains a federation of software tools developed by different (but sometimes overlapping) programmers. The thread which holds the project together is the shared vision of creating a powerful, community-based, open-source EDA toolkit.

Loosely speaking, the term "gEDA Suite" refers to all free software projects and applications that have associated themselves with the gEDA Project via the geda-dev/geda-user mailing lists. These include:

Within the gEDA Suite, gEDA/gaf ("gaf" stands for "gschem and friends") is the smaller subset of tools grouped together under the gEDA name and maintained directly by the gEDA project's founders. GEDA/gaf includes:

Because one of the gEDA Project's longstanding goals is to provide a suite of EDA applications for Linux, all applications in the gEDA Suite compile and run on Linux. Besides building the programs from source, binary executables for all programs in the gEDA Suite are available from popular package archives; the programs may be installed on many common Linux distributions using package management tools such as apt or dnf.

All gEDA applications will also compile and run on other Unix-like operating systems, such as OpenBSD, FreeBSD and NetBSD. Some of these distributions also support installation of pre-packaged binaries using package management utilities.

Most gEDA applications also install and run successfully on Mac OS X, typically using the Fink package manager and Macports. Since few commercial EDA tools run on the Mac, this feature has made gEDA a popular electronic design package amongst Mac users.

As a consequence of the project's openness, schematic symbols, footprints, and utility scripts are freely created and shared amongst the members of the gEDA community at a spin-off website, www.gedasymbols.org.