Golomb coding is a lossless data compression method using a family of data compression codes invented by Solomon W. Golomb in the 1960s. Alphabets following a geometric distribution will have a Golomb code as an optimal prefix code,[1] making Golomb coding highly suitable for situations in which the occurrence of small values in the input stream is significantly more likely than large values.

Rice coding (invented by ) denotes using a subset of the family of Golomb codes to produce a simpler (but possibly suboptimal) prefix code. Rice used this set of codes in an adaptive coding scheme; "Rice coding" can refer either to that adaptive scheme or to using that subset of Golomb codes. Whereas a Golomb code has a tunable parameter that can be any positive integer value, Rice codes are those in which the tunable parameter is a power of two. This makes Rice codes convenient for use on a computer since multiplication and division by 2 can be implemented more efficiently in binary arithmetic.

Rice was motivated to propose this simpler subset due to the fact that geometric distributions are often varying with time, not precisely known, or both, so selecting the seemingly optimal code might not be very advantageous.

Rice coding is used as the entropy encoding stage in a number of lossless image compression and audio data compression methods.

to divide an input value

, the result of a division by

, the remainder. The quotient is sent in unary coding, followed by the remainder in truncated binary encoding. When

Golomb–Rice codes can be thought of as codes that indicate a number by the position of the bin (q), and the offset within the bin (r). The above figure shows the position q and offset r for the encoding of integer N using Golomb–Rice parameter M.

Formally, the two parts are given by the following expression, where

is the number being encoded: 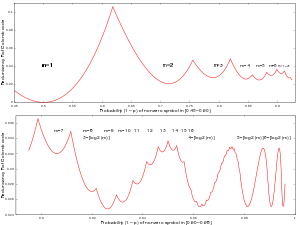 This image shows the redundancy of the Golomb code, when M is chosen optimally for p ≥ 1/2.

can be of a varying number of bits. Specifically,

is only b bits for Rice code and switches between b-1 and b bits for Golomb code (i.e. M is not a power of 2). Let

, then use b bits to encode r. Clearly,

if M is a power of 2 and we can encode all values of r with b bits.

The parameter M is a function of the corresponding Bernoulli process, which is parameterized by

the probability of success in a given Bernoulli trial.

is either the median of the distribution or the median +/− 1. It can be determined by these inequalities:

which are solved by

Use with signed integers

Golomb's scheme was designed to encode sequences of non-negative numbers. However it is easily extended to accept sequences containing negative numbers using an overlap and interleave scheme, in which all values are reassigned to some positive number in a unique and reversible way. The sequence begins: 0, -1, 1, -2, 2, -3, 3, -4, 4 ... The nth negative value (i.e., -n) is mapped to the nth odd number (2n-1), and the mth positive value is mapped to the mth even number (2m). This may be expressed mathematically as follows: a positive value

), and a negative value

). Such a code may be used for simplicity, even if suboptimal. Truly optimal codes for two-sided geometric distributions include multiple variants of the Golomb code, depending on the distribution parameters, including this one.[2]

Use for run-length encoding

Given an alphabet of two symbols, or a set of two events, P and Q, with probabilities p and (1 − p) respectively, where p ≥ 1/2, Golomb coding can be used to encode runs of zero or more P's separated by single Q's. In this application, the best setting of the parameter M is the nearest integer to

. When p = 1/2, M = 1, and the Golomb code corresponds to unary (n ≥ 0 P's followed by a Q is encoded as n ones followed by a zero). If a simpler code is desired, one can assign Golomb-Rice parameter

) to the integer nearest to

; although not always the best parameter, it is usually the best Rice parameter and its compression performance is quite close to the optimal Golomb code. (Rice himself proposed using various codes for the same data to figure out which was best. A later JPL researcher proposed various methods of optimizing or estimating the code parameter.[3])

Consider using a Rice code with a binary portion having

bits to run-length encode sequences where P has a probability

is the probability that a bit will be part of an

Ps and one Q) and

, the proportion compressed. For

compression, while the entropy limit is

When a probability distribution for integers is not known, then the optimal parameter for a Golomb-Rice encoder cannot be determined. Thus, in many applications, a two-pass approach is used: first, the block of data is scanned to estimate a probability density function (PDF) for the data. The Golomb-Rice parameter is then determined from that estimated PDF. A simpler variation of that approach is to assume that the PDF belongs to a parametrized family, estimate the PDF parameters from the data, and then determine compute the optimal Golomb-Rice parameter. That is the approach used in most of the applications discussed below.

An alternative approach to efficiently encode integer data whose PDF is not known or is varying, is to use a backwards-adaptive encoder. The Run-Length Golomb-Rice (RLGR) achieves that using a very simple algorithm that adjusts the Golomb-Rice parameter up or down, depending on the last encoded symbol. A decoder can follow the same rule to track the variation of the encoding parameters, so no side information needs to be transmitted, just the encoded data. Assuming a Generalized Gaussian PDF, which covers a wide range of statistics seen in data such as prediction errors or transform coefficients in multimedia codecs, the RLGR encoding algorithm can perform very well in such applications.

The Golomb–Rice coder is used in the entropy coding stage of based lossless image codecs. One such experiment yields a compression ratio graph given below. See other entries in this category at the bottom of this page. In those compression, the progressive space differential data yields an alternating suite of positive and negative values around 0, which are remapped to positive-only integers (by doubling the absolute value and adding one if the input is negative), and then Rice–Golomb coding is applied by varying the divisor which remains small.[citation needed] 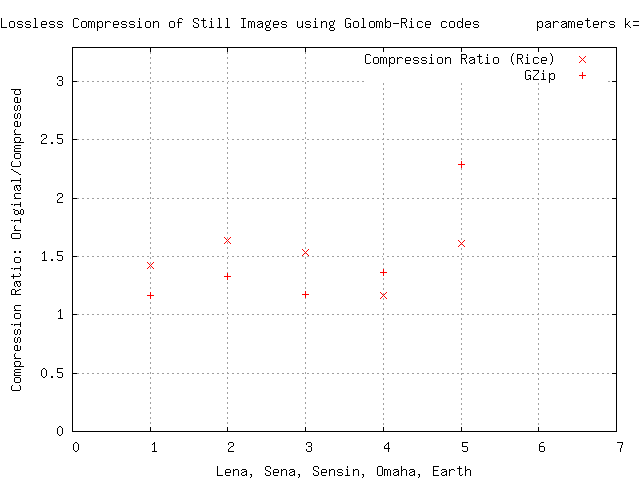 In those results, the Rice coding may create very long sequences of one-bits for the quotient; for practical reasons, it is often necessary to limit the total run-length of one-bits, so a modified version of the Rice–Golomb encoding consists of replacing the long string of one-bits by encoding its length with a recursive Rice–Golomb encoding; this requires reserving some values in addition to the initial divisor k to allow the necessary distinction.

The JPEG-LS scheme uses Rice–Golomb to encode the prediction residuals.

The Run-Length Golomb-Rice (RLGR) adaptive version of Golomb-Rice coding, mentioned above, is used for encoding screen content in virtual machines in the RemoteFX component of the Microsoft Remote Desktop Protocol.