Skip to content
Set of standards for AC power connectors used on domestic appliances on the appliance side
"IEC connector" redirects here. For other uses, see IEC connector (disambiguation).

IEC 60320 Appliance couplers for household and similar general purposes[1] is a set of standards from the International Electrotechnical Commission (IEC) specifying non-locking connectors for connecting power supply cords to electrical appliances of voltage not exceeding 250 V (a.c.) and rated current not exceeding 16 A.[2] Different types of connector (distinguished by shape and size) are specified for different combinations of current, temperature and earthing requirements. Unlike IEC 60309 connectors, they are not coded for voltage; users must ensure that the voltage rating of the equipment is compatible with the mains supply. The standard uses the term coupler to encompass connectors on power cords and power inlets and outlets built into appliances.

Appliance couplers enable the use of standard inlets and country-specific cord sets which allow manufacturers to produce the same appliance for many markets, where only the cord set has to be changed for a particular market. Interconnection couplers allow a power supply from a piece of equipment or an appliance to be made available to other equipment or appliances. Couplers described under these standards have standardized current and temperature ratings.

The parts of the couplers are defined in the standard as follows.

Non-rewirable plugs and connectors are typically permanently molded onto cords, and cannot be removed or rewired without cutting the cords.

Each type of coupler is identified by a standard sheet number. For appliance couplers this consists of the letter "C" followed by a number, where the standard sheet for the appliance inlet is 1 higher than the sheet for the corresponding cable connector. Many types of coupler also have common names. The most common ones are IEC connector for the common C13 and C14, the figure-8 connector for C7 and C8, and cloverleaf connector or Mickey Mouse connector for the C5/C6. Kettle plug (often jug plug in Australian or New Zealand English) is a colloquial term used for the high-temperature C16 appliance inlet (and sometimes for C15 connector that the plug goes into). “Kettle/jug plug” is also informally used to refer to regular temperature-rated C13 and C14 connectors. (A high-temperature-rated cord with a C15 connector can be used to power a computer with a C14 plug, but a cord with a low-temperature C13 connector will not fit a high-temperature appliance that has a C16 plug.)

Detachable appliance couplers are used in office equipment, measuring instruments, IT environments, and medical devices, among many types of equipment for worldwide distribution. Each appliance's power system must be adapted to the different plugs used in different regions. An appliance with a permanently-attached plug for use in one country cannot be readily sold in another which uses an incompatible wall socket; this requires keeping track of variations throughout the product's life cycle from assembly and testing to shipping and repairs.

Instead, a country-specific power supply cord can be included in the product packaging, so that model variations are minimized and factory testing is simplified. A cord which is fitted with non-rewireable (usually moulded) connectors at both ends is termed a cord set. Appliance manufacturing may be simplified by mounting an appliance coupler directly on the printed circuit board. Assembly and handling of an appliance is easier if the power cord can be removed without much effort.

Appliances can be used in another country easily, with a simple change of the power supply cord (including a connector and a country-specific plug). The power supply cord can be replaced easily if damaged, because it is a standardized part that can be unplugged and re-inserted. Safety hazards, maintenance expenditure and repairs are minimized.

Parts of the standard

IEC 60320 is divided into several parts:

The standards define the mechanical, electrical and thermal requirements and safety goals of power couplers. The standard scope is limited to appliance couplers with a rated voltage not exceeding 250 V (a.c.) at 50 Hz or 60 Hz, and a rated current not exceeding 16 A. Further sub-parts of IEC 60320 focus on special topics such as protection ratings and appliance specific requirements.

Selection of a coupler depends in part on the IEC appliance classes. The shape and dimensions of appliance inlets and connectors are coordinated so that a connector with lower current rating, temperature rating, or polarization cannot be inserted into an appliance inlet that requires higher ratings. (i.e. a Protection Class II connector cannot mate with a Class I inlet which requires an earth); whereas connecting a Class I connector to a Class II appliance inlet is possible because it creates no safety hazard.

In addition the standards define further general criteria such as withdrawal forces, testing procedures, the minimum number of insertion cycles, and the number of flexings of cords.

North American rating agencies (CSA, NOM-ANCE, and UL) will certify IEC 60320 connectors for higher currents than are specified in the IEC standard itself. In particular, UL will certify:

This is exploited by high-powered computer power supplies, up to 1200 W output, and even some particularly efficient 1500 W output models[14] to use the more popular C14 input on products sold worldwide.

Although less common, power bricks with C6 and C8 inputs and ratings up to 300 W also exist.

The dimensions and tolerances for connectors and appliance inlets are given in standard sheets, which are dimensioned drawings showing the features required for safety and interchangeability.

The C1 coupler and C2 inlet were commonly used for mains-powered electric shavers. These have largely been supplanted by cordless shavers with rechargeable batteries or corded shavers with an AC adapter.

This coupler is sometimes colloquially called a cloverleaf coupler or "Mickey Mouse" (because the cross section resembles the silhouette of the Disney character).

The C6 inlet is used on laptop power supplies and portable projectors, as well as on some desktop computers, some LCD monitors and recent LCD televisions from LG.

Commonly known as a "figure-8", "infinity" or "shotgun" connector due to the shape of its cross-section, or less commonly, a Telefunken connector[17] after its originator. This coupler is often used for small cassette recorders, battery/mains-operated radios, battery chargers, some full-size audio-visual equipment, laptop computer power supplies, video game consoles, and similar double-insulated appliances.

A C8B inlet type is defined by the standard for use by dual-voltage appliances; it has three pins and can hold a C7 connector in either of two positions, allowing the user to select voltage by choosing the position the connector is inserted.[18]

A similar but polarized connector has been made, but is not part of the standard. Sometimes called C7P, it is asymmetrical, with one side squared. Unpolarized C7 connectors can be inserted into the polarized inlets; however, doing so might be a safety risk if the device is designed for polarized power. Although not specified by IEC 60320, and not clear whether any formal written standard exists, the most common wiring appears to connect the squared side to the neutral, and the rounded to the hot line.[19][20] Note: Clause 9.5 was added to IEC 60320-1:2015, this requires that "It shall not be possible to engage a part of a non-standard appliance coupler with a complementary part of an appliance coupler complying with the standard sheets in any part of IEC 60320." 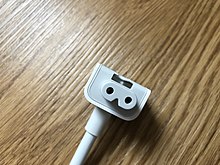 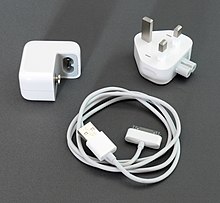 Apple uses a modified version of this connector,[citation needed] with the receptacle having a proprietary pin that secures the adapter in place and provides grounding. The cabled adapter provides grounding through a slide-in connector, while the angled AC adapter ("duckhead") does not provide grounding.

Most desktop computers use the C14 inlet to attach the power cord to the power supply, as do many instrument amplifiers, monitors, printers and other peripherals. A power cord with a suitable power plug (for the locality where the appliance is being used) on one end and a C13 connector (connecting to the appliance) on the other is commonly called an IEC cord. IEC cords are used to power many pieces of electronic equipment, including computers, instrument amplifiers, professional audio equipment and virtually all professional video equipment.

There are also a variety of splitter blocks, splitter cables, and similar devices available. These are usually un-fused (with the exception of C13 cords attached to BS 1363 plugs, which are always fused).

A cable consisting of a C13 and C14 connector is commonly mislabeled as an "extension cord", as although that is not the intended purpose, it can be used as such.

The C13 connector and C14 inlet are commonly found on computers, servers, routers, and switches. Power cord sets utilizing a C13 connector and a C14 plug are commonplace in data centers to provide power from a PDU (power distribution unit) to a server. These data-center power cables are now offered in many colors.. Colored power cables are used to color-code installations.[21]

Some electric kettles and similar hot household appliances like home stills use a supply cord with a C15 connector and a matching C16 inlet on the appliance; their temperature rating is 120 °C (248 °F) rather than the 70 °C (158 °F) of the similar C13/C14 combination. The official designation in Europe for the C15/C16 coupler is a "hot-condition" coupler.

These are similar in form to the C13/C14 coupler, except with a ridge opposite the earth in the C16 inlet (preventing a C13 fitting), and a corresponding valley in the C15 connector (which doesn't prevent it fitting a C14 inlet). For example, an electric kettle cord can be used to power a computer, but an unmodified computer cord cannot be used to power a kettle.

There is some public confusion between C13/C14 and C15/C16 couplers, and it is not uncommon for C13/C14 to be informally referred to as "kettle plug" or "kettle lead" (or some local equivalent).

In European countries the C15/C16 coupler has replaced and made obsolete the formerly common types of national appliance coupler in many applications.

The IBM Wheelwriter series of electronic typewriters are one common application. Three-wire cords with C13 connectors, which are easier to find, are sometimes used in place of the two-wire cords for replacement. In this case, the ground wire will not be connected.

The C17/C18 coupler is often used in audio applications where a floating ground is maintained to eliminate hum caused by ground loops. Other common applications are the power supplies of Xbox 360 game consoles, replacing the C15/C16 coupler employed initially, and large CRT televisions manufactured by RCA in the early 1990s.

Earthed, 16 A, polarized. This coupler is used for supplying power in IT applications where higher currents are required, as for instance, on high-power workstations and servers, power to uninterruptible power supplies, power to some power distribution units, large network routers, switches, blade enclosures, and similar equipment. This connector can also be found on high-current medical equipment. It is rectangular and has pins parallel to the long axis of the coupler face.

Withdrawn and other standard sheets

The dimensions and tolerances for plug connectors and appliance outlets are given in standard sheets, which are dimensioned drawings showing the features required for safety and interchangeability.

Cables with a C13 connector at one end and a type E plug connector at the other are commonly available. They have a variety of common uses, including connecting power between older PCs and their monitors, extending existing power cords, connecting to type F outlets strips (commonly used with rack-mount gear to save space and for international standardization) and connecting computer equipment to the output of an uninterruptible power supply (UPS). Type J outlets are used in a similar way.