IEC 60906-1 is an international standard designed "to provide a standard for a safe, compact and practical 16 A 250 V AC system of plugs and socket-outlets that could be accepted by many countries as their national standard, even if not in the near future."[1] The standard was originally published by the International Electrotechnical Commission in 1986; the current edition is ed2.0 published in 2009. Although it is almost identical to the Swiss SEV 1011 T12 plug for 10 A 250 V a.c. standardized in 1937, its dimensions are slightly different and its polarization is flipped (if the socket has the protective/earth conductor at the bottom, the phase is located left and neutral right). As of July 2014, only South Africa has introduced a standard (SANS 164-2)[2] based closely on IEC 60906-1. Brazil used it as the basis for its NBR 14136 standard, but this is not compatible with IEC 60906-1. In 2017 the European Union (EU) published recommendations advising against the harmonisation of domestic plug and socket systems in the EU.[3]

The IEC 60906-1 plugs are smaller than any other European plug with 16 A rating, being only slightly larger than the 2.5 A Europlug and providing much more reliable contact. The sockets are small enough that two can be installed in the space taken by a single Schuko or BS 1363 socket.

As it uses the same 19 mm pin spacing as most existing European systems (Schuko, etc.), it would be possible to design sockets that can accept both the traditional plug as well as the IEC 60906-1 Class I and II plugs, thereby enabling a smooth transition to the new system. However, the IEC 60906-1 standard explicitly discourages the use of multi-standard sockets, claiming that such sockets are likely to create safety problems when used with plugs from other countries.

South Africa is the only country to have incorporated IEC 60906-1 plugs and sockets into its own national standards as SANS 164–2. SANS 164-2 was made the preferred standard in 2013, replacing the older SANS 164-1 (based on BS 546) but according to the South African Bureau of Standards (SABS) electrotechnical standards development manager, the new plugs and sockets would have "a long, long phase-in period, more than 20 years".[4]

According to the National Institute of Metrology Standardization and Industrial Quality in Brazil, the Brazilian Association of Technical Standards "began discussing the creation of a standard for plugs and sockets ... in the 1980s, based on the draft international standard based on IEC 60906-01. It was concluded with wide participation of the manufacturers of plugs and sockets and of electrical and electronic equipment, in July of 1998, with the publication of the norm ABNT NBR 14136."[5]

Possibility of acceptance in European Union 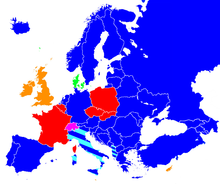 In the 1990s the EU requested CENELEC to devise a harmonized plug and socket system for Europe.[6] In 1995 that attempt was abandoned as it was not possible for CENELEC delegates to agree an acceptable solution, CENELEC forecast that converting European households, offices and factories to a common standard would cost about $125 billion.[7]

In response to a suggestion that the European Commission introduce a common system across the whole of the EU, the commission's Regulatory Fitness and Performance (REFIT) programme issued recommendations in 2017. REFIT found that "the harmonisation of plug and socket outlet systems in Europe, by introducing changes in national wiring legislations (would have) important transitional periods (above 75 years)", and that the cost to "replace the old socket-outlets (and the corresponding plugs of the appliances being used)" was estimated at 100 billion Euro, "generating a huge environmental impact, producing some 700 000 tons of electrical waste".[3] REFIT does not recommend harmonising the plugs and socket-outlet systems in Europe. 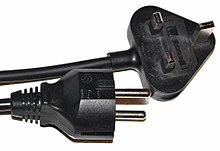 Modern injection moulding technology enables robust and safe plugs to be smaller than the Schuko and BS 1363 systems, which were designed in the early and mid 20th century respectively.

The IEC 60906-1 and BS 1363 systems have some common safety features in that plugs and sockets are polarized, and that sockets are required to have shutters for the line and neutral pins. An advantage of the IEC 60906-1 plug types is smaller physical sizes. The IEC 60906-1 plugs are also rated for up to 16 amperes, while the BS 1363 plugs are rated for 13 amperes. The unfused IEC 60906-1 is incompatible with UK law which requires an appropriately rated fuse in the plug to protect the attached flexible cord.[8]

Schuko plug partially inserted into a CEE 7/1 unearthed socket. The live pins are in contact while exposed. There is no connection for the earthing contact.

The IEC 60906-1 system also avoids the problems of the Schuko and French systems currently used in most of Europe and large parts of Asia:

The grounded IEC 60906-1 plug (IEC designation "Type N")[9] looks similar to the Swiss SN 441011 type 12 plug (IEC designation "Type J") designed in 1937. However, the latter has smaller diameter pins (4.0 mm), the ground pin is offset more (5 mm), it is only rated for 10 A and the polarization is flipped. Therefore, there is no compatibility between these grounded 3-pin plugs.

The IEC 60906-1 is similar to the Italian plug CEI 23-50 10 A ("Type L"), with the same front profile shaped as a flat hexagon and the same position of the line and neutral pins (the centres spaced 19 mm apart). However, the pins of the Type L 10 A are 4 mm in diameter (as in the Europlug) and the earth pin is aligned with the two others (no offset is present), making the Italian plug unpolarized. Moreover, the Italian plug is rated for up to 10 amperes (although a 16-ampere version exists with different and incompatible size), while the IEC 60906-1 plugs are rated for 16 amperes.