The Linux Standard Base (LSB) was a joint project by several Linux distributions under the organizational structure of the Linux Foundation to standardize the software system structure, including the Filesystem Hierarchy Standard used in the Linux kernel. LSB was based on the POSIX specification, the Single UNIX Specification (SUS), and several other open standards, but extended them in certain areas.

The goal of the LSB is to develop and promote a set of open standards that will increase compatibility among Linux distributions and enable software applications to run on any compliant system even in binary form. In addition, the LSB will help coordinate efforts to recruit software vendors to port and write products for Linux Operating Systems.

LSB compliance might be certified for a product by a certification procedure.[1]

LSB specified standard libraries (centered around the ld-lsb.so), a number of commands and utilities that extend the POSIX standard, the layout of the file system hierarchy, run levels, the printing system, including spoolers such as CUPS and tools like Foomatic, and several extensions to the X Window System. It also specified boot facilities, such as $local_fs, $network, which were used to indicate service dependencies in System V-style initialization scripts. A machine readable comment block at the top of a script provided the information necessary to determine at which point of the initialization process the script should be invoked; it was called the LSB header.[2]

The command lsb_release -a was available in many systems to get the LSB version details, or could be made available by installing an appropriate package, for example the redhat-lsb package in Red-Hat-flavored distributions such as Fedora,[3] or the lsb-release package in Debian-based distributions.

The standard stopped being updated in 2015 and current Linux distributions do not adhere to or offer it, however the lsb_release command is still available.[citation needed]

An example of LSB output in a terminal (Debian version 11) 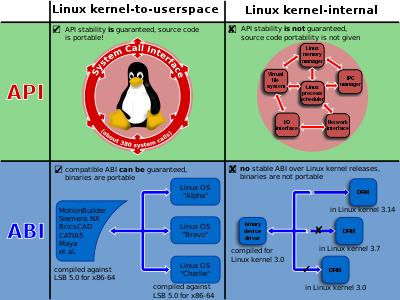 LSB was designed to be binary-compatible and produced a stable application binary interface (ABI) for independent software vendors. To achieve backward compatibility, each subsequent version was purely additive. In other words, interfaces were only added; no interfaces were removed. The LSB adopted an interface deprecation policy to give application developers enough time in case an interface was removed from LSB.

This allowed the developer to rely on every interface in LSB for a known time and also to plan for changes. Interfaces were only removed after having been marked "deprecated" for at least three major versions, or roughly eleven years.[4]

LSB 5.0 was the first major release that broke backward compatibility with earlier versions.[5]

The LSB, version 3.1, is registered as an official ISO/IEC international standard.[9] The main parts of it are:

The LSB was criticized[13][14][15][16] for not taking input from projects, most notably the Debian project, outside the sphere of its member companies.

Choice of the RPM package format

LSB specified that software packages should either be delivered as an LSB-compliant installer,[17] or (preferably) be delivered in a restricted form of the RPM Package Manager format.[18]

This choice of package format precluded the use of the many other, existing package formats not compatible with RPM. To address this, the standard did not dictate which package format the system must use for its own packages, merely that RPM must be supported to allow packages from third-party distributors to be installed on a conforming system.

The LSB-specified RPM format had a restricted subset of RPM features—to block usage of RPM features that would be untranslatable to .deb with Alien or other package conversion programs, and vice versa, as each format has capabilities the other lacks. In practice, not all Linux binary packages were necessarily LSB-compliant, so while most could be converted between .rpm and .deb, this operation was restricted to a subset of packages.

By using Alien, Debian was LSB-compatible for all intents and purposes, but according to the description of their lsb package,[19] the presence of the package "does not imply that we believe that Debian fully complies with the Linux Standard Base, and should not be construed as a statement that Debian is LSB-compliant."[19]

Debian strived to comply with the LSB, but with many limitations.[20] However, this effort ceased around July 2015 due to lack of interest and workforce inside the project.[21] In September 2015, the Debian project confirmed that while support for Filesystem Hierarchy Standard (FHS) would continue, support for LSB had been dropped.[22] Ubuntu followed Debian in November 2015.[23]

Additionally, the compliance test suites were criticized for being buggy and incomplete—most notably, in 2005 criticized the LSB for poorly written tests which can cause incompatibility between LSB-certified distributions when some implement incorrect behavior to make buggy tests work, while others apply for and receive waivers from complying with the tests.[24] He also denounced a lack of application testing, pointing out that testing only distributions can never solve the problem of applications relying on implementation-defined behavior.[24]

For the vendors considering LSB certifications in their portability efforts, the Linux Foundation sponsored a tool that analyzed and provided guidance on symbols and libraries that go beyond the LSB.[25]