The company was founded as Asahi Kogaku Goshi Kaisha in November 1919 by Kumao Kajiwara, at a shop in the Toshima suburb of Tokyo, and began producing spectacle lenses (which it still manufactures).[4] In 1938 it changed its name to Asahi Optical Co., Ltd. (旭光学工業株式会社, Asahi Kōgaku Kōgyō Kabushiki-gaisha), and by this time it was also manufacturing camera/cine lenses. In the lead-up to World War II, Asahi Optical devoted much of its time to fulfilling military contracts for optical instruments. At the end of the war Asahi Optical was disbanded by the occupying powers, being allowed to re-form in 1948. The company resumed its pre-war activities, manufacturing binoculars and consumer camera lenses for Konishiroku and Chiyoda Kōgaku Seikō (later Konica and Minolta respectively).

The period around 1950 marked the return of the Japanese photographic industry to the vigorous level of the late 1930s, and its emergence as a major exporter. The newly reborn industry had sold many of its cameras to the occupation forces (having had far more disposable income than the Japanese), which were well received.[5] The Korean War saw a huge influx of journalists and photographers to the Far East, where they were impressed by lenses from companies such as Nikon and Canon for their Leica rangefinder cameras, and also by bodies by these and other companies to supplement and replace the Leica and Contax cameras they were using. 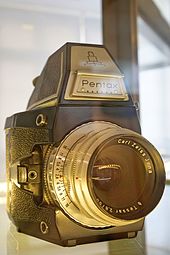 In 1952 Asahi Optical introduced its first camera, the Asahiflex (the first Japanese SLR using 35mm film). The name "Pentax" was originally a registered trademark of the East German VEB Zeiss Ikon (from "Pentaprism" and "Contax") and acquired by the Asahi Optical company in 1957. Since then the company has been primarily known for its photographic products, distributed 35mm equipment under the name "Asahi Pentax" and medium format 120 6x7cm equipment under the sub brand "Pentax 6x7" (from 1969 to 1990) and "Pentax 67" (from 1990 to 1999). Equipment was exported to the United States from the 1950s until the mid-1970s by Honeywell Corporation and branded as "Heiland Pentax" and later "Honeywell Pentax". The company was renamed Pentax Corporation in 2002. It was one of the world's largest optical companies, producing still cameras, binoculars, spectacle lenses, and a variety of other optical instruments. In 2004 Pentax had about 6000 employees.

In December 2006, Pentax started the process of merging with Hoya Corporation to form 'Hoya Pentax HD Corporation'.[6] Hoya's primary goal was to strengthen its medical-related business by taking advantage of Pentax's technologies and expertise in the field of endoscopes, intraocular lenses, surgical loupes, biocompatible ceramics, etc. It was speculated that Pentax's camera business could be sold off after the merger. A stock swap was to be completed by October 1, 2007 but the process was called off on April 11, 2007. Pentax president Fumio Urano resigned over the matter, with Takashi Watanuki taking over as president of Pentax.[7] However, despite Watanuki's previously stated opposition to a Hoya merger, on May 16 it was reported that Pentax had accepted "with conditions" a sweetened offer from Hoya, according to a source familiar with the matter.[8] Pentax was under increasing pressure from its major shareholders, Sparx Asset Management in particular, to accept Hoya's bid.

On August 6, 2007, Hoya completed a friendly public tender offer for Pentax and acquired 90.59% of the company.[9] On August 14, 2007, the company became a consolidated subsidiary of Hoya. On October 29, 2007, Hoya and Pentax announced that Pentax would merge with and into Hoya effective on March 31, 2008.[10] Hoya closed the Pentax-owned factory in Tokyo, and moved most of their operations to Southeast Asia. All professional (DA*) and consumer (DA, D-FA) lenses are produced in Vietnam, whereas DSLR cameras are produced in Philippines.[citation needed]

Japanese optical glass-maker Hoya Corporation stated on July 1, 2011, that it would sell its Pentax camera business to copier and printer maker Ricoh, in a deal the Nikkei business daily reported was worth about 10 billion yen ($124.2 million).[11] On July 29, 2011, Hoya transferred its Pentax imaging systems business to a newly established subsidiary called Pentax Imaging Corporation. On October 1, 2011, Ricoh acquired all shares of Pentax Imaging Corp. and renamed the new subsidiary Pentax Ricoh Imaging Company, Ltd.[12] Hoya will continue to use the Pentax brand name for their medical related products such as endoscopes. On August 1, 2013, the company name was changed to Ricoh Imaging Company Ltd.[13]

The corporation is best known for its "Pentax" brand cameras, starting with the pivotal "Asahi Pentax" single-lens reflex camera of 1957, which followed Asahi's first series of cameras, the Asahiflex of 1952 - these were the first Japanese-made SLRs for 35mm film, and the Asahiflex IIB of 1954 the first Japanese SLR with an instant-return mirror. The Asahi Pentax itself was the first Japanese fixed-pentaprism SLR. In 1969 under the sub brand "Pentax 6x7", the company started to produce medium format 120 6x7cm cameras. In 1990 the company renamed the sub brand from "Pentax 6x7" to "Pentax 67". The company produced Pentax 67 cameras until 1999 and ceased distribution in 2002. The success of the "Pentax" series was such that the business eventually renamed itself "Pentax Corporation" after the 35mm product line. Although the corporation ultimately merged into Hoya Corporation, it eventually was purchased by Ricoh, who continues to develop and market cameras under the Pentax brand.

In 2005, Pentax Corporation partnered with Samsung Techwin[14] to share work on camera technology and recapture market ground from Nikon and Canon.[15] Pentax and Samsung subsequently released new DSLR siblings from this agreement. The Pentax *ist DS and *istDL2 also appeared as the Samsung GX-1S and GX-1L, while the jointly developed (90% Pentax and 10% Samsung) Pentax K10D and K20D gave birth to the Samsung GX-10 and GX-20 respectively. Some Pentax lenses are also rebranded and sold as Samsung Schneider Kreuznach D-Xenon and D-Xenogon lenses for Samsung DSLRs. However, both brands are completely compatible with Pentax and Samsung DSLRs.