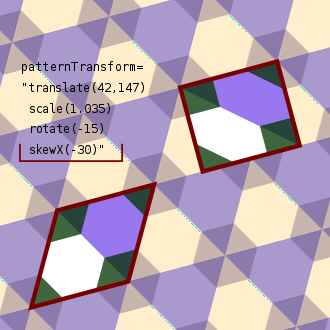 A composition of four mappings coded in SVG,
which transforms a rectangular repetitive pattern
into a rhombic pattern. The four transformations are linear.

More generally, a transformation in mathematics means a mathematical function (synonyms: "map" or "mapping"). A transformation can be an invertible function from a set X to itself, or from X to another set Y. The choice of the term transformation may simply indicate that the geometric aspects of a function are being considered (for example, with respect to invariants).

The set of all transformations on a given base set, together with function composition, forms a regular semigroup.