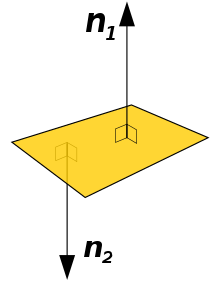 A polygon and its two normal vectors 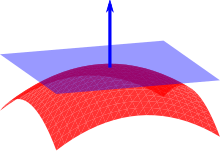 In geometry, a normal is an object such as a line, ray, or vector that is perpendicular to a given object. For example, in two dimensions, the normal line to a curve at a given point is the line perpendicular to the tangent line to the curve at the point. A normal vector may have length one (a unit vector) or its length may represent the curvature of the object (a curvature vector); its algebraic sign may indicate sides (interior or exterior).

In three dimensions, a surface normal, or simply normal, to a surface at point P is a vector perpendicular to the tangent plane of the surface at P. The word "normal" is also used as an adjective: a line normal to a plane, the normal component of a force, the normal vector, etc. The concept of normality generalizes to orthogonality (right angles).

The concept has been generalized to differentiable manifolds of arbitrary dimension embedded in a Euclidean space. The normal vector space or normal space of a manifold at point P is the set of vectors which are orthogonal to the tangent space at P. Normal vectors are of special interest in the case of smooth curves and smooth surfaces.

The normal is often used in 3D computer graphics (notice the singular, as only one normal will be defined) to determine a surface's orientation toward a light source for flat shading, or the orientation of each of the surface's corners (vertices) to mimic a curved surface with Phong shading.

Normal to surfaces in 3D space

For a convex polygon (such as a triangle), a surface normal can be calculated as the vector cross product of two (non-parallel) edges of the polygon.

For a plane given by the equation

For a plane whose equation is given in parametric form

where r0 is a point on the plane and p, q are non-parallel vectors pointing along the plane, a normal to the plane is a vector normal to both p and q, which can be found as the cross product

If a (possibly non-flat) surface S in 3-space R3 is parameterized by a system of curvilinear coordinates r(s, t) = (x(s,t), y(s,t), z(s,t)), with s and t real variables, then a normal to S is by definition a normal to a tangent plane, given by the cross product of the partial derivatives

, then a normal at a point

on the surface is given by the gradient

since the gradient at any point is perpendicular to the level set S.

, an upward-pointing normal can be found either from the parametrization

or more simply from its implicit form

Since a surface does not have a tangent plane at a singular point, it has no well-defined normal at that point: for example, the vertex of a cone. In general, it is possible to define a normal almost everywhere for a surface that is Lipschitz continuous. 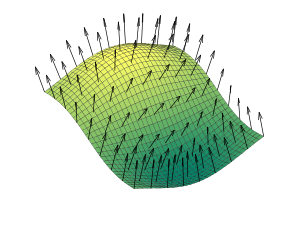 A vector field of normals to a surface

The normal to a (hyper)surface is usually scaled to have unit length, but it does not have a unique direction, since its opposite is also a unit normal. For a surface which is the topological boundary of a set in three dimensions, one can distinguish between the inward-pointing normal and outer-pointing normal. For an oriented surface, the normal is usually determined by the right-hand rule or its analog in higher dimensions.

If the normal is constructed as the cross product of tangent vectors (as described in the text above), it is a pseudovector.

Note: in this section we only use the upper 3x3 matrix, as translation is irrelevant to the calculation

When applying a transform to a surface it is often useful to derive normals for the resulting surface from the original normals.

Clearly choosing W such that

, will satisfy the above equation, giving a

, or an n′ perpendicular to t′, as required.

in the null space of the matrix

. That is, any vector orthogonal to all in-plane vectors is by definition a surface normal. Alternatively, if the hyperplane is defined as the solution set of a single linear equation

The definition of a normal to a surface in three-dimensional space can be extended to (n-1)-dimensional hypersurfaces in Rn. A hypersurface may be locally defined implicitly as the set of points

is a given scalar function. If

The normal line is the one-dimensional subspace with basis {n}.

The normal (affine) space at a point P of the variety is the affine subspace passing through P and generated by the normal vector space at P.

These definitions may be extended verbatim to the points where the variety is not a manifold.

This variety is the union of the x-axis and the y-axis.