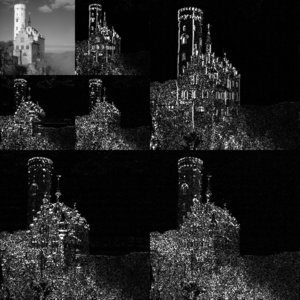 An example of the 2D discrete wavelet transform that is used in JPEG2000.
For broader coverage of this topic, see Wavelet.

In mathematics, a wavelet series is a representation of a square-integrable (real- or complex-valued) function by a certain orthonormal series generated by a wavelet. This article provides a formal, mathematical definition of an orthonormal wavelet and of the integral wavelet transform.[1][2][3][4]

is called an orthonormal wavelet if it can be used to define a Hilbert basis, that is a complete orthonormal system, for the Hilbert space

The Hilbert basis is constructed as the family of functions

by means of dyadic translations and dilations of

If under the standard inner product on

is the Kronecker delta.

Completeness is satisfied if every function

may be expanded in the basis as

with convergence of the series understood to be convergence in norm. Such a representation of f is known as a wavelet series. This implies that an orthonormal wavelet is self-dual.

are then given by

is called the binary dilation or dyadic dilation, and

is the binary or dyadic position.

The fundamental idea of wavelet transforms is that the transformation should allow only changes in time extension, but not shape. This is affected by choosing suitable basis functions that allow for this.[how?] Changes in the time extension are expected to conform to the corresponding analysis frequency of the basis function. Based on the uncertainty principle of signal processing,

The higher the required resolution in time, the lower the resolution in frequency has to be. The larger the extension of the analysis windows is chosen, the larger is the value of

In other words, the basis function

has been filtered. The transformed signal provides information about the time and the frequency. Therefore, wavelet-transformation contains information similar to the short-time-Fourier-transformation, but with additional special properties of the wavelets, which show up at the resolution in time at higher analysis frequencies of the basis function. The difference in time resolution at ascending frequencies for the Fourier transform and the wavelet transform is shown below. Note however, that the frequency resolution is decreasing for increasing frequencies while the temporal resolution increases. This consequence of the Fourier uncertainty principle is not correctly displayed in the Figure.

This shows that wavelet transformation is good in time resolution of high frequencies, while for slowly varying functions, the frequency resolution is remarkable.

Another example: The analysis of three superposed sinusoidal signals

Wavelet compression is a form of data compression well suited for image compression (sometimes also video compression and audio compression). Notable implementations are JPEG 2000, DjVu and ECW for still images, CineForm, and the BBC's Dirac. The goal is to store image data in as little space as possible in a file. Wavelet compression can be either lossless or lossy.[5] Wavelet coding is a variant of discrete cosine transform (DCT) coding that uses wavelets instead of DCT's block-based algorithm.[6]

Using a wavelet transform, the wavelet compression methods are adequate for representing transients, such as percussion sounds in audio, or high-frequency components in two-dimensional images, for example an image of stars on a night sky. This means that the transient elements of a data signal can be represented by a smaller amount of information than would be the case if some other transform, such as the more widespread discrete cosine transform, had been used.

Discrete wavelet transform has been successfully applied for the compression of electrocardiograph (ECG) signals[7] In this work, the high correlation between the corresponding wavelet coefficients of signals of successive cardiac cycles is utilized employing linear prediction.

Wavelet compression is not good for all kinds of data: transient signal characteristics mean good wavelet compression, while smooth, periodic signals are better compressed by other methods, particularly traditional harmonic compression (frequency domain, as by Fourier transforms and related).

See Diary Of An x264 Developer: The problems with wavelets (2010) for discussion of practical issues of current methods using wavelets for video compression.

First a wavelet transform is applied. This produces as many coefficients as there are pixels in the image (i.e., there is no compression yet since it is only a transform). These coefficients can then be compressed more easily because the information is statistically concentrated in just a few coefficients. This principle is called transform coding. After that, the coefficients are quantized and the quantized values are entropy encoded and/or run length encoded.

A few 1D and 2D applications of wavelet compression use a technique called "wavelet footprints".[8][9]

For most natural images, the spectrum density of lower frequency is higher.[10] As a result, information of the low frequency signal (reference signal) is generally preserved, while the information in the detail signal is discarded. From the perspective of image compression and reconstruction, a wavelet should meet the following criteria while performing image compression:

Wavelet image compression system involves filters and decimation, so it can be described as a linear shift-variant system. A typical wavelet transformation diagram is displayed below:

and a high pass filter

). The compression and reconstruction system generally involves low frequency components, which is the analysis filters

for image compression and the synthesis filters

for reconstruction. To evaluate such system, we can input an impulse

and observe its reconstruction

; The optimal wavelet are those who bring minimum shift variance and sidelobe to

By observing the impulse responses of the two filters, we can conclude that the second filter is less sensitive to the input location (i.e. it is less shift variant).

Another important issue for image compression and reconstruction is the system's oscillatory behavior, which might lead to severe undesired artifacts in the reconstructed image. To achieve this, the wavelet filters should have a large peak to sidelobe ratio.

So far we have discussed about one-dimension transformation of the image compression system. This issue can be extended to two dimension, while a more general term - shiftable multiscale transforms - is proposed.[12]

As mentioned earlier, impulse response can be used to evaluate the image compression/reconstruction system.

For the input sequence

after one level of decomposition is

goes through decimation by a factor of two, while

is a low pass filter. Similarly, the next reference signal

goes through decimation by a factor of two. After L levels of decomposition (and decimation), the analysis response is obtained by retaining one out of every

On the other hand, to reconstruct the signal x(n), we can consider a reference signal

. If the detail signals

are equal to zero for

, then the reference signal at the previous stage (

, which is obtained by interpolating

. Similarly, the procedure is iterated to obtain the reference signal

. After L iterations, the synthesis impulse response is calculated:

, which relates the reference signal

and the reconstructed signal.

To obtain the overall L level analysis/synthesis system, the analysis and synthesis responses are combined as below:

Finally, the peak to first sidelobe ratio and the average second sidelobe of the overall impulse response

can be used to evaluate the wavelet image compression performance.

Wavelets have some slight benefits over Fourier transforms in reducing computations when examining specific frequencies. However, they are rarely more sensitive, and indeed, the common Morlet wavelet is mathematically identical to a short-time Fourier transform using a Gaussian window function.[13] The exception is when searching for signals of a known, non-sinusoidal shape (e.g., heartbeats); in that case, using matched wavelets can outperform standard STFT/Morlet analyses.[14]

The wavelet transform can provide us with the frequency of the signals and the time associated to those frequencies, making it very convenient for its application in numerous fields. For instance, signal processing of accelerations for gait analysis,[15] for fault detection,[16] for design of low power pacemakers and also in ultra-wideband (UWB) wireless communications.[17][18][19]