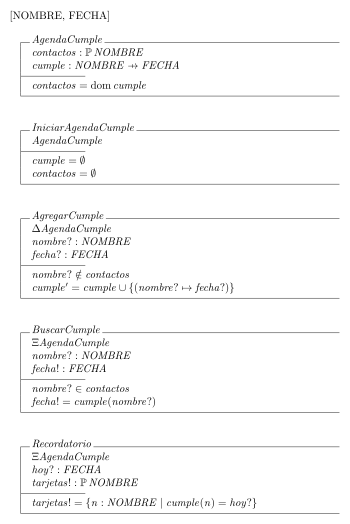 An example of a formal specification (in Spanish) using the Z notation.

The Z notation /ˈzɛd/ is a formal specification language used for describing and modelling computing systems. It is targeted at the clear specification of computer programs and computer-based systems in general.

In 1974, Jean-Raymond Abrial published "Data Semantics".[1] He used a notation that would later be taught in the University of Grenoble until the end of the 1980s. While at EDF (Électricité de France), Abrial wrote internal notes on Z.[citation needed] The Z notation is used in the 1980 book Méthodes de programmation.[2]

Z was originally proposed by Abrial in 1977 with the help of Steve Schuman and Bertrand Meyer.[3] It was developed further at the Programming Research Group at Oxford University, where Abrial worked in the early 1980s, having arrived at Oxford in September 1979.

Abrial has said that Z is so named "Because it is the ultimate language!"[4] although the name "Zermelo" is also associated with the Z notation through its use of Zermelo–Fraenkel set theory.

Z is based on the standard mathematical notation used in axiomatic set theory, lambda calculus, and first-order predicate logic. All expressions in Z notation are typed, thereby avoiding some of the paradoxes of naive set theory. Z contains a standardized catalogue (called the mathematical toolkit) of commonly used mathematical functions and predicates, defined using Z itself.

Because Z notation (just like the APL language, long before it) uses many non-ASCII symbols, the specification includes suggestions for rendering the Z notation symbols in ASCII and in LaTeX. There are also Unicode encodings for all standard Z symbols.[5]

ISO completed a Z standardization effort in 2002. This standard[6] and a technical corrigendum[7] are available from ISO free: