The 1965 Tasman Series was a motor racing competition staged in New Zealand and Australia for cars complying with the Tasman Formula.[1] The series, which began on 9 January and ended on 1 March after seven races,[2] was the second Tasman Series.[1] It was won by Jim Clark, driving Lotus 32B Coventry Climax.[3] 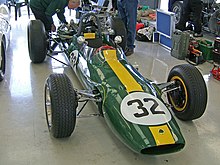 The series was contested over seven races.[2]

Points were awarded for the first six positions at each race as shown in the following table.[2]

Each driver could retain points from the New Zealand Grand Prix, the two best performances in the other three New Zealand races, and from all Australian races.[2]

Race positions for which points were earned but not retained are shown on the table below within brackets.