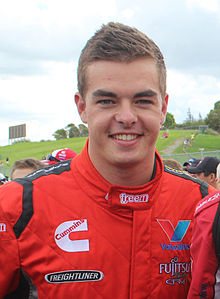 Scott McLaughlin contested the series as the defending driver's champion. McLaughlin successfully defended his championship title,[3] and in doing so, he broke Craig Lowndes' 1996 record for the most wins in a championship year when he recorded his seventeenth win at Pukekohe Park.[4][a] His team, DJR Team Penske, won their second teams' championship. Ford secured the manufacturers' title at the Ipswich SuperSprint.[6]

The following teams and drivers competed in the 2019 championship.

Ford introduced the Mustang as a replacement for the FG X Falcon.

The sixth generation Ford Mustang, the Mustang GT, was homologated for the 2019 championship. The Mustang was a replacement for the FG X Falcon, which was used between 2015 and 2018.[35][36] Tickford Racing and DJR Team Penske oversaw the development of the car, with Ford Performance providing additional technical support.[37][38][39] Ford Australia provided financial support in developing the car, but no team was officially recognised as a factory team.[40] The homologation process required modifications to the bodywork to fit the series' control chassis, but the car continued to use the V8 engine used by the FG X Falcon.[41][42] The decision to return the Mustang to the series was made as Australia's domestic production of the Ford Falcon ceased in 2016.[43] The Mustang's return marked the first time since 1990 that a Mustang has contested the premier class of Australian motorsport.[44] The car completed the homologation process in December 2018 and was subsequently approved for competition by the Supercars Commission.[45]

Nissan withdrew its factory support from the championship at the end of 2018 as the company elected to change its global motorsport strategy and focus on its Formula E entry. Kelly Racing—who raced under the Nissan Motorsport name between 2013 and 2018—continued to compete with the Altima L33 chassis under licence from the company.[46][47] Nissan's decision to withdraw from the championship followed the Altima being withdrawn from sale in Australia in 2017.[48]

The number of entries was reduced from twenty-six to twenty-four with both Tickford Racing and Triple Eight Race Engineering returning a Racing Entitlement Contract (REC) to the sport's management.[49][50][51] 23Red Racing formed a partnership with Tickford Racing which saw it become a satellite team of Tickford.[52] Matt Stone Racing upgraded from a VF Commodore to a ZB Commodore and are receiving technical support from Triple Eight Race Engineering.[53]

Michael Caruso left Kelly Racing, joining Tickford Racing as an endurance co-driver. Caruso's seat was filled by Garry Jacobson, who made his full time début in the championship with the team.[7][54]

Craig Lowndes and Tim Blanchard retired from full-time competition at the end of the 2018 championship.[55] Both returned as endurance co-drivers with Triple Eight Race Engineering and Brad Jones Racing respectively.[8][56][57] Blanchard's seat at Tim Blanchard Racing was filled by Macauley Jones.[58] Jones made his full time début in the championship, after having previously entered as a wildcard at selected events in 2017 and 2018.

Richie Stanaway was withdrawn halfway through the Winton SuperSprint and missed the next three rounds, due to a neck injury. He was replaced for the remainder of the round, and the following Darwin Triple Crown by Chris Pither, who had already been nominated as Stanaway's partner for the endurance races.[63] Michael Caruso stepped in for the Townsville 400 and Ipswich SuperSprint, returning to the team for the first time since 2012.[31] Stanaway was stood down halfway through the Gold Coast 600, due to disciplinary reasons. Chris Pither became the main driver for the Sunday race while Super2 and TCR Australia driver Dylan O'Keeffe made his debut with the team.

The calendar was reduced to fifteen rounds in 2019, with the following events scheduled to take place:

The 2019 calendar underwent a radical revision compared to the 2018 calendar. The Sydney SuperNight 300 was removed from the calendar entirely and was replaced by a new night race at Barbagallo Raceway. The change was made with the long-term view to running the Sydney round in January 2020 as part of a proposed move to a "summer series" format that would see the championship run primarily in the summer months.[64]

The Sandown 500 moved to a late-season slot in November, becoming the final round of the Pirtek Enduro Cup, to avoid clashing with the AFL and NRL finals series. The Auckland SuperSprint was brought forward to September, making the Sandown 500 the penultimate round of the championship.[64] Changes to the Formula One calendar meant that the Australian Grand Prix was run earlier in the year than it was in 2018, and thus the Supercars support races was also moved forward. The Adelaide 500 was subsequently brought forward to remain the opening round of the season.

As a cost reduction measure, the use of twin-spring dampers were banned with teams required to use linear spring dampers.[66] A new specification of transaxle developed by Xtrac was introduced.[67]

Champion Manufacturer of the Year

The Manufacturers award was won by Ford.

The Pirtek Enduro Cup was won by Jamie Whincup and Craig Lowndes.[70]