Albert Park is an inner suburb of Melbourne, Australia, 4 km south of Melbourne's central business district. Its local government area is the City of Port Phillip.

The suburb of Albert Park extends from the St Vincent Gardens to Beaconsfield Parade and Mills Street. It was settled residentially as an extension of Emerald Hill (South Melbourne). It is characterised by wide streets, heritage buildings, terraced houses, open air cafes, parks and significant stands of mature exotic trees, including Canary Island Date Palm and London Planes.

Since 1996, the Albert Park Circuit has been home to the Australian Grand Prix.

Indigenous Australians first inhabited the area that is now Albert Park around 40,000 years ago.[citation needed] The area was a series of swamps and lagoons. The main park after which the suburb was named was declared a public park and named in 1864 to honour Queen Victoria's consort, Prince Albert.[2]

Albert Park was used as a garbage dump, a military camp and for recreation before the artificial lake was built. In 1854 a land-subdivision survey was done from Park Street, South Melbourne, to the northern edge of the parkland (Albert Road). St Vincent Gardens were laid out and the surrounding streets home to the city's most successful citizens. Street names commemorated Trafalgar and Crimean War personalities.[3]

St Vincent Gardens in 1878, Rochester Terrace is in the background

Heritage Victoria notes that Albert Park's St Vincent Gardens "is historically important as the premier 'square' development in Victoria based on similar models in London. It is significant as the largest development of its type in Victoria and for its unusual development as gardens rather than the more usual small park" and "was first laid out in 1854 or 55, probably by Andrew Clarke, the Surveyor-General of Victoria. The current layout is the work of Clement Hodgkinson, the noted surveyor, engineer and topographer, who adapted the design in 1857 to allow for its intersection by the St Kilda railway line. The precinct, which in its original configuration extended from Park Street in the north to Bridport Street in the south and from Howe Crescent in the east to Nelson Road and Cardigan Street in the west, was designed to emulate similar 'square' developments in London, although on a grander scale. The main streets were named after British naval heroes. The development of the special character of St Vincent Place has been characterised, since the first land sales in the 1860s, by a variety of housing stock, which has included quality row and detached houses and by the gardens which, although they have been continuously developed, remain faithful to the initial landscape concept."

St Vincent's is a garden of significant mature tree specimens. It is registered with the National Trust and is locally significant for the social focus the gardens provide to the neighbourhood. Activities in the park range from relaxing walks, siestas to organised sports competition. The Albert Park Lawn Bowls Club was established in 1873 and the Tennis Club established 1883, on the site of an earlier croquet ground.

Albert Park features part of the massive Albert Park and Lake (formerly South Park in the 19th century until it was also renamed after Prince Albert) and is located nearby. It is a significant state park managed by Parks Victoria. It is also known as the site of the Albert Park Circuit.

Commercial centres include Bridport Street, with its cafes and shops[4] and Victoria Avenue, known for its cafes, delicatessens and boutiques.

Albert Park has a long beach frontage, with several distinctive features, including many grand buildings (such as the Victoria Hotel, a grand hotel and former coffee palace, now café bar, built in 1887) and Victorian terrace homes; Kerferd Kiosk, an iconic Edwardian bathing pavilion and Kerferd Pier, which terminates Kerferd Road and is a jetty onto Port Phillip, used for fishing by many and sharks have occasionally been found around it.[citation needed]

The lake is popular with strollers, runners and cyclists. Dozens of small yachts sail around the lake on sunny days. Only the north eastern part of the park and lake is actually in the suburb, the rest is in the neighbouring suburbs of South Melbourne, Melbourne, Middle Park and St Kilda. 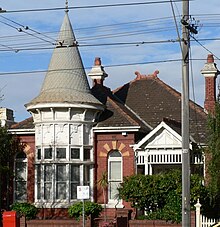 Albert Park has outstanding examples of Victorian and Edwardian housing

Albert Park is composed mainly of Victorian terrace and semi-detached housing. Many residential areas are in heritage overlays to protect their character. Boyd Street, a leafy backstreet near Middle Park, is a fine example of this.

Until 1987, Albert Park was serviced by the St Kilda railway line, with Albert Park railway station being located at Bridport Street. The line has since been converted to serve trams, and forms a large part of the route 96 tram line.

CDC Melbourne's route 606 runs through the suburb. There are segregated cycle facilities along the beach and Canterbury Roads, with marked bicycle lanes elsewhere. 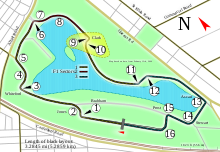 The suburb has been home to the Formula One Australian Grand Prix since 1996. The Albert Park Circuit runs on public roads. The choice of Albert Park as a Grand Prix venue was controversial, with protests by the Save Albert Park group. In preparing the Reserve for the race existing trees were cut down and replaced during landscaping, roads were upgraded, and facilities were replaced. Both major political parties support the event. The Melbourne Supercars Championship is also held on the same circuit.

Albert Park is the home of soccer club South Melbourne FC who play out of Lakeside Stadium; aptly named due to its positioning next to Albert Park Lake. Lakeside Stadium (known then as Bob Jane Stadium) was redeveloped in 2010 to include an international standard athletics track, as well as new grandstands and administrative facilities, and is also the home of the Victorian Institute of Sport. The stadium was built on the site of the old Lake Oval, which was an historic Australian rules football venue of South Melbourne Football Club.

The Melbourne Sports & Aquatic Centre (MSAC) is a large swimming centre, which hosted squash, swimming, diving events and table tennis during the 2006 Commonwealth Games. The MSAC is also the home of the Melbourne Tigers that play in the South East Australian Basketball League.

In December 2006 polo returned to Albert Park Reserve after an absence of 100 years.

Albert Park is home to a parkrun event. The event at Albert Park is held at 8am every Saturday and starts in the Coot Picnic area, opposite the MSAC.[5]