The Australian GT Championship is a CAMS-sanctioned national title for drivers of GT cars, held annually from 1960 to 1963, from 1982 to 1985 and from 2005. Each championship up to and including the 1963 title was contested over a single race and those after that year over a series of races. The categories which have contested the championship have not always been well defined and often have become a home for cars orphaned by category collapse or a sudden change in regulation. 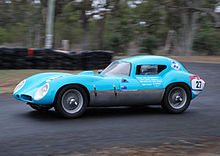 In the first era the championship races were open to closed roof cars (not necessarily production based) complying with CAMS Appendix K regulations. Appendix K catered for modified production Grand Touring cars (such as Lotus Elite), sports cars (such as Jaguar D-Type) fitted with roofs, specials (such as the Centaur Waggott) and touring cars modified beyond the limits of the then current Appendix J regulations. Numbers dropped rapidly away as the years went on and both the category and the championship were discontinued at the end of 1963.

Porsche 935's dominated early with 1980 Formula One World Champion Alan Jones winning the 1982 Championship in an entry backed by former race driver 's Porsche Cars Australia (Hamilton was Australia's major Porsche distributor at the time). Porsche won again in 1983, this time with driving the 1982 title winning car he had acquired from Hamilton, while both the 1984 and 1985 championships were won by Allan Grice and respectively, both driving the ex-Bob Jane DeKon Chevrolet Monza with a 6.0 L V8 engine that produced a reported 600 bhp (447 kW; 608 PS), with Thomson also driving his exotic Chevrolet V8 powered twin turbo Mercedes-Benz 450 SLC in the 1985 series. The Thomson Mercedes was alleged to produce over 1,000 bhp (746 kW; 1,014 PS) making it arguably the most powerful race car in Australian motor racing. The downside though was that without a large budget, the Thompson Mercedes suffered numerous reliability problems (usually turbo) and neither Thompson nor his team driver (1985–86) Brad Jones, or indeed John Bowe who had also driven the car in the early 1980s while Thompson was in a short lived retirement, were able to show its true potential.

By 1985 the field was mostly Sports Sedans bolstered with recently obsolete (from the end of 1984) Group C Touring Cars and the championship was run concurrently with the Australian Sports Car Championship. Veteran driver Kevin Bartlett introduced a very quick Ground effects De Tomaso Pantera in 1985 which brought some much needed spice to the GT category.

For 1986 Sports Sedans went their own way. Within a couple of years Porsche drivers had their own series with the Porsche Cup. 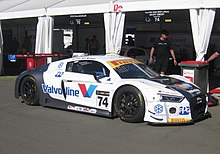 The Australian GT Championship was revived a second time in 2005 after the disbandment of the Australian Nations Cup Championship. Most of the competing 2004 cars remained eligible for 2005, although the controversial Holden Monaro 427C's which had won the two Bathurst 24 Hour races in 2002 and 2003 were a notable exception. This was because the Monaros under Nations Cup rules had been permitted to use the 7.0 litre, 427 cui LS6 Chevrolet V8 engine that had been used successfully in the Chevrolet Corvette C5-R, while the road going CV8 Monaros only came with the 5.7-litre Gen III V8. The Australian Porsche Drivers Challenge (the former Australian Porsche Cup) also was merged into the GT Championship.

The FIA GT3 regulations, like those in use in the FIA GT3 European Championship was the core of the new series. The series vehicles reflected GT3, Porsches, Ferraris, Lamborghinis, the controversial Mosler, although series regulations usually specified cars be two-three years old to cut down on costs. Competing drivers are seeded and penalised so as not to flood the series with professional drivers from other categories and increasing there has been an emphasis on longer races, sometimes allowing for more than one driver per car.

The series has grown steadily, helped by the transition of the Bathurst 12 Hour race from a production car race to a GT race. Manufacturers have diversified widely from its mostly Porsche base and in addition to the 12 Hour has also seen the creation of other long distance races, the and the Highlands 101 in New Zealand.

The Australian GT Trophy Series was introduced as a support series in 2016, featuring older-specification GT3, GT4, Challenge and MARC cars. GT4 cars will be integrated into the main championship in 2018.