The BMW E30 is the second generation of BMW 3 Series, which was produced from 1982 to 1994 and replaced the E21 3 Series. The model range included 2-door sedan and convertible body styles,[4][5] as well as being the first 3 Series to be produced in 4-door sedan and wagon/estate body styles. It was powered by four-cylinder petrol, six-cylinder petrol and six-cylinder diesel engines, the latter a first for the 3 Series. The E30 325iX model was the first BMW to have all-wheel drive.

The first BMW M3 model was built on the E30 platform and was powered by the high-revving BMW S14 four-cylinder petrol engine, which produced 175 kW (235 bhp) in its final iteration.[6] The BMW Z1 roadster was also based on the E30 platform. Following the launch of the E36 3 Series in 1990, the E30 began to be phased out. 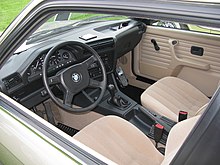 Interior of a 316i model

Development of the E30 3 Series began in July 1976, with styling being developed under chief designer Claus Luthe[7] with exterior styling led by Boyke Boyer.[8] In 1978, the final design was approved, with design freeze (cubing process) being completed in 1979. BMW's launch film for the E30 shows the design process including Computer-aided design (CAD), crash testing and wind-tunnel testing.[9] The car was released at the end of November 1982.[10][11][12][13]

Externally, the E30's appearance is very similar to twin headlight versions of its E21 predecessor, however there are various detail changes in styling to the E30. Major differences to the E21 include the interior and a revised suspension, the latter to reduce the oversteer for which the E21 was criticised.[14]

In 1985 the exterior and interior trim were updated. The 323i model was replaced with the 325i at this time and the diesel-engined 324d was introduced.[15] A factory convertible entered the model range. However, the Baur remained on sale, alongside the factory convertible. The M3 convertible was only offered for the European market.

At the Frankfurt Motor Show in September 1987, BMW introduced a major update to the E30 (often called Series 2).[15][16] The changes to the lineup were the addition of the Touring (station wagon) variant and removal of the 325e model. The 1987 update models remained largely unchanged until the end of production, with the addition of the 318is model in 1989.

External styling changes included redesigned rear lights, front bumper and a reduction in the amount of chrome trim.[16] The four-cylinder engine was upgraded from the BMW M10 to the BMW M40 and various other mechanical changes were made. Rust protection was improved with the update.

In addition to the two-door sedan and Baur convertible body styles of its E21 predecessors, the E30 later also became available as a four-door sedan and five-door station wagon (marketed as "Touring").[17] 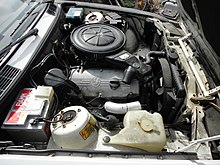 The 318iS was released in 1989, using the new M42 engine and only being available with two doors.[41][42] This is the most modern engine available in the E30 range, incorporating DOHC, the updated Bosch Motronic 1.3, hydraulic valve adjusters and coil-on-plug ignition. In some markets, the M42 engine was used in the 318i/318iC models, instead of the M40.

An economy version called the 325e was released with a lower revving, more fuel efficient engine. The e is an abbreviation for eta, which is used to represent the thermal efficiency of a heat engine. To maximise low-rev torque, the 325e engine was the largest available in an E30 (aside from the 333i model, which was only sold in South Africa). The 325e engine had a longer stroke than the 325i version, with a more restrictive head, four cam bearings instead of seven, and single valve springs (instead of the dual valve springs used by the 325i version). For versions without a catalytic converter, the 325e engine produced 90 kW (121 bhp) at 4250 rpm and 240 N⋅m (177 lbf⋅ft) at 3250 rpm.[33][48] By comparison, peak torque for the 325i engine was 215 N⋅m (159 lb⋅ft) at 4000 rpm. 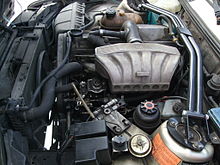 In 1983 the 324td was unveiled at the IAA, Germany. The M21 engine used a Garrett turbocharger (without an intercooler). The engine has a capacity of 2,443 cc (149 cu in) and uses mechanical fuel injection.

In 1985 BMW introduced the 324d, a naturally aspirated version of the same M21 engine, which was popular in countries with a high motor vehicle tax.[51]

In 1987 an electronically controlled fuel pump was used[52][53] which increased the torque output by 10 N⋅m (7 lb⋅ft). The updated engine has a smaller turbocharger, decreasing turbo lag.[54]

In total, six transmissions were available for the various models of the E30: four manuals, and two automatics. The E30 was offered with rear-wheel drive, or permanent all-wheel drive (325iX saloons and estaes only).

One of the features that added to the roominess of the E30 was the suspension. The front MacPherson struts and rear semi-trailing arm suspension were a compact arrangement that left a lot of cabin and boot space for the car's overall size. The semi-trailing arms have been criticized for the dynamic toe and camber changes inherent to the suspension geometry, causing bump steer in hard cornering situations (such as racing and autocross). Nonetheless, reviewers praised the handling of the E30.[63][64][65] 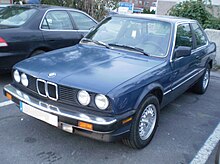 The model range in the United States consisted of the following:

The primary distinctive feature of the BMW E30 models produced for the North American market in 1984–1987 is the protruding front and rear aluminum bumpers. These bumpers are commonly known as "diving boards."[69] In 1987, the anodized aluminum bumpers for the North American market were shortened by revising the cover/fillers and shortening the shock absorbers on which they were mounted. In mid-1988 (for model year 1989), shorter body-coloured plastic bumpers replaced the aluminium ones altogether.[70][71]

In South Africa, only the two-door and four-door sedans were built, four cylinder gasoline (petrol) models production continued there until 1992.

Despite the introduction of the M40 engine, the old M10-powered 316 continued to be sold in South Africa until 1991, gaining the new bumpers when the range was updated.[citation needed] 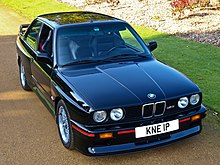 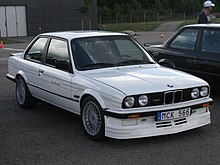 For Portugal and Italy only, due to considerably higher taxes for cars with engines exceeding 2000 cc, a special model was created: the 320is.[72] The four-door version appeared in the dealers' showrooms in September 1987 while the two-door followed in March 1988. Production of the 320is continued until 1991.

The interior of the 320is was identical to that of other 3 Series models, except an M3 instrument cluster (which features an oil temperature gauge instead of a fuel economy gauge) was used. The 320is was sold for three years, with 1,206 four-doors and 2,542 two-doors produced.[75]

In New Zealand, where the M3 was never sold by BMW, the local importer created a sporting version of the sedan called M325i. About 100 such cars were imported beginning in late 1986 until at least 1990.[76] Fitted with the standard non-catalyzed 125 kW (168 bhp) 2.5 litre engine they benefited from a Motorsport tuned suspension, the M-Technic body package, 15-inch BBS cross-spoke wheels with wide, low profile (225/50) tyres, and a limited-slip differential.[76] The M325i is quite similar to the British market 325i Sport, also developed as a response to the absence of a right-hand-drive M3.

BMW South Africa's Motorsport division created the 333i in 1985 by fitting the 3.2 L M30 "big six" engine to a two-door E30.[77] The resulting 333i was a success in South African saloon car racing. These cars were built with help from Alpina in Buchloe, Germany.[78][79] Due to the space constraints caused by the large M30 engine, the buyer was forced to choose between air conditioning (highly desirable in South Africa) and power steering. The 333i was produced from 1985 to 1987 and only 204 cars were produced.[80]

The John Player Special Edition is an Australian-only model built as a tribute to the M3,3 & 6 Series race cars competing in local touring car racing. JPS refers to the BMW race team sponsor, John Player Special cigarettes. The cars are based on a 323i manual "coupés",[85] painted in black with gold pinstripes and gold BBS wheels. They also had Recaro sports seats, JPS badging, a limited slip differential, sports suspension, a sunroof and a body kit.[86] The initial production run was 15 cars, with a small number of additional cars produced afterwards.[86]

Models sold in Indonesia and Thailand used complete knock-down kits produced in Germany, which were assembled in Jakarta and Bangkok respectively.[90][91]

Production of the E30 began to wind down in 1990, due to the introduction of the E36 3 Series coupé models. Sedan production concluded on April 30, 1991 at Regensburg. Other variants were phased out gradually, until the final E30 model, a Touring, was produced in 1994, and sold as a 1995 model year.[95]