The BMW E36 is the third generation of the BMW 3 Series range of compact executive cars, and was produced by the German automaker BMW from 1990 to 2000. The initial models were of the four-door sedan body style, followed by the coupe, convertible, wagon ("Touring"), hatchback ("Compact") and the rare four-door convertible Baur TC4 in later years.

The E36 was the first 3 Series to be offered in a hatchback body style. It was also the first 3 Series to be available with a six-speed manual transmission (in the 1996 M3), a five-speed automatic transmission and a four-cylinder diesel engine. The multi-link rear suspension was also a significant upgrade as compared to the previous generations of the 3 Series. All-wheel drive was not available for the E36, unlike the previous (E30) and successive (E46) generations.

The E36 was named in Car and Driver magazine's 10Best list for every year it was on sale.[4]

The high performance E36 M3 is powered by the BMW S50 or BMW S52 straight-six engine (depending on country). The E36 M3 was introduced in 1992 and was available in coupé, sedan and convertible body styles.

Following the introduction of its successor, the E46 3 Series in 1998, the E36 began to be phased out and was eventually replaced in 1999.

Development of the E36 began in 1981[5] and the exterior design was heavily influenced by aerodynamics, specifically the overall wedge shape, headlight covers and smaller wing mirrors.[6] The lead designers were Pinky Lai[7] and Boyke Boyer.[8][9]

The body styles of the range are:

For the six-cylinder models, the E36 was launched with the then-new BMW M50 DOHC petrol engine. In late 1992 the M50TU versions added single-VANOS (variable valve timing), which increased torque (peak power was unchanged). In 1995, the BMW M52 engine replaced the M50TU, resulting in the 328i model replacing the 325i and the addition of a new mid-range 323i model (powered by a 2.5 litre version of the M52).

Initially, the turbocharged straight-six BMW M51 engine was used in the E36 325td model. In 1993, the 325tds model was released, which added an intercooler to the M51. In 1994, the 318tds model was introduced, powered by the four-cylinder BMW M41 turbocharged and intercooled engine.

The E36 was produced with the following transmissions:

All models are rear-wheel drive, since the E36 was not produced with all-wheel drive (unlike its predecessor and successor).

The sedan, coupé, convertible and Touring models use the "Z-axle" multilink suspension in the rear, which was introduced in the BMW Z1 roadster.

The hatchback ("Compact") models use a rear semi-trailing arm suspension based on the older E30 3 Series design. This was done in order to save space due to the truncated rear end of the hatchback.

The E36 M3 was launched in 1992 and is powered by the BMW S50 and BMW S52 straight-six engines. It was produced in coupé, sedan and convertible body styles. 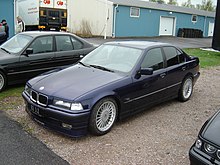 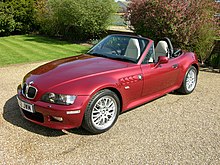 The North American model range consisted of the models listed below. The 318i models were powered by the BMW M42 engine, which was used in the 318is model sold in other countries.

Geoff Brabham and his younger brother David Brabham won the 1997 AMP Bathurst 1000 at the Mount Panorama Circuit in Bathurst, Australia driving a Super Touring BMW 320i for BMW Motorsport Australia.