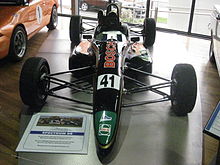 Borland Racing Developments was formed in 1984 to prepare and engineer cars for the Australian Formula 2 Championship. Four championships were secured in the next five years, after which Michael Borland turned his attention to producing the Spectrum Formula Ford and Sabre Formula Vee racing cars.

The Spectrum chassis established itself in the local Formula Ford market, taking a second for Jason Bargwanna in the 1996 title race. He gained a 1-2 in the 1998 Australian Championship for Adam Macrow and Christian Jones. The strength and popularity of the chassis grew with ongoing development and since 2004, the Spectrum has been the most consistently successful brand in Australian Formula Ford Championship racing.[citation needed]

In 2000, a New Zealand title to Phil Hellebrekers was the first international crown for the marque. In 2006 a Spectrum model 011 was built for the UK championship. On the Brands Hatch GP circuit, John Martin took a resounding victory in the chassis' debut weekend. This win was the impetus to appoint a UK agent in Mark Bailey Racing Ltd, which culminated in leading UK championship team Kevin Mills Racing switching to the Spectrum chassis for the 2008 season. With pole positions and race wins with KMR in 2008 and 2009, Spectrums are regular front runners in the UK championship.[citation needed]

BRD continues to develop a business as a specialist fabricator, meeting the demands of Daytona Sportscar production, historic restoration projects and production of specialty parts for the motor racing industry.

During 2007, the Braeside factory was doubled in size to accommodate the existing workload and to provide capacity for new projects. Amongst the first of these projects were the Spectrum F2000 (the slicks and wings racer for the US market) and the Sabre 02 Formula Vee 1600.

With both the UK and Australia adopting the Ford Duratec 1600 cc motor (as used in the Ford Fiesta road cars) for Formula Ford competition from the 2006 season, it provided an opportune time to release the next evolution in the Spectrum line; the 011. Given how successful the 010 of 2004 and 2005 had been, the focus with the 011 was to fine-tune the chassis and suspension to maximise the benefits of the reduced weight and increased power from the new engine.

Success with the new model was immediate; John Martin won the inaugural Fiesta powered Formula Ford round on his way to the 2006 Australian title. During that season, BRD built a Spectrum 011 to the UK regulations and John delivered a victory at the Brands Hatch UKFFC round in the car's UK debut weekend. The 011 chassis dominated the Australian championship and continued to make its mark internationally.

The 2010 Spectrum 012 Formula Ford featured revisions to the chassis and bodywork aimed at improving both the performance and safety of the car. Knowledge gained from wind tunnel and real world testing resulted in improving the cars aerodynamic package.[citation needed] With optimised airflow over the car and to the engine, drivers enjoyed better straight line speed resulting from better engine performance and lower drag.[citation needed] A hallmark of the Spectrum has been the inability of rival chassis to gain a significant slipstream when following[citation needed]; this was further enhanced by the revised design.[citation needed]

Chaz Mostert dominated the opening round of the 2010 Genuine Ford Parts Australian Formula Ford Championship, which was the international competition debut for all of the 2010 chassis. Mostert qualified the Synergy Motorsport Spectrum 012 on pole and won the round, setting a new lap record in the process.[citation needed]

As with all models since 2004, the new Spectrum included as standard lightweight components offered as expensive options on other chassis. The cars feature:

BRD sold 23 Sabre 01 Formula Vee racing cars between 1993 and 2000. Technical changes within the Formula Vee category and the demands of the rapidly growing Spectrum Formula Ford business placed the Sabre project on hold for a number of years.

By 2007, the Vee category had transitioned to the FV1600 regulations. New facilities and increased staffing levels enabled BRD to commence development of their second generation Vee, the Sabre 02, designed specifically for the FV1600 rules. The prototype was designed and built during 2008, before a thorough track testing program in 2009. With the car achieving lap record pace in testing, it was deemed production ready and the first orders were taken in late 2009.

The new Sabre took Formula Vee to the next level. The Sabre 02 shared many common components with the 2010 Spectrum 012 Formula Ford, including main body panels. The Sabre 02 also shared the Spectrum's debut success. In its first outing, Daniel Reinhardt drove the Junior Racing Developments team Sabre 02 to pole position, four from four race wins and a new lap record at Sandown International Raceway.

As with the Spectrum Formula Ford, the Sabre Formula Vee is built with components that include:

Borland is the nephew of Brian Shead of Cheetah Racing Cars.