Skip to content
This article is about motor racing regulations. For other uses, see Group A (disambiguation). 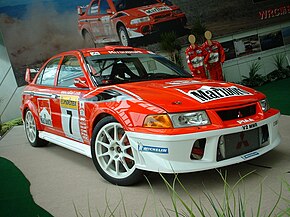 Group A was a set of motorsport regulations introduced by FIA covering production-derived vehicles intended for outright competition in touring car racing and rallying. In contrast to the short-lived Group B and Group C, the Group A referred to production-derived vehicles limited in terms of power, weight, allowed technology and overall cost. Group A was aimed at ensuring numerous privately owned entries in races.

Group A was introduced by the FIA in 1982 to replace the outgoing Group 2 as "modified touring cars", while Group N would replace Group 1 as "standard touring cars". The FIA continued to promulgate regulations for Group A Touring Cars until at least 1993,[1] and the category survived in domestic championships until 1994. However, Group A is still used as the basis for most rally competitions around the world.

To qualify for approval, a minimum of 2500 cars of the competing model had to be built in one year, out of 25,000 for the entire range of the model (e.g.: 2500 Subaru Impreza WRX, out of 25,000 Subaru Impreza). Up to 1991, the requirement was a minimum of 5000 cars in one year, without regard to the entire range, but the FIA allowed "Evolution" models to be homologated with a minimum of 500 cars (e.g.: BMW M3 Sport Evo, Mercedes-Benz W201 Evo, Nissan Skyline GT-R NISMO). Rules also required some of the interior panels to be retained, e.g. interior door panels and dashboard.

However, not all manufacturers who built 500 such models sold them all, some stripped the majority of them to rebuild them as stock models or used them to allow teams to use modified parts. One such example of this was Volvo with the 240 Turbo in 1985. After they had produced 500 such models, Volvo stripped 477 cars of their competition equipment and sold them as standard 240 turbo roadcars. As a result, after FISA's failed attempt at finding an "Evolution" car in any European countries, Volvo were forced to reveal the names of all 500 "evo" owners to be permitted to compete.[2] The other example was Ford, after selling off their entire RS500 stocks, they read the rulebooks and found themselves that rather than using either the Sierra Cosworths or the RS500s, they could use the body of the basic 3-door Sierra, which Ford was discontinuing, and use their Evolution equipment on them. Nowadays, these cars are treated as any other model in the range.

Australian manufacturer Holden also failed to build the required 500 cars for their VN Commodore SS Group A SV in 1991 (though they had no problems producing 5,000 base model VN Commodores). There were in fact only 302 of the Group A SV's built. However, since Group A as a category was to be replaced from 1993 in Australia, and to give Holden's latest flagship model a presence in Australian touring car racing (the previous model VL Commodore SS Group A SV which had been designed by TWR had been racing since 1988, though it was actually released after Holden had already launched the VN model), the Confederation of Australian Motor Sport (CAMS) fully homologated the VN Commodore for racing.

For touring car competition, vehicles such as the BMW 635 CSi and M3, Jaguar XJS, various turbo Ford Sierras the V8 Ford Mustang, the turbo Volvo 240T, Rover Vitesse, various V8 Holden Commodores, various turbo Nissan Skylines, including the 4WD, twin turbo GT-R, Mitsubishi Starion Turbo, Alfa Romeo 75 (turbo) and GTV6, various Toyota Corollas and the Toyota Supra Turbo A were homologated. In the European Touring Car Championship, Group A consisted of three divisions, Division 3 – for cars over 2500cc, Division 2 – for car engine sizes of 1600–2500cc, Division 1 for cars that are less than 1600cc. These cars competed in standard bodykits, with the production-derived nature required manufactures to release faster vehicles for the roads in order to be competitive on the track. Tyre width was dependent on the car's engine size.

The FIA continued to promulgate regulations for Group A touring cars until at least 1993,[1] however Group A survived in touring car racing in domestic championships until 1993. The German Deutsche Tourenwagen Meisterschaft (DTM) switched to a 2.5L Class 1 formula in 1993, while in Japan in 1994 the Japanese Touring Car Championship organisers followed suit and switched classes like most other countries who had adopted the British Touring Car Championship-derived Supertouring regulations. Many of the redundant Skylines found a new home in the form of the JGTC (Japanese GT Championship) with modified aerodynamic devices, showing its competitiveness whilst being up against Group C, former race modified roadcars and specially developed racers, like the Toyota Supras during the earlier years.

The Confederation of Australian Motor Sport had originally announced in mid-1983 that Australia would adopt Group A from 1 January 1985 to replace the locally developed Group C rules that had been in place since 1973 (Group A in Australia actually started in mid-late 1984, but would not become uniform until 1985). From 1993, CAMS replaced Group A with a new formula for Australian Touring Car racing which was originally known as Group 3A. This was initially open to five litre V8 powered cars and two litre cars (later to become known as V8 Supercars and Super Touring Cars respectively).

Hillclimb races still use Group A as a touring car class across Europe, while in Australia Group A is now a historic class, though only actual cars raced from 1985 to 1992 (complete with log books) are allowed to compete.

In order to be homologated, manufacturers were required to produce 5,000 units worldwide, and then in 1993 this number was reduced to 2,500. The cars are further modified for greater power and torque, and fitted with suspension and tyres specifically suited to the conditions of the specific rally, which may take place entirely on asphalt roads, different consistencies of gravel and dirt roads and even snow/ice-covered roads on some rallies held in northern Europe.

By 1990, Group A cars exceeded the performance of the Group B cars on many events, because although they had far less power they had better handling and traction. They were also much safer.

Group A is still used as the basis for most rally competitions around the world, but the most competitive cars are limited-production prototypes, known as kit cars (which competed in the FIA 2-Litre World Rally Cup), World Rally Cars, Super 1600 and Super 2000.

The last WRC car to use the old Group A homologation requirement was the Mitsubishi Lancer Evolution VI.

Series that used the Group A formula