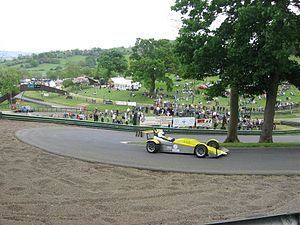 It is one of the oldest forms of motorsport, since the first known hillclimb at La Turbie near Nice, France took place as long ago as 31 January 1897. The hillclimb held at Shelsley Walsh, in Worcestershire, England is the world's oldest continuously staged motorsport event still staged on its original course, having been first run in 1905.[1]

An alternative style of hillclimbing is done with offroad motorcycles going straight up extremely steep hills, with the victor being the motorcycle which can climb the highest, or make it to the top the fastest. The motorsport has a long tradition in the U.S. and has been popular in France and Austria since the 1980s. The Austrian event in Rachau focused on crowd entertainment, and inspired many similar events.[citation needed]

Hillclimbs in continental Europe are usually held on courses which are several kilometres long, taking advantage of the available hills and mountains including the Alps. The most prestigious competition is the FIA European Hill Climb Championship.

An Austrian venue: Gaisberg. An historic course is at Semmering.

In the British Isles, the format is different from that in other parts of Europe, with courses being much shorter. The Harewood Hillclimb is mainland Great Britain's longest permanent hillclimb at 1,584 yards (1,448 metres). The longest in the UK and Ireland is Cairncastle, County Antrim, Northern Ireland at 1.65 miles. These short courses are more akin to uphill sprints – and almost always take under one minute for the fastest drivers to complete. For this reason, cars and drivers do not generally cross between the British and continental European championships.

Hillclimbing is also relevant to motorcycle sport; the governing body is the National Hill Climb Association.[2][3]

Three German venues: Freiburg-Schauinsland, Rossfeld (near Berchtesgaden), Osnabrück. The fourth International Schauinsland hillclimb at Freiburg was held on August 5, 1928: "A car made the fastest time of the day, Heusser's Bugatti putting up 74.009 km/h, the fastest motorcycle being Stegmann's DKW at 69.6 km/h." Caracciola (Mercedes) won the over two-litre racing car class.[4]

Hillclimbing is a very popular sport on the island of Malta. Numerous events are organised annually by the Island Car Club. Participants are divided according to their type of vehicle into various categories ranging from single seaters to saloon cars. 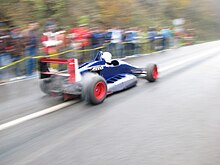 In Romania, the first major event was the Feleac course, in Cluj. From 1930, it was a round in the European Hill Climb Championship. A record of the Feleac was set by famous German racer Hans Stuck in 1938, driving a 600 bhp (450 kW) Auto Union Grand Prix car. Stuck stormed through the 7 km (4.3 mi) gravel course in 2 min 56 sec.[citation needed] In recent decades, the course was widened in order to be suitable for intense traffic and therefore is considered inappropriate for auto racing.[citation needed]

There are several traditional hillclimbing race events in Portugal, and its national championship growing in popularity since 2010. Falperra International Hill Climb is the most popular and famous hillclimb, being held since 1927, most of the editions as part of the European Championship.[5]

There are several traditional hillclimbing race events in Slovakia. Some of the best known and most popular include the Pezinská Baba hillclimb race and the Dobšinský Kopec hillclimb race.[6][7][8]

One of the most well known Slovak drivers competing in local and international hillclimb events is Jozef Béreš. Béreš is also very popular on social media networks thanks to the videos of him driving his legendary Audi Quattro S1 racecar. [1]

Motor racing was banned in Switzerland in the aftermath of the fatal collision between cars at the 24 Hours of Le Mans race in 1955. However, this prohibition does not extend to events where drivers compete only indirectly via the clock. Events such as rallies, hillclimbs and slaloms are very popular, including the FIA European Hill Climb Championship.

Canada's best known hillclimb event is the Knox Mountain Hillclimb, held in Kelowna, British Columbia. It is a 3.5 km (2.2 mi) paved road, climbing 245 m (804 ft). It has run annually since the 1950s, attracting drivers from the Pacific Northwest.[10]

Since that time, hillclimbs had not been held in Mexico.[citation needed]until in September 30. 2017, Pedro Vargas, organized the first ever Hill Climb on tarmac in the Mexican state of Baja California. The temporary course was set on the road to the National Astronomical Observatory situated on the San Pedro Mártir mountain range, on a stretch from KM marker 50, to KM marker 80, making it the allegedly "The longest Hill Climb in the World". It has been held the following years of 2018 and 2019, and, is scheduled to be run for the 4th. time on October 2 and 3 of 2020. The overall ascent record was set by the late Carlin Dunne at 14'-58" piloting a Honda CRF 450 c.c. supermoto. 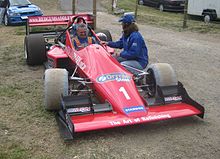 An Australian Hillclimb Championship was first staged in 1938 and has been contested annually since 1947.

Hillclimbing in Australia dates back to the early 1900s, and was most prevalent in the city of Melbourne, at locations such as Templestowe, Heidelberg and Rob Roy.

The course at Templestowe still exists today in the Domain Wetlands. The course was never trafficable due to the massive incline known as "the wall", with an incline ratio of 1:2.5 is thought to be the steepest bitumen surface in Australia,[11] and so was only used during race events. Burgundy Street in Heidelberg was used for early Hillclimbs.

The course at Rob Roy hosts race meets regularly, including rounds of the Victorian Hillclimb Championships. It is located just off Clintons Road, Christmas Hills in an area of Smiths Gully known as Rob Roy.

Mount Tarrengower, near Maldon in Central Victoria, has an annual Hillclimb hosted by the Victorian Vintage Sports Car Club, Bendigo Light Car Club and the Historic Motorcycle Racing Association of Victoria. The event is held on the 3rd weekend of October. It is now a "classics" only event, after a serious accident in the 1970s. Vintage motorcycles are now a feature of this event. Current champion is 2 time winner and only female competitor to take the title in the history of the climb, Stacey Heaney on a 1971 Yamaha XS650.

The MG Car Club of Queensland Inc. (est. 1954) built the Mount Cotton Hillclimb circuit and continues with its current management and operation. The first event held at this facility was on Sunday 18 February 1968. The dedicated 946 metres of tarmac circuit hosts the annual Queensland Hillclimb Championships, the Club's annual six round Hillclimb series and inter-club competitions. The Australian Hillclimb Championships have been held there on at least 9 occasions.

Australia's longest hillclimb course is the Poatina Hillclimb, a temporary closed road course that features an elevation gain of 580 m (1,900 ft) in 10.6 km (6.6 mi), climbing Mount Blackwood from the Norfolk Plains to the Central Plateau of Northern Tasmania. The inaugural event, conducted in February 2014, covered 7.2 km (4.5 mi); the second running, in 2015, saw the course extended.

South Australia features the historic permanent venue Collingrove,[12] as well as annual temporary venues including Mount Alma Mile, Willunga, Legend Of The Lakes and the state's longest course is the Eden Valley Hillclimb at 3.7 km (2.3 mi).

Hillclimbing is a popular club event in New Zealand, although a number of international competitors and foreign motor racing enthusiasts attend the premiere hillclimb event on the New Zealand motor racing calendar.

The driver with the greatest number of "Race to the Sky" outright wins (8) is Nobuhiro "Monster" Tajima, driving his custom built Suzuki Escudo hillclimb special vehicle.

The best-known hillclimb event in South Africa is held annually in early May during the Knysna Speed Festival, currently known as The Jaguar Simola Hillclimb.[13] It is a three-day event, with Classic Car Friday reserved for cars built prior to 1980 and restricted to 60 entries. The King of the Hill Challenge (limited to 84 entries), for unrestricted cars in various classes, takes place over the weekend. The Saturday is for practice and pre-qualifying, while Sunday features the "hot" cars taking on final qualifying and the final runs. The course length is 1.9 km (1.2 mi) up Simola Hill. It is very fast with the 2016 winning average speed being 176.991 km/h (109.977 mph).[citation needed]. 2018 will be the ninth running of the event which was founded in 2009. There was no event in 2013.

The Kiamburing TT is an annual hillclimb event in Kenya. It is the first of its kind in East Africa[14] and inspired by other international hillclimb events. It is a time attack event run on a closed course.

The event held in Kiambu County in October 20, 2013 brought together over 15 high performance cars to compete in a timed race on the 18-kilometre (11 mi) Kiambu-Ndumberi road.