Skip to content
Not to be confused with Opel Astra or Vauxhall Astra.
Motor vehicle

The Holden Astra is a small car formerly marketed by Holden. The first couple of generations of Astra were made only for Australia, and was a derivative of the locally produced Nissan Pulsar. With the Button car plan coming into effect, it was replaced by the Holden Nova, a rebadged Toyota Corolla.[3]

In 1995, Holden commenced selling the TR Astra in New Zealand. The TR was a badge engineered version of the Opel Astra, which had been sold locally as an Opel since 1993. Holden discontinued the Nova line in Australia in favour of Opel's TR. Following its implementation as an Opel, it quickly became successful in its TS (1998) generation, where it came close to becoming Australia's best selling small car. The AH (2004) continued its success, before Holden discontinued Opel-sourced product range, replacing Astra with GM Daewoo's Cruze.

The original Holden Astra, introduced in August 1984 as the LB series was a badge engineered Nissan Pulsar (N12). The Pulsar, a Japanese designed model, sold alongside the unique to Australia Astra line-up. The Pulsar for Australia was assembled in Clayton, Victoria; however, for the Astra the body panels were pressed at Holden's Elizabeth, South Australia facility. Unlike its Nissan counterpart, the Astra was only offered as a five-door hatchback, with the three-door hatchback and four-door sedan body styles omitted from the range due to fears they would overlap with Nissan's own Pulsar range. However, Holden's continuation of the Gemini sedan range was the nearest equivalent of this in the range.

The only engine available was a Nissan-designed 1.5-litre engine, locally manufactured, this engine produced 52 kilowatts (70 hp) and 115 newton-metres (85 ft⋅lbf) of torque. Transmission options were a five-speed manual or a three-speed automatic.

Compared to the N12 Pulsar, the Astra LB sported a distinctive grille, the work of Australian stylist Paul Beranger housing the Holden lion insignia in the centre. Also unique were Astra-only tail lamps, badging and decals.

A revised LC model was released in April 1986.[6] Unleaded-fuel requirements uprated the engine displacement to 1.6 litres, power to 60 kilowatts (80 hp) and torque to 124 newton-metres (91 ft⋅lbf). Model and trim changes were also a part of the update, including a new grille insert, and the addition of an SL model positioned below the SL/X and SL/E levels.[7]

The Used Car Safety Ratings, published in 2008 by Monash University, found that first generation Astras (LB/LC) provide a "significantly worse than average" level of occupant safety protection in the event of an accident.[8]

Two trim levels, the SL/X and the SL/E were offered in the LB Astra series, although a basic SL model arrived in 1986 with the LC upgrade.

For the second generation LD Astra, the Nissan Pulsar was again used as the basis, this time using the latest N13 series. Unlike before, the LD was the result of a proper joint venture development programme. That is, Nissan provided the bodywork and Holden supplied powertrains for fitment in both applications.

Launched concurrently in July 1987, both the LD Astra and N13 Pulsar were offered in four-door sedan and five-door hatchback body styles. Outside of Australia though, three-door hatchback and station wagon body variants of the Nissan were also available.

In July 1989, all associations with Nissan were severed and a new agreement between Toyota was formed. This relationship, known as the United Australian Automobile Industries (UAAI) was a continuation of the Australian Government's Button Plan that started with Nissan. Nissan continued to use the Holden engines until 1991 before replacing their N13 Pulsar line with the N14, while at the same time entering a new model sharing alliance with Ford.

The Used Car Safety Ratings evaluation from 2008 found that LD series Astras provide a "worse than average" level of occupant protection in the event of an accident.[8]

Of the three trim specifications offered, the SLX and SLE nameplates no longer featured the "/" symbol, as in SL/X.[9] Besides this anomaly, the LD range mirrored that of the LC Astra:

In September 1988, Holden Special Vehicles (HSV) launched the HSV Astra SV1800, which was a tuned version of the LD Astra. Most of the 65 or so examples employed the sedan body style. Upgrades from the standard Astra were limited to cosmetic and suspension changes, with both "Stage 1" and "Stage 2" suspension setups offered.[10]

In 1995, the Holden Astra name was used again, this time in New Zealand for a model based on the Opel Astra F, Opel being the General Motors subsidiary in Germany. Imported from Vauxhall's Ellesmere Port plant in the UK, this third-generation Astra model and was sold as a four-door sedan, five-door hatchback and five-door wagon.

Holden in Australia did not sell the Opel-based Astra, known as the TR series, until September 1996,[11] after the dissolution of Australian Government Button car plan. This resulted in the collapse of UAAI, the Holden-Toyota alliance, and as result Holden opted to return to marketing rebadged General Motors vehicles. Between 1989 and 1996, the Astra's role was fulfilled by the Nova, Holden's version of Toyota's Corolla (E90 and E100). Unlike New Zealand, the wagon was not offered.

During this period of badge engineering in Australia, General Motors New Zealand had used Opel as one of its main marques alongside Holden and Isuzu. Because the Button plan or local equivalent never existed in New Zealand, the two initial generations of Holden Astra (LB/LC and LD) were thus never available in that market. 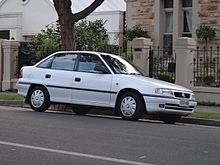 Like the two previous generations, TR Astras were assessed in the 2008 Used Car Safety Ratings, and shown to provide an "average" level of protection.[8] 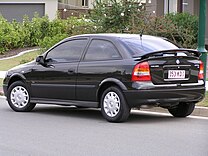 In September 1998, the Astra was replaced again with a German Opel-engineered, Belgium-built version.[12] Known as the TS Astra, it was equipped with either a 90-kilowatt (120 hp) 1.8- or a 2.2-litre petrol engine and was offered in City, CD, CDX, SXi and SRi specifications. The SRi was three-door hatchback only, and the standard Astra was only available with a 1.8-litre 16-valve engine. Models with a 5-stud wheel pattern have the ABS option factory-installed. The Astra CD gained 15-inch alloy wheels as standard equipment in circa 1999, replacing the steel wheels with hubcaps previously standard.

The TS Astra model change followed that of the Opel Astra G range, including the sedan, hatchback and convertible. However, the coupé by Bertone was not offered with a Holden badge. The drivetrain was identical to other cars in the Astra lineup, and as such, was not a bona-fide sports car. Like the Astra F, the Astra G was available as a wagon in New Zealand, but not Australia. In 2003, a 147-kilowatt (197 hp) 2.0-litre turbo engine became available. The standard Astra was only available with a 1.8-litre 16-valve engine, and lived on until 2005 as the Holden Astra Classic, alongside the new model. The philosophy behind this was for Holden to remain competitive in the market until the cheaper Viva model was introduced.

In accordance to the Monash University's 2008 update to the Used Car Safety Ratings, TS Astra models were rated "better than average" in the field of crash safety protection.[8]

The fifth generation AH Astra, based on the Delta I platform Opel Astra H was launched in November 2004[14] as a five-door hatchback only, manufactured in Belgium, selling alongside a Polish-built Astra TS sedan and hatchback. The sedan and hatchback TS Astra models carried an "Astra Classic" badge, but were finally dropped in late 2005, replaced by the Holden Viva, a rebadged Daewoo Lacetti. Between 2003 and 2004, the Holden Viva was marketed in Australia as a Daewoo Lacetti before Holden withdrew the brand from Australia due to unsustainably poor sales amid quality & reliability issues.

Like the previous generation, the AH series was found to provide an "average" level of safety according to the 2008 Used Car Safety Ratings.[8] At launch, AH Astras came with front- and side-impact airbags as standard inclusions, allowing the Astra to receive a three-star ANCAP crash safety rating.

Holden suspended importation of the AH Astra on 20 April 2009, citing currency fluctuations, perceived poor resale value and build quality problems.[15] Holden's import cessation, which resulted in no Astras arriving during June and July 2009, coincided with the introduction of the Holden Cruze, reported to be the direct replacement for the Holden Astra.[16] On 31 August 2009, Holden confirmed that the cessation of Astra imports would become permanent, with no intention of further imports of either the then current AH series or the next generation car. Holden stated their small car efforts would now be focused on the new Cruze, instead of the unsuccessful Astra.[17] 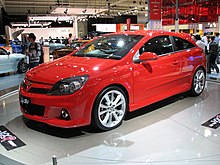 The sixth generation Astra is based on General Motors' Delta II platform and went on sale in 2015. The same car was part of a failed attempt by Opel to establish itself in Australia between 2012 and 2013.[19]

The range included the Astra GTC, GTC Sport and VXR three-door hatchbacks, sold at significant lower prices than the preceding Opel models.[20] The VXR featured a turbocharged 2.0 L direct injection engine with a power of 206 kW (280 PS; 276 hp) and torque of 400 N⋅m (300 lb⋅ft).

Holden announced in early 2015 that the fifth-generation Opel Astra will be sold in Australia,[21] from 2016[22] with the Holden Cruze's future uncertain. In late 2015, Holden announced that the Astra and second-generation Cruze will be sold alongside each other.[23] In January 2017 it was revealed that both the Astra and Cruze would be sold together under the Astra nameplate, with Holden taking only the hatch variant of the Opel Astra as the "new Astra hatch," and the second-generation Cruze sedan imported as the "new Astra sedan." The Chevrolet Cruze hatch would not be imported by Holden, while the Opel Astra sedan was discontinued starting from the Astra K generation.[24]

The new BK Astra hatch went on sale in December 2016 with three models forming the lineup: R, RS and RS-V. Holden had later added an R+ grade which includes the autonomous safety pack. Only a six-speed manual was available from launch on the 1.6-litre turbo models, with the automatic becoming available in March 2017. A wagon variant of the Astra hatch launched in October 2017, available in LS+ and LT trims, with an exclusive 1.4-litre turbo engine mated to a six-speed automatic transmission. Unlike the Astra hatch and sedan which are produced in Poland and South Korea respectively, the Astra Wagon is produced at Vauxhall's Ellesmere Port manufacturing facility in the UK.

In 2017, Holden released a station wagon to complement the BK Astra hatchback. It was based on the Vauxhall Astra sportwagon sold in the United Kingdom.[25]

On 10 December 2019, Holden announced it would be discontinuing the Astra, (and Commodore), nameplates. They cited a lack of sales drive in each of the respective categories, turning instead to develop their SUV and Ute range.[26]

Sales of the BK Astra commenced in November 2016. Initially slow with manual transmission being the only option, sales have picked up with the introduction of an automatic transmission, as well as sedan and wagon variants, in 2017. As of June 2018, Holden announced that the best-selling Astra Sedan variant would be removed from sale due to ongoing supply issues from the GM Korea plant, and discontinue the Astra Wagon variant due to slow sales. Both variants will still appear on their website until stock is exhausted.