The Holden HX is a range of automobiles which was produced by Holden in Australia from 1976 to 1977.

The HX series was released in July 1976 [1] and featured a range of models developed from those in the superseded Holden HJ range, which had been in production since 1974. The HX models featured only minor updates to the exterior, notably the grille and badgework.[1] However significant changes were made to the engines to meet new Australian emissions regulations.[2] During the course of the HX series, front bucket seats were adopted as standard equipment for Kingswood-badged vehicles.

The Premier models were differentiated from the cheaper variants by a four headlight frontal treatment.[3] Wagons rode on a wheelbase which was 76.2 mm (three inches) longer than that of the sedans.

Two special-build HX Kingswood variants emerged later in production. A Kingswood Silver Anniversary model was released in November 1976 to celebrate 50 years of General Motors in Australia and a Kingswood Deluxe sedan and wagon was also introduced during the HX model life in September 1977 with a 4.2 litre V8 as standard.

For the HX series the performance oriented Monaro range was reduced to one model only, the Monaro GTS Sedan. The Monaro LS & GTS coupes were not carried in from the HJ series however a Holden Limited Edition coupe was released in September 1976.[4] This utilised the Monaro coupe body but not the Monaro name.

The base models were marketed simply as the Holden Ute and Holden Van and both retained the HJ style grille. The Kingswood Van was an addition to the commercial vehicle range [1] and the One Tonner was a chassis cab vehicle which featured its own unique frontal treatment, carried over from its HJ predecessor.

The Sandman Ute and Van were equipped with various features from the Monaro GTS and featured side stripes and a large 'Sandman' logo on the tailgate.

A 3.3-litre inline six-cylinder engine was available, as were 4.2-litre and 5.0-litre V8s. All were modified low-emission units to comply with the new ADR27A regulations, and were notably less powerful than their predecessors.[2] The 2.8-litre inline six available in the HJ series had been deleted, and the Monaro GTS and Holden Limited Edition models were only offered with the eight-cylinder engines. 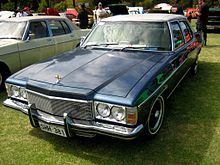 The Statesman HX range of long-wheelbase luxury sedans developed from the Holden HX series was also released in July 1976. Like their HJ predecessors, the two models in the Statesman HX range, the de Ville and the Caprice, were marketed as Statesmans rather than as Holdens.