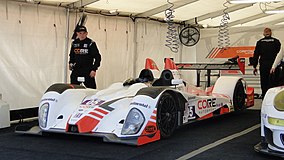 The Le Mans Prototype Challenge (shortened to LMP Challenge or LMPC) was a spec sports prototype formula created by the Automobile Club de l'Ouest (ACO), organisers of the 24 Hours of Le Mans, and sports car constructor Oreca. The formula is intended as part of a ladder system for young and upcoming drivers into the world of endurance racing while also serving as a value engineered entry for drivers and teams into Le Mans Prototypes due to limitations on manufacturers and suppliers.[1]

Initially launched as an independent racing series known as the Formula Le Mans Cup in 2009, the formula has since been expanded to allow participation in three separate series for 2010. The American Le Mans Series used the title Le Mans Prototype Challenge since its inception.[2] The Le Mans Series used the name Formula Le Mans until 2011. All ACO series adopted the name Le Mans Prototype Challenge in 2012.[3]

The Formula Le Mans car is built by French manufacturer Oreca and known as the FLM09. The chassis is based on Courage's LC75 LMP2 chassis, while the car's carbon fiber and kevlar bodywork is a simplified version of the LC75's design. All FLM09s use a production-based General Motors small block LS3 V8 which produces approximately 430 horsepower (440 PS). Transmissions are supplied by Xtrac and feature a six-speed sequential transmission operated by paddle shifters. Engine management is regulated by Magneti Marelli. Up to 2012, all FLM09 cars ran on Michelin slick tires based on their LMP tires but in March 2013, it was announced that Continental AG would be the tire supplier for the LMP Challenge class in the upcoming American Le Mans Series season owing to Continental's deal with NASCAR as sole tire supplier for their sportscar arm. Reinforced carbon-carbon disc brakes are supplied by Brembo.

In order to accommodate endurance races in 2010, Oreca also offers an endurance upgrade for the FLM09 which adds an air restrictor to the engine to increase reliability as well as slowing the car in comparison to LMP2 category cars.

When the Formula Le Mans category was introduced in 2009, it was initially a support series for many races in the Le Mans Series in Europe as well as at the 24 Hours of Le Mans. The ten race Formula Le Mans Cup organized by the ACO and Oreca included over a dozen entries and was dominated by the DAMS driving pair of Gavin Cronje and Nico Verdonck, the latter of which won the inaugural Drivers Championship. Most races were one hour in length with a mandatory pit stop to allow teams to change drivers, while a season finale at Circuit de Nevers Magny-Cours was held for three hours.

As a further development of the Formula Le Mans Cup, Oreca launched the in late 2009 in order to allow further amateur driver development during the Le Mans Series off-season. The series, which is held exclusively at the Circuit Paul Ricard, France, combines Formula Le Mans cars with competitors from the GT2 and GT3 grand tourer categories. The three race season includes two races of thirty minutes and one race of an hour in length.[5]

IMSA decided to drop the Prototype Challenge class from the championship at the end of 2017, thus retiring the class altogether.[7]