The Mallala Race Circuit, as it was originally known,[2] was established on the site of the former RAAF Base Mallala. The land was purchased from the Royal Australian Air Force at public auction in 1961 by a group of enthusiasts seeking to create a replacement for the Port Wakefield Circuit.[3] South Australia had been allocated the 1961 Australian Grand Prix on the state by state rotational system that applied at that time, but the organisers had subsequently been informed by the Confederation of Australian Motor Sport (CAMS) that the 2.092 km (1.3 mi) Port Wakefield venue, which had hosted the 1955 Australian Grand Prix, was no longer suitable to host the event.[4]

The opening meeting for the new venue was held on 19 August 1961 with Bib Stillwell winning the main event in a Cooper Climax.[1] The 1961 Australian Grand Prix headlined the circuits second meeting with Lex Davison winning his fourth and last AGP driving a Cooper T51 Coventry Climax FPF.[5] The original lap distance of 3.38 km (2.1 mi) was reduced to 2.601 km (1.616 mi) in late 1964[5] when Bosch Curve was moved closer to the Dunlop Curve Grandstand,[6] thus removing the north eastern leg of the circuit.[7] 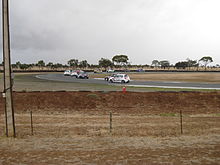 The Northern Hairpin at Mallala Motors Sport Park in 2013 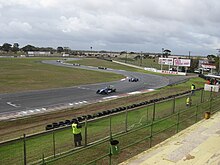 Following the passing of owner Clem Smith in February 2017 the Peregrine Corporation, owners of the upcoming The Bend Motorsport Park, purchased the complex and took over the operations in May the same year.[12]