The Nissan Primera is a large family car which was produced by the Japanese automaker Nissan from 1990 to 2007, for the markets in Japan and Europe. In Japan, it replaced the Auster/Stanza, and was exclusive to Nissan Prince Store locations. In North America, it was the entry level luxury sports sedan for the Infiniti brand. The word "primera" in Spanish means "first", in its female form.

Since 1986, Nissan had been building Bluebirds — essentially a rebadged home market Auster/Stanza – for the market in European at its factory in Washington, Tyne and Wear, England. Nissan showcased the Primera X concept car at the 1989 Tokyo Motor Show as part of Project 901 (Nissan's performance vision for 1990), and concept car UV.X at the 1989 International Motor Show Germany.

Having originally launched in Japan in February 1990, Nissan replaced the United Kingdom's Bluebird with the slightly smaller Primera in September that year. It had a conventional front wheel drive chassis and five speed manual gearbox, with some versions getting the option of a four speed automatic.

The 1.8 litre version was not built with left-hand drive and was not sold in the rest of Europe. Bodystyles were four- and five-door saloons. A five-door estate was also offered as the Primera Traveller; however, it was based on the slightly different sheet metal of the Nissan Avenir and was only made in Japan. With exception of the UK GT, only the four-door model was available in Japan.

Nissan had targeted the car at the market in Europe. The Primera saw Nissan's multi link front suspension applied to front wheel drive for the first time. The 2.0 litre gasoline engine received a power upgrade in 1992, which gave the then ZXe (later renamed the eGT) 150 bhp from the standard 2.0 litre engine and a top speed of around 219 km/h (137 mph).

Some five door British, RHD Primeras were exported back to Japan (under the name of Primera UK GT), Russia and Ireland. In the United States, cars built in Japan was rebadged as the Infiniti G20, part of Nissan's upper scale Infiniti brand. The G20 was based on the Japanese model Primera, which featured a narrower body to remain within the Japanese compact class tax bracket with width limit at 1,700 mm (66.9 in); the Japanese-spec UK GTs also feature the narrower body to comply with the tax bracket.

The L cars were basic, and had 1.6 litre petrol engines only. The LX was slightly plusher, but 2.0 litre petrol and diesel versions were also available. SLX was the mid range model, and these also had a choice of 1.6 and 2.0 petrol, or 2.0 diesel engines. The SGX trim level was the luxury specification version; powered by the 2.0 litre 115 PS (85 kW; 113 hp) engine.

From 1994, the range received another facelift, and the trim levels were almost the same; although Equation replaced the basic L as the entry level trim; like its predecessor, it had a 1.6 petrol engine, but there was no diesel option. A rare AWD option was available, known as a T4, with 150 PS (110 kW; 148 hp). At this time, the SE replaced the SGX.

A new "hot hatch" version, the SRi joined the line up from 1994, and this had a choice of 1.6 or 2.0 litre petrol engines. There was also a very rare version of the P10 built and tuned by Japanese tuning company Autech: these models came with special Autech suspension and interior packages and a tuned SR20DE 2.0 litre engine, making 180 PS (132 kW).

The second generation Nissan Primera was launched in the end of 1995 in Japan, and in the autumn of 1996 in Europe. Unique in its class, new Primera featured multi link beam rear suspension with multi-link front suspension.

Nissan Primera UK GT. The UK GT was the Sunderland built Primera hatchback exported to Japan as a captive import.

As before, in Europe the Primera was sold with 1.6 L and 2.0 L petrol engines and a 2.0 L diesel, with hatchback, saloon and estate bodystyles. While the estate was now based on the Primera's platform, it was assigned a model code of WP11.

In Japan, the Primera was initially offered with the SR18DE, SR20DE and SR20VE engines, and initially only as a sedan; these models (including the British-built UK GT models for sale in Japan) were slightly narrower at 1,695 mm (66.7 in) to remain within the Japanese compact class tax bracket, and was Nissan's car for the Supertouring era of Japanese Touring Car Championship, although it failed to recapture the title or Skyline GT-R's dominant glory of the Group A era.

Alongside the original Primera, the Nissan Primera Camino was launched as a badge engineered model for different dealer networks.

The models for Japan also introduced a CVT automatic transmission during the P11 series, including a six-speed tiptronic version in the M6 G-V and Autech edition wagons and Te-V saloon. The Te-V was equipped with SR20VE and CVT M6 transmissions only.

Nissan continued selling the Primera in the United States as the Infiniti G20 from 1998 until 2002, when it was replaced by a rebadged version of the Nissan Skyline V35 as the Infiniti G35. The G20 used the same grille and rear lamp alterations from the Primera Camino. 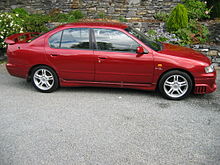 In 1998, Nissan New Zealand released a limited edition Primera SMX with association with Steve Millen (Stillen Sports Parts). Features include cross drilled brakes, Eibach springs and a more aggressive body kit. There were a total of 26 (including the prototype numbered 000) made in five colour choices (the prototype was the only white one made).

This was because until 1998 (due to lifting of import tariffs on cars) Nissan had an automotive assembly operation in New Zealand, and for a short time between 1997 and 1998 the P11 Primera was assembled in Wiri, Auckland.

The Primera won the British Touring Car Championship manufacturer's and team titles thanks to RML in 1998 and 1999 with backing from the factory, as well as the Independents' Cup in 1999 and 2000.

In August 1999, Nissan gave the Primera a facelift, giving it a more modern front end with clear style headlamps featuring projector units, instead of the traditional Fresnel lens type. Nissan also introduced their "corporate identity" front, with the "flying wing" grille. The new code name for this model was "P11-144".

Along with the exterior changes, improved specification levels were present; with the entry level models such as the "S" featuring automatic climate control, driver, passenger, and side airbags. Further up the model range, other features were seen such as xenon headlamps.

A new "lean burn" 1.8 L petrol engine, the QG18DE was added to the range. This facelift was not generally applied outside Europe and was not available in Japan when Nissan "formalized" the fronts of other Primeras and Caminos instead, bringing them into line with the look of the American model of Infiniti. Production ended in June 2002.

The Primera STCC Edition (named for the Swedish Touring Car Championship) is a limited production model based on the Primera Sport. One hundred examples were made. It had the same engine as the Primera Sport, but it was lowered 25 mm (1.0 in), had headlight "goggles" and had a bigger wing.[1]

Nissan introduced the third generation Nissan Primera on January 30, 2001, its first all new car since the alliance with Renault was formed two years earlier. The new Primera was more radically styled than previous versions. No Infiniti equivalent was released; the Skyline-based Infiniti G35 replaced the G20 in the United States.

New Zealand Primeras were introduced in 2002, and were all equipped with continuously variable transmissions; there was no manual option. Originally, Japanese-built sedans and wagons were available in New Zealand. This remained true until 2006, when liftbacks and estates assembled in the United Kingdom became available instead. The CVT is also available in the European 2.0 L and the Japanese-made 2.0 and 2.5 L versions (the larger engine was not available in Europe).

Falling sales caused the Primera to be withdrawn from sale in the United Kingdom in November 2006. LHD production, however, kept up until 2007. In Japan, production of RHD Primeras also continued until 2007. In 2011, a large number of brand new Primeras appeared in the market in Ireland, after apparently having been in storage since 2006.[citation needed]

Speculation in the motoring press suggested that a "tweaked" version of the Nissan Altima would be the replacement, but this did not happen. In August 2006, Auto Express reported pictures of a disguised, Sentra-based prototype testing in Germany.

However, it was actually the new Nissan Sentra, which was built in Spain rather than at Sunderland for European buyers. Such was the success of the Nissan Qashqai crossover in Europe, that Nissan did not launch a direct replacement for the Primera, despite earlier plans for such a model to be developed for at least some markets in Europe.[2]