Orange is a city in the Central Tablelands region of New South Wales, Australia. It is 254 km (158 mi) west of the state capital, Sydney [206 km (128 mi) on a great circle],[3] at an altitude of 862 metres (2,828 ft). Orange had an estimated urban population of 40,493[1] as of June 2018 making the city a significant regional centre. A significant nearby landmark is Mount Canobolas with a peak elevation of 1,395 m (4,577 ft) AHD  and commanding views of the district. Orange is situated within the traditional lands of the Wiradjuri Nation.

Orange is the birthplace of poets Banjo Paterson and Kenneth Slessor, although Paterson lived in Orange for only a short time as an infant. Walter W. Stone, book publisher (Wentworth Books) and passionate supporter of Australian literature, was also born in Orange. The first Australian Touring Car Championship, known today as V8 Supercar Championship Series, was held at the Gnoo Blas Motor Racing Circuit in 1960.[4] 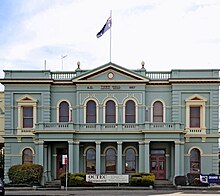 In 1822 Captain Percy Simpson marched into the Wellington District and established a convict settlement which was called "Blackman's Swamp" after James Blackman; Simpson had employed James Blackman as a guide because he had already accompanied an earlier explorer, John Oxley into that region.[7]

In the late 1820s, the surveyor J. B. Richards worked on a survey of the Macquarie River below Bathurst and also of the road to Wellington. On a plan dated 1829, he indicated a village reserve, in the parish of Orange. Sir Thomas Mitchell named the parish Orange, as he had been an associate of the Prince of Orange in the Peninsular War, when both were aides-de-camp to the Duke of Wellington, whose title was bestowed on the valley to the west by Oxley.[8]

Initial occupation by British graziers began in late 1829, and tiny settlements eventually turned into larger towns as properties came into connection with the road. In 1844, the surveyor Davidson was sent to check on encroachments onto the land reserved for a village, and to advise on the location for a township. His choices were Frederick's Valley, Pretty Plains, or Blackman's Swamp.

Blackman's Swamp was chosen, and it was proclaimed a village and named Orange by Major Thomas Mitchell in 1846 in honour of Prince William of Orange. At nearby Ophir, a significant gold find in Australia was made in 1851, resulting in a sporadic population movement which is known as the Australian gold rush. Additional gold finds in nearby areas led to the establishment of Orange as a central trading centre for the gold.

The growth of Orange continued as the conditions were well suited for agriculture, and in 1860 it was proclaimed a municipality. The railway from Sydney reached Orange in 1877. In 1946, 100 years after it was first being established as a village, Orange was proclaimed as a minor city.

Orange was proposed as a site for Australia's national capital city, prior to the selection of Canberra. The new capital city would have adjoined the town of Orange, which would have been included the surrounding federal territory.[9][10]

According to the 2016 census of Population, there were 37,182 people in the Orange urban centre.

Snow covered fields in Orange during an early snowfall event

Owing to its altitude, Orange has a temperate oceanic climate (Köppen Cfb), with warm summers (though with cool mornings) and cold, wet winters with frequent morning frosts and light to moderate, sometimes heavy snowfalls. The city is relatively wet for an inland location owing to orographic effects from Mount Canobolas, especially during the cooler months when snow falls; Orange is amongst the few cities in Australia to receive regular snowfall, and is likewise the snowiest city in Australia (not counting smaller towns such as Oberon). Due to its windward position that straddles the Great Dividing Range, Orange experiences wetter winters than the cities in the east such as Lithgow and Bathurst.

Compared with most population centres in Australia it has colder winters, especially in terms of its daytime maximum temperatures, owing chiefly to its westerly exposure. In summer, the average (and absolute) maximum temperatures are also lower than in most inland centres, on account of its elevation.[11] Owing to its inland location, the humidity is low in the summer months with the dewpoint typically around 10 °C. Having 99.8 clear days annually,[12] it is still cloudier than the coastal areas of Sydney and Wollongong (104 and 107 clear days, respectively), with a marked lack of sunshine in winter compared to summer.[13][14]

The climate has enabled the area to be a major apple and pear producer, and more recently a centre for cool-weather wine production.[15]

Orange is a well-known fruit growing district, and produces apples, pears, and many stone fruits such as cherries, peaches, apricots, and plums; oranges are not grown in the area, since its climate is too cool. In recent years, a large number of vineyards have been planted in the area for rapidly expanding wine production. The growth of this wine industry, coupled with the further development of Orange as a gourmet food capital, has ensured Orange's status as a prominent tourism destination.

Other large industries include:

The following primary schools are not within the city limits of Orange but are located within the rural fringe of Orange: 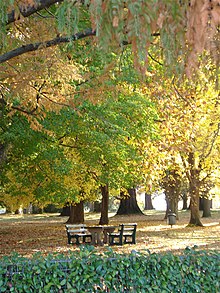 The following are listed as the suburbs within Orange City Council, according to the New South Wales Division of Local Government:[18]

Cadia-Ridgeway Mine is a large open cut gold and copper mine located about 20 kilometres south of Orange, the mine has been developed throughout the 1990s employing several thousand employees with an expected lifespan of several decades. Cadia is the second largest open cut mine in Australia after the Super Pit at Kalgoorlie. Large mineral deposits are also being uncovered from the more recently developed Ridgeway underground mine which is adjacent to the Cadia Mine.

The Orange wine region is defined as the area above 600m in the local government areas of Orange, Cabonne and Blayney and can be usefully described as a circle around Orange. The Orange region is good for grape growing and winemaking due to a combination of geology, soils, climate and temperature. Together these factors combine to produce grapes and wine of distinct flavours and colour. The climate perhaps plays the biggest part in giving Orange some distinct natural advantages – the cool temperatures during most of the growing season coupled with dry autumn conditions are ideal for grape growing.[21]

Orange is served by several radio stations, including 105.1 2GZFM, 105.9 Star FM, FM107.5 Orange Community Radio, 103.5 Rhema FM, HIT Country 88 FM and 2EL 1089AM – a commercial station that gets most of its programming from 2SM in Sydney. The Australian Broadcasting Corporation (ABC) also broadcasts from four radio stations in Orange including ABC Local Radio (2CR) on 549AM and three national networks – ABC Classic FM on 102.7 FM, ABC Radio National on 104.3 FM, and Triple J on 101.9 FM.

Of the three main commercial networks:

Subscription television service Foxtel is available in Orange and the surrounding region via satellite.

The local newspapers are the Central Western Daily, the Midstate Observer and Orange City Life. 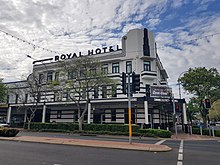 The Orange Solstice Swim Club was founded in 2017, by local resident Harley J Smith. The club meets every Summer and Winter solstice, to swim in one of the local swimming holes such as Gosling creek and Lake Canobolas. The winter festivity includes a warming soup after a chilling dip. The club is looking to branch into the Equinox celebrations also. [25] 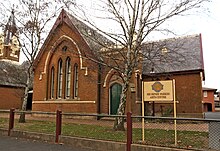 Orange has many attractions. There are bush walking trails in Orange including; Spring Glade Walking Track, Cook Park Heritage Walk, Summits Walking Tracks, Nangar National Park and .[26] Borenore Caves is a series of limestone caves. Duntryleague Golf Club and Clubhouse, Mount Canobolas and Federal Falls in the , Lake Canobolas, Gnoo Blas Motor Racing Circuit, the historic centre of Orange and the are also near the town.

Orange is situated on the Mitchell Highway, linking the city to Molong, Wellington, Dubbo and Bourke to the north west, and to Bathurst to the east and from there to Sydney via the Great Western Highway (260 km or 160 mi). Due west are Parkes (100 km or 62 mi) and Forbes (125 km or 78 mi), which is midway along the Newell Highway, running from Brisbane, Queensland to Melbourne, Victoria. In 2007 a bypass road, known as the northern distributor road, was opened for use after decades of planning.

Orange Buslines operate a number of routes within the city and a service to the neighbouring city of Bathurst. Newman's Bus Service operates route two on weekdays to Blayney. Australia Wide Coaches operate a daily coach service to Sydney.

NSW TrainLink operate several coach services with connecting train services from Lithgow to Sydney, as well as a less frequent coach service to Cootamundra for connection to Melbourne.

Orange is also serviced by a regional-class airport, Orange Airport, located approximately 15 km to the south of the city, in an area known as Huntley.

Orange has two railway stations. The main station, on the Main Western Line to Bourke, was opened in 1877[27] and is served by the daily NSW TrainLink Central West XPT service between Sydney and Dubbo and the weekly Outback Xplorer service between Sydney and Broken Hill. A smaller station, opened in 1970,[28] known as Orange East Fork, lies on the branch line to Broken Hill was served by the weekly Indian Pacific service to Perth but due to low passenger numbers using this station (16 for the entire year 2017) this "bare bones" station is no longer used and the Indian-Pacific no longer stopping between Mt. Victoria and Broken Hill.[29]

Orange has a number of heritage-listed sites, including:

The first batch of harvested stormwater was released into Suma Park Dam on 21 April 2009. The harvested stormwater was tested by Analytical Laboratory Services, an independent laboratory based in Sydney. ALS tested for 90 potential pollutants. The tests revealed that the water quality met all targets. The first batch contained 14 megalitres. It is believed to be an Australian first for harvesting stormwater for potable use. The hardware is in place, operating rules have been developed and environmental factors and impacts on downstream users have been considered. A three-month trial will ensure all these elements are working together to ensure high water quality and environmental standards are met.

There are several phases involved in the commissioning period. The hardware, which includes three separate pumping stations, creek flow monitoring points and advanced electronics including fibre optic cables, will undergo further operating tests. The other elements of the scheme include a weir on Blackmans Swamp Creek, which creates a 3 megalitre pool and the site for the first pump station, a 200 megalitre dam and two 17 megalitre batching ponds. The pumps on the creek transfer stormwater to the 200 megalitre dam at a rate of up to 450 litres per second and are designed to rapidly extract peak storm flows from the creek. The operating rules require that a base flow immediately downstream in the creek must be maintained. The creek flow monitoring points ensure these standards are met. The monitoring station also measures when harvesting can commence. The trigger is flows passing the monitor in Blackmans Swamp Creek exceeding 1000 litres per second.

The local mine, Cadia-Ridgeway Mine, uses the city's treated effluent to supplement its water supply.

Orange is currently planning to implement a pipeline from the Macquarie river to boost the town water supply. This is hotly debated, and researchers believe that it will endanger threatened wetland areas.[60]