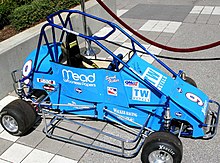 Quarter Midget racing is a form of automobile racing. The cars are approximately one-quarter (1/4) the size of a full-size midget car. The adult-size midget being raced during the start of quarter midget racing used an oval track of one-fifth of a mile in length. The child's quarter midget track is one quarter that length, or 1/20th mile (264 feet).

An adult-size midget in the 1940s and 1980s could reach 120 miles per hour, while the single-cylinder 7-cubic-inch quarter midget engine could make available a speed of 30 miles per hour in a rookie class (called novices), or one-quarter the speed of the adult car. Most of the competitive classes run speeds near 45 miles per hour. Current upper-class quarter midgets can exceed 45 miles per hour, but remain safe due to the limited size of the track.[1][2] Quarter Midget racecars have four-wheel suspension, unlike go-karts.

The drivers are typically restricted to ages 5 to 16.[1][2] Tracks are typically banked ovals one-twentieth of a mile long, and have a surface of dirt, concrete, or asphalt.[1]

Quarter Midgets have been around in one form or another since before World War II, There are three sanctioning bodies for Quarter Midgets, Quarter Midgets of America (QMA), PowRi Quarter Midget Racing League and United States Auto Club (USAC). There were over 4,000 quarter midget drivers in the United States in 2007.[3] Many of today's most recognizable names in racing got their start in quarter midgets, including A. J. Foyt, Jeff Gordon, Sarah Fisher, Jimmy Vasser, Joey Logano, Brad Keselowski, Terry Labonte, and Bobby Labonte to name a few.

Quarter midget cars can be reasonably affordable or can cost nearly as much as some full-sized racing cars. Engines can cost from $400 to $8,000. Car chassis can cost from $1,500 (used) up to $6,000 (new). Tires start at $50 each. There are many brands of cars as well as custom cars made by individuals. Some of the common brands are Stanley Racing, N/C chassis (Nervo/Coggin), Talon Chassis, Bullrider Racecars, Tad Fiser Race Cars, Rice Cars, Ashley Chassis, Cobra Race Cars, Storm Chassis, GT American, And Afco race cars. Cars are covered by body panels which are made of fiberglass, aluminum, or occasionally carbon fiber.

Engine costs have driven a number of changes over the years. As the cost of the Deco engine platform continued to rise, Honda engines were adopted. The move from Deco to Honda was first highlighted by an exhibition race at the 1988 Western Grands in Pueblo, Colorado. Attempts to put the Deco/Continental engines back into production failed. Later problems with Honda engine revisions and parts tolerances led to the adoption of Briggs & Stratton engines as a cost-effective engine platform. This adoption has come in the form of both the World Formula and Briggs Animal engines. USAC started using Animal engines in 2010. QMA planned to introduce the Animal engine platform beginning in 2012 and begin phasing out the Honda platform altogether in 2013 but has not moved away from the Honda engine platform. USAC includes the Animal and Honda platforms. USAC has recently discarded all of the Deco platform and introduced the Light and Heavy modified World Formula for 2017.