Reading Racers (known as the Reading Bulldogs for 2006 and part of 2007 season) are a British motorcycle speedway team. Formed in 1968, they won four British League titles during their history. The club closed in October 2008 after the lease on Smallmead Stadium was sold and the site was demolished. In 2016 A group of Supporters got together to bring back the Racers. After holding various meeting throughout 2016, In September the Reading Racers rode in a challenge match against Weymouth Wildcats. In the Winter of 2016 The Speedway Action Group showed their interest in entering the SDL Southern Development League. This league was given the go ahead from the Speedway Control board and Reading Racers along with Weymouth, Plymouth,Kent and Exeter formed the SDL. Reading have a Facebook and Twitter page also they have launched ReadingRacers.co.uk as their official website. The 2017 season was Reading's first back in a League since 2008. They were unbeaten during the season and are the current Southern development League Champions. 2018 the Racers will contest the 2nd year of the Southern development League, Their home track again this year will be Eastbourne. In 2019 the Reading Racers returned closer to home, they will be using the home of the Swindon Robins at Blunsden for their home matches. After a good start to the 2019 season they had some very bad news that up and coming star Sam Norris had a serious crash and was in intensive care with a brain injury. This shook the whole Racers team and management. The Racers didn't really recovery from this and finished the season mid table. After the 2019 season ended the Racers management Emma Stevens, Andy Griffin, Gene Carter and Mat Stevens started to plan for the 2020 season, they continued to make a number of contacts and leads to find a piece of Land in the Reading area ensuring the BSPA were kept up to date showing them details of progress which was asked for the previous season. Of which the Racers thought was sufficient as we were not asked for more from anyone from the SCB or BSPA. At the beginning of 2020 the team started to come together, only to be told by the BSPA that no nomadic teams could race unless they had their own track. So the Racers decided to take a break from the 2020 season to concentrate on following up plans to raise funds and find a Willing sponsor to build their Dream track back in the Reading area. After the Covid19 outbreak the whole Speedway season was put on hold.

The club was formed in 1968 and were originally based at the Tilehurst Stadium until it was closed in 1973. In their final year the Racers won their first British League title with the regular septet of Peter Murray, Richard May, Anders Michanek, Dag Lövaas, Geoff Curtis, Mick Bell and Bernie Leigh.[1][2] Smallmead Stadium was constructed during 1974 near the site of a refuse tip close to Junction 11 of the M4 motorway. The Racers returned for the 1975 season,[3] a crowd of 9,264 witnessed the opening meeting against Hull and Reading won the match by 18 points. The club finished 6th that campaign and had an average crowd of almost 6,500 every meeting. Between 1976 and 1979 the crowd figures remained high, despite a poor 1978 when the club finished 14th out 19 teams. 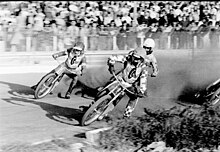 Reading Racers at the Smallmead Stadium in 1975

The club enjoyed a successful 1980 season, winning the British League title and attracting crowds of over 7,000 on a regular basis. The club made headline news with a £40,000 insurance bond payment for winning the league title, which gained much media interest. However, behind the scenes unrest in the management structure saw major changes at the end of the season with Bill Dore taking control of the club with local businessman Frankie Higley. Dore's daughter Pat Bliss became more involved in the running of the speedway and Dore's son Martyn was tasked with the maintenance of the track and stadium.

Despite tracking very competitive looking teams in the mid-1980s the club never achieved the dizzy heights of the start of the decade, until 1990 when the appointment of loyal fan Tim Sugar as the team manager saw the club win the league title in both 1990 and 1992, with top rider Per Jonsson also crowned world speedway champion in 1990. However, Jonsson suffered terrible injuries in a crash in Poland in 1994, and this had an adverse effect on the club and its fortunes.

1995 and 1996 were poor seasons for the club, as crowds dropped and media interest waned. The 1997 season saw the club stay in the Premier League, which became the second tier after the Elite League was formed; This bought some much needed success for the club as they were crowned league champions that year, with Dave Mullett (who had been part of the championship winning teams in 1990 and 1992) proving to be the best rider in the league, subsequently won the league cup in 1998. The period 1999 to 2003 were lean years for the club, which had seen veteran promoter Chris Shears and his son Ivan become part of the promotional set up.

By 2004, Ivan Shears (who soon earned the nickname of the tactical genius) had replaced long standing team manager Sugar and the club showed signs of resurgence with a large sponsorship deal with local telecomms company Euphony Communications. This secured the funds for the signature of leading English rider Danny Bird and highly rated Slovenian Matej Žagar. Injuries at key times denied Racers more success that year, but Bird along with loyal servant to the club Phil Morris (who replaced an injured Žagar) won the Premier League Pairs Championship in June of that season.

2005 was a disappointing season for Reading and by the end of the campaign there were signs that the club need new investment to survive. Consequently, the promotion sold the club to BSI Speedway in 2006. The new promotion took Reading into the Elite League and changed the club name to the Reading Bulldogs. Their first season was a huge success on track as the Bulldogs narrowly missed out on the title, losing by a single point to Peterborough Panthers in the play-off final. The success on track wasn't mirrored off track, as crowds were on average around 650 people short of the 2,000 required each meeting to break even, the fact that Smallmead Stadium had no seen no real investment to its infrastructure since it was built was a key factor in this, although many fans also blamed the changing of the club nickname from Racers to Bulldogs, a move which had seen a number of the hardcore fans of the club boycott meetings as a protest.

The majority of the successful 2006 team were retained for the 2007 season, but crowds dropped alarmingly, with some meetings being witnessed by less than 900 fans. This led to BSI deciding to put the club up for sale mid-season, which resulted in the club being purchased by Swindon-based businessman Mark Legg, who appointed ex-rider Malcolm Holloway as his co-promoter, with the astute Tim Sugar returning as Team Manager, whilst the club's press officer and webmaster Andy Povey was appointed to head up rider recruitment, marketing and commercial activities. It was confirmed at the time of the takeover that Reading would see out the remaining fixtures of the 2007 season in the Elite League.[4] the club also reverted to their original Reading Racers name.[5] the new promotion and new change had little effect on the crowds and the new owners lost a reported six figure sum in the space of four months.

As a result, the club opted to drop a division to the Premier League in 2008, the season was a traumatic time on and off track for the club.[6] Povey and Holloway's team building decisions proved disastrous, with only Dane Ulrich Østergaard's performances saving their blushes on numerous occasions. However performances on track were overshadowed by the news that the Smallmead Stadium lease expired in October 2008 and would not be renewed.

With Smallmead Stadium's lease expiring in October 2008, the club announced plans for new stadium at Island Road, Reading. A new complex featuring greyhound racing, and a casino as well as speedway has been given the go ahead by the local council. The plans showed the new track will be ten metres longer than the track at Smallmead, which was their home for last thirty-two years (it was always intended to be a temporary track but the new stadium never got built). However the construction of the new stadium has been delayed numerous times and now will not be ready until the 2012 season at the earliest. The plans for the new stadium did not go ahead as agreed. The Reading Speedway Action Group are currently seeking new Land in the area. The Reading Racers return to track in 2017 at an adopted home in Eastbourne. They completed in the Southern development League and won the league to be One the inaugural winners of the new League. In 2018 they again used Eastbourne as their home track and finished second to Kent kings in the league. In 2019 they were given a chance to come closer to home by using Swindon as they home track. This season started well, but due to a very bad injury to One of their star riders Sam Norris the team struggled to get a replacement and finished mid table.

In July 2010 it was reported that Reading based entrepreneur Andy Povey had purchased the promotional rights to the club from Legg. Povey had been part of the backroom set up at Reading since 2001 and held responsibility for the design and build of the club website, public relations, marketing and commercial activities. He is also engaged by the British Speedway Promoters Association as their head of Marketing and Communications, also acting as the interface between the sport and SKY Sports, working closely with SKY's chief commentator and presenter Nigel Pearson. The Promoter rights are now with the Reading Speedway Action Group who are seeking land in the Berkshire area to build a stadium, to bring Racers home. Their vision is to be in the Berkshire area by 2020.