Stock Car Light is a touring car racing series based in Brazil. The series returned in 2018, having replaced the previous Campeonato Brasileiro de Turismo ,Copa Chevrolet Montana formerly known as Stock Car Copa Vicar, ' and Stock Car B which had run since 1993. The series is the category of access to Stock Car Brasil. 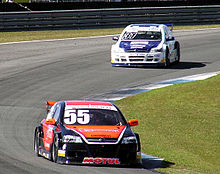 In 2010, another change in the access division. The merger between the Copa Vicar and Pick Up Racing resulted in the creation of the Copa Chevrolet Montana, with the engine and the first look of the pick-ups, inspired in the street version of the Chevrolet Montana. Strong and collecting outstanding teams and drivers in the country, the strong division arrived in search of their place in the national automobile scene.