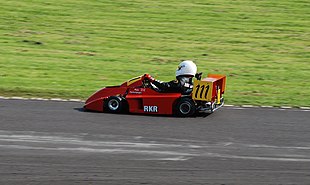 Superkart is a form of motorsport road racing in which the class is a racing vehicle sized like a kart but with several characteristics more strongly associated with open-wheel racing cars.

The most obvious difference between a Superkart and any other form of kart is that they have full aerodynamic bodykits and can race on car circuits over 1,500 metres in length. The power unit, most often, but not exclusively two stroke 250 cc engines, can be specially designed kart engines or production motorcycle engines with either five or six-speed sequential gearboxes. Owing to their high top speed and superb cornering ability, a Superkart's aerodynamic bodywork includes a front , larger sidepods, and a rear wing. They use either 130-or-150-millimetre-diameter (5 or 6 in) tires and wheels and most often race on full size auto-racing circuits.

Superkarts are raced worldwide. There is a multi-event CIK-FIA European Superkart Championship (for 250 cc karts only),[6] and there has in the past been a World Championship, which was last run in 1995.[7]

At some circuits, Superkarts are the outright lap-record holders,[12] at others they run at around Formula 3 lap times.[citation needed] 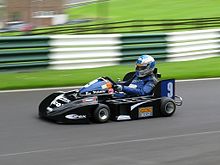 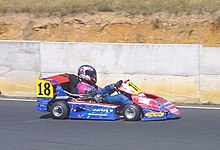 Superkarting in Australia has, since 1989, referred to any form of racing kart to race on full-size motor racing circuits, usually as sanctioned by the Australian ASN, CAMS. 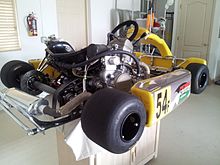 Road & Track reports that Supercarts cost between $15,000 to $20,000 USD in 2005.[2] Entries of 60 or more are common in Britain. Overtaking tends to be easy, as there is room to get past, so the races tend to be full of action. Race lengths tend to be around 20–25 miles (30–40 km), because the fuel tanks are quite small, so at most meetings that feature Superkarts, the karts race is often a brief, spectacular highlight (U.S. Superkart races are a timed 30-minute race; Pre-Final on Saturday, Final on Sunday).

A global category, Superkarts are endorsed by the FIA, and were featured as a support category to the French Formula 1 Grand Prix at Magny-Cours in 2007 where they bettered Porsche Supercup lap times.[1]