For other tournaments with similar names, see Tasman (disambiguation) § Sport. 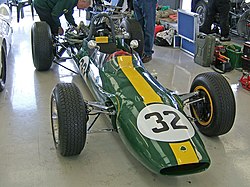 The Tasman Series (formally the Tasman Championship for Drivers [1] was a motor racing competition held annually from 1964 to 1975 over a series of races in New Zealand and Australia. It was named after the Tasman Sea which lies between the two countries. The Tasman Series races were held in January through to late February or early March of each year, during the Formula One off season, taking advantage of winter in the Northern Hemisphere to attract many top drivers to summer in the south. The Tasman Cup was the permanent trophy awarded to the winning driver.[1]

The Tasman initially started in 1960 as a series of unrelated races between Australia and New Zealand.[2] In 1964 it was renamed Tasman Cup. Until 1969, the Tasman Formula specified open-wheel single-seater racing cars similar to Formula One cars, yet retaining F1 engine rules that were in effect until 1960. Thus, engines of 2500 cm³ that were obsolete for the contemporary Formula One class were eligible for the Tasman Formula.

After F1 upgraded to 3000 cm³ in 1966, the Tasman Formula regulations continued to specify a 2500 cm³ limit for another four years. Usually, the chassis of the previous F1 season were fitted with "Tasman" engines, and entered "down under". In what many[who?] consider Tasman's zenith season, 1968, Cosworth even produced a Tasman variant of its legendary DFV V8, known as the DFW, and BRM equipped its cars with a reduced capacity version of their F1 V12. In 1969 both Lotus and Ferrari contested the series with two cars teams, Jochen Rindt and Graham Hill in Lotus 49BTs and Chris Amon and Derek Bell in Dino 246 Tasmania cars which used F2 chassis fitted with modernised versions of the late 1950s F1 2.4 Dino V6 engine. Piers Courage strongly challenged the work teams in a Frank Williams Cosworth 2.5 BT24 Brabham which beat the Lotus and Ferrari teams at Teretonga in New Zealand.

Unfortunately for the Tasman Series, F1's "return to power", coupled to ever increasing costs, reduced the cachet of its Antipodean sister and after 1969 teams became increasingly unwilling to invest significant funds into what many perceived as a lesser championship. Only one Cosworth DFW 2.5 powered car appeared in the 1970 and 1971 Tasman series, Bell driving an uncompetitive Goodyear shod Wheatcroft Brabham BT26 in 3 rounds in 1970 and Amon and fellow Kiwi David Oxton each contesting 2 rounds of 1971 series in the ex Andretti March 701.

In an attempt to reduce costs, the Tasman Formula was extended to incorporate Formula 5000 cars from 1970[3] and the limit on pure racing engines was reduced from 2.5 litres to 2.0 litres from 1972.[4] Even these changes failed to contain spiralling costs and at the end of the 1975 event the series folded.

For two brief years beginning in 1999 the Tasman Series was revived as a series for Formula Holden racing cars with Simon Wills and Andy Booth winning the two series held exclusively in New Zealand.

The Tasman Series is planned to be revived as part of the new Formula Thunder 5000 series.[5]

Note: values in parentheses include the results from all races, not all of which counted towards the championship.