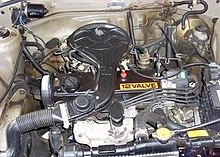 The 2E engine in an E90-series Corolla

The Corolla E90, introduced in 1987 for the 1988 model year, was the sixth generation of cars sold by Toyota under the Corolla nameplate. It was the last generation of Corolla to be classified as a subcompact car and the first to be exclusively front-wheel drive or all-wheel drive;[3] the performance option of rear-wheel drive was dropped.

For general export, the trim levels were Base, XL, GL, SE, and SE Limited. The GT-i (known as the SX Seca and/or Hatch in Australia) was a high-performance model powered by the 4A-GE engine; it was offered with hatchback and also five-door liftback bodywork in some markets. The North American GT-S coupé shared the same engine. The all-wheel drive Sprinter Carib wagon used a beam axle rear suspension with coil springs, while the rest used struts all around. In South Africa, the E90 was manufactured and marketed by Toyota under the Carri, Conquest, and Tazz model names. In a pair of similar joint ventures with General Motors, E90 variants with minor cosmetic changes were locally manufactured and sold as the Geo Prizm and Holden Nova in the United States and Australia respectively.

The majority of the Corolla range was replaced in June 1991 for the Japanese market, but production for export markets continued into 1992, and Australian Holden production extended until mid 1994. The all-wheel drive wagon was sold from 1988 to 1994 and had different bodywork to other Corollas; it replaced the Tercel 4WD Wagon/Sprinter Carib in Toyota's lineup. It retained the Sprinter Carib name in Japan, but was marketed as the Corolla Touring in Europe and some other countries, and as the Corolla All-Trac in the United States.

The 1.3-liter sedan has a four-speed manual transmission (later all 1.3-liter engines had five-speeds) or a three-speed automatic transmission. The 4WD sedan is powered by the 1.6-liter 4A-F. The 1456 cc 3E engine was only fitted to the Japanese market Van (wagon) commercial version.[4] The only sedan with the high output 1.5-liter 5A-FHE engine was the SE-Limited G; the FX (hatchback) received this engine in the FX-VS and FX-ZS models.

The FX hatchback was oriented at sportier drivers in Japan and was only available with the 1.5-liter 5A engine and with the powerful 4A-GE engine. Only a limited number of these were sold with the five-door bodywork. The Sprinter sedan has a third window in the C-pillar and was unique to Toyota Vista Store Japanese dealerships. The five-door liftback was only available to the Sprinter in Japan, although Europe and some other export markets received this bodystyle with Corolla badging.

The AE92 Levin and Trueno were also fitted with a supercharged engine. It used an SC12 roots type supercharger and a top mounted intercooler that was fed cool air via a scoop on the bonnet. They generated 206 N⋅m (152 lb⋅ft) at 4400 rpm as opposed to the naturally aspirated 4A-GE's 136 N⋅m (100 lb⋅ft) at 4,800 rpm.[4] In May 1989, the 90-series Corolla received a light facelift, including larger bumpers and a shift to fuel injected engines for all models aside from the 1.3. Also new was a four-wheel-drive diesel sedan using the 2-liter 2C engine.

Asian market Corollas originally came with four-door sedan (1.3-liter and 1.6-liter) or five-door liftback bodywork (1.6). The engines were the 12 valve 2E with 72 PS (53 kW) or the Twin Cam 16-valve 4A-F with 94 PS (69 kW). All engines were carbureted and without catalysts. There is also a GT variant which features disc brakes on all wheels, additional gauges (volt meter & oil pressure gauge), performance suspension and a more powerful 1.6-liter 4A-GE engine with 142 PS (104 kW).

In the Philippines, nicknamed as the "Small Body", the sixth generation Corolla was initially introduced in March 1989 with 3 trim levels: XL, XE and GL. Both the XL and XE variants came with the 1.3 liter SOHC 2E engine, while the GL variant, which is the top-of-the-line model, came with the more powerful 1.6 liter DOHC 4A-F engine. XL variants were given 4-speed manual transmissions, while the XE and GL models came with 5-speed manual transmissions.

In Indonesia, this generation was assembled locally from 1988 to 1992 and marketed as the "Corolla Twincam", available as a 4-door sedan and 5-door liftback.

The sedan was available in 3 trim levels:

The liftback version was only available with the carbureted 1.6-liter DOHC 4A-F engine with equipment similar to the SE Limited sedan. Transmission was 5-speed manual.

In December 1988, Toyota formed a joint venture with Holden called UAAI to build and market the Toyota Corolla as the Holden Nova. This agreement paralleled two Corolla generations including both the E90 and E100 series.[5]

The European model Corolla featured either a four-door sedan and a three- or five-door hatchback, and the regular wagon basically has the front end of the Japan-spec Corolla FX, except for the all white clearance lights and the "TOYOTA" or the ellipse emblem instead of the "FX" or "GT" of the Japanese models. It has the standard side marker lights and the tail light with the integrated rear fog lamp (except for the wagon, which has the rear fog lamp on the tailgate.) European market Corollas also have headlight washers on the XL and the XLi models. The five-door liftback used the Japanese market Sprinter Cielo body in its entirety, although in Europe it was available with the little 1.3 liter engine as well. From August 1989 there was also a fuel-injected version of the 1.3-liter engine available to some European markets. The second generation Sprinter Carib was also sold as a Corolla in Europe, where it replaced the Tercel Wagon. This little four-wheel drive station wagon received the "Touring" suffix in most European markets.

The hatchback, representing the most popular and most closely contested market segment in Europe, suffered from being somewhat of a design afterthought since sedans have always been the mainstay of the Corolla lineup in the home market. As opposed to its European competitors, where hatchbacks received a tacked-on trunk to become sedans (the Orion, the Volkswagen Jetta, or the Opel Kadett sedan/Vauxhall Belmont), Toyota started with the sedan and derived the hatchback from it. As a result, the design was a bit truncated and trunk space was minimal at 281 L (9.9 cu ft).[6] This was only a fraction more than the much smaller Citroën AX, and considerably less than for competitors such as the Kadett and Fiat Tipo (390 and 345 L, 13.8 and 12.2 cu ft).

The diesel version saw substantial sales in countries such as Belgium and Netherlands, where the tax structure favored diesels but where there were also no laws hindering the sales of Japanese cars. In Europe it was only sold with the comparatively spartan XL equipment level. The diesel, while quite slow and with heavy steering, was competitive with similar European cars of the period.[6]

From late 1989 the 4A-GE engine in the GTi model was changed from the T-VIS equipped 'big port' variant to the non-T-VIS 'small port' version. For UK specification cars, this increased power from 124 bhp (92 kW) to 129 bhp (96 kW).[citation needed] The GTi was available as a hatchback or a liftback, although not all markets received both bodystyles. In Sweden, the 4A-GE equipped liftback was marketed as the Corolla CS (Coupé Sport), beginning in May 1991. It had the new 125 PS (92 kW) version of the 4A-GE engine and ventilated disc brakes all around.[7]

The E90 went on sale in North America for the 1989 model year. North American production of the sedan took place at NUMMI and Cambridge, Ontario, Canada. These two plants made 279,000 units, making a total of 4.5 million of this generation (AE92) made. The NUMMI plant had been building the E80 Corolla FX (hatchback), but this never sold well in the United States and so Toyota switched to building the sedan with the new series.[8] The North American models depart from the previous generation's boxy styling, for a more contemporary look and improved aerodynamics. They feature longer bumpers and small red conspicuity lights on the rear quarter panels. Cabin air exits through stylish vents behind the rear side windows.

Minor changes for the 1991 model year include the modern Toyota emblem used corporately since 1989 on the grille, all-red taillights, door-mounted and manual lap front seat belts, and new hubcaps for the DX. The rear garnish was deleted for the base model. 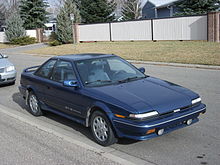 The North American Corolla Sport coupé with retractable headlights was basically a Sprinter Trueno with different front corner lights and longer bumpers. Trim levels are SR5 and GT-S. The GT-S is powered by 4A-GE engine and comes with full body kits. In 1990 the 4A-GE received a revised cylinder head and intake manifold. The new motor featured higher compression, the removal of the T-VIS system, and smaller ports in the intake manifold and is thus commonly referred to as the "smallport" version. Horsepower jumped from 115 hp (86 kW) to 118 hp (88 kW) and 135 hp (100 kW).

The four-wheel drive All-Trac wagon in Base and SR5 trim levels were sold from 1988 to 1992 and had different bodywork to other Corollas. The Corolla 4WD sedan was produced in very small numbers, shared the same body as the AE92 sedan, with the only visible difference being the tire size.

The Geo Prizm shared a slightly different body with the Japan-market Sprinter sedan and Cielo liftback. These models were slightly more basic than their European/Japanese versions. The GSi version was equipped with the 4A-GE.

There were only two body styles sold in South Africa. The sixth-generation five-door hatchback that was made in South Africa was marketed as the Toyota Conquest. The four-door sedan was also available, but with "Corolla" badging. Production began in October 1988, with a 1.3 liter 53 kW (72 PS) "2E" engine or the 1.6 liter "4A-F" with 70 kW (95 PS). The twin cam version of this was also sold, as the GLi Twin Cam for the sedan and RSi for the Hatchback (4A-GE), with 100 kW (136 PS). It was also sold as a panel van called the Conquest Carri. The Conquest Carri was simply known as the Toyota Carri from 2000.[9]

In October 1996, an entry-level model called the Toyota Conquest Tazz appeared. This model had a very low equipment level, originally only available with a four-speed manual mated to the 1.3l 2E engine and missing things such as a rear windshield wiper or a cigarette lighter – however, the Tazz received a twin-tip exhaust and body coloured bumpers.[10] A five-speed became available three years later. The higher end version was called the Conquest Zip which was powered by the 1.6l 4A-FE engine. From October 2000 the car received a light facelift with a more ovoid front end treatment and the name was changed to simply Toyota Tazz. This model continued to be built until July 5, 2006. The first version of the Tazz was only offered with a 1300 cc engine, while the facelifted version offered two models: 130, and 160i. Power was 55 kW (75 PS) and 79 kW (107 PS) respectively, same as for the Conquest/Corolla from September 1993 on. The Conquest and Corolla were also available in the 1.8 liter 7A-FE engined model beginning in September 1993; this replaced the earlier 1.6 Twin Cam in the Conquest and was available in a number of equipment levels in the Corolla (sedan), from GL to the mildly sporting GSX.