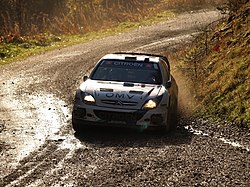 The Wales Rally GB is the largest and most high-profile motor rally in the United Kingdom. It is a round of the FIA World Rally Championship and was formerly a round of the MSA British Rally Championship and is based in North Wales. From its first running in 1932 until the 53rd event in 1997, it was known as the RAC Rally until adopting its current name in 2003 except in 2009 when it was Rally of Great Britain.

The inaugural event was the 1932 Royal Automobile Club Rally, which was the first major rally of the modern era in Great Britain. Of the 367 crews entered, 341 competitors in unmodified cars started from nine different towns and cities (London, Bath, Norwich, Leamington, Buxton, Harrogate, Liverpool, Newcastle upon Tyne and Edinburgh.)

Different routes are followed from the nine starting points, each approximately 1,000 miles (1,600 km) long, but all finishing at Torquay. On every route there are four controls in addition to the starting and finishing controls, and these are open for periods varying from seven to four hours. Competitors may report at these controls at any time during the hours of opening. ... At the final control they must check in as near their fixed finishing time as possible, and any considerable deviation from this time results in loss of marks.

As well as completing the route to a time schedule the competitors were required to perform a special test involving slow running, acceleration and braking. Additionally a Concours d'Elegance was held at the finish in Torquay. There was no official winner, although Colonel A. H. Loughborough in a Lanchester 15/18 was recorded as having the fewest penalty points in the decisive test at the finish.[1]

The following year's RAC Rally followed a similar format, but with Hastings as the chosen finish. Over three hundred competitors entered, and this time Miss Kitty Brunel, driving an AC Ace, was the driver with the fewest penalties.

The rally was run annually until 1939, after which the outbreak of the Second World War forced its suspension. However, it resumed in 1951, and has been contested every year since with only two exceptions: 1957 (due to the Suez Crisis) and 1967 (due to the outbreak of foot-and-mouth disease). This latter incident was on the eve of the event, so competitors staged a mock rally at the Bagshot proving ground as consolation for the press and television (ATV had been persuaded to provide major coverage with in-car cameras for the first time).

In 1960, organising secretary Jack Kemsley negotiated with the Forestry Commission to allow a two-mile (3 km) section of forest road in Argyll, Scotland to be used as a competitive section. It proved enormously successful, and the following year forest roads all over the country were opened up to the drivers. This, combined with the introduction of special timing clocks and seeding of entries, secured the rally's future, and cemented its reputation as one of the most gruelling and unpredictable fixtures on the calendar.[2] In 2016 an agreement was reached between the MSA and Natural Resources Wales to continue to use Welsh forest stages for three years.[3]

In 1971, 'spectator stages' were introduced and, by 1975 had become an important part of the event, usually at stately homes and other public venues like Chatsworth House and Sutton Park. The first day was, by then, devoted to these stages. Drivers did not enjoy them, and referred to them disparagingly as "Mickey Mouse stages" because of the lack of challenge they offered,[4][5] but nonetheless they contributed to the results. For example, in 1998 championship leader Tommi Mäkinen crashed out of the rally on one of these stages, and very nearly lost that year's world championship. More recently, they have given way to the 'Super Special Stages', which are equally maligned by the drivers, but just as popular with spectators.

Michèle Mouton at the 1984 rally with an Audi Sport Quattro

The 1986 RAC Rally was the last European event for Group B vehicles. These highly tuned turbocharged cars were to be banned as they were deemed too powerful and dangerous, in light of the various accidents in which they were involved. In the end, the Peugeot 205 T16 Evo. 2s of Timo Salonen, Juha Kankkunen and took three of the top four places, with only Markku Alén's second position in the Lancia Delta S4 preventing a monopoly of the podium.[6]

For many years the rally has traditionally been the last round of the World Championship, and therefore has staged many famous down-to-the-wire showdowns.

Until 1989 the event was held without crews performing reconnaissance runs through the route beforehand. From 1990 onwards the format which is now standard in international rallying was adopted.[7]

In 1991 the world championship came down-to-the-wire in the British forests, with Lancia driver Juha Kankkunen edging out Toyota's Carlos Sainz after the Spaniard suffered engine issues and went off the road in Kielder Forest and damaged his car.[8]

One year later and Sainz and Kankkunen returned to the RAC along with Frenchman Didier Auriol to fight for the 1992 title. Auriol's challenge would end with engine failure, and Kankkunen's hopes were also dashed when he went off and damaged his steering on the final day of the rally in southern Scotland. Sainz eventually won the rally and with it claimed his second world title.[9]

In 1995, it was estimated that around 2 million fans lined the forests to witness Scotsman Colin McRae win his second consecutive RAC Rally. In the process he beat teammate Carlos Sainz to take his first and only world title in front of thousands of fans at Chester Racecourse. [10]

McRae would have less fortune in future years; despite winning again in 1997, he was pipped to the title by Finn Tommi Mäkinen by just one point.[11] The Scot would come up short again in 2001 when he crashed out of an early lead, gifting the championship to his English rival Richard Burns.[12]

One of the most dramatic showdowns was 1998, when championship leader Tommi Mäkinen crashed out on one of the first day's spectator stages after his Mitsubishi hit a patch of oil, slid and tore a wheel off. This seemingly handed the title to Toyota's Carlos Sainz. However, in a cruel twist of fate Sainz's engine let go just 300 meters from the finish line of the final stage, meaning that Mäkinen claimed the championship title, with Luis Moya famously throwing his helmet through the car's rear window in frustration.[13]

In 2003, a four-way title fight was narrowed down to just two when Burns was forced to withdraw from the event for medical reasons, which would tragically claim his life two years later, and Carlos Sainz crashed out. In the end, Norwegian Petter Solberg would win the rally ahead of Sébastien Loeb, and consequently beat the Frenchman to claim his only world rally title by just one point.[14]

Nordic drivers have enjoyed rich pickings in the RAC Rally through the years. Home drivers won the first six runnings of the race from 1953, when an outright winner was first declared. However, in 1960 Erik Carlsson of Sweden drove his Saab 96 to a hat-trick of victories in 1960–1962. Of the nine drivers to have won three or more rallies, five have been Swedes, Finns or Norwegians. The record for most victories is currently five, won by Sébastien Ogier (2013–2016, 2018), who surpassed Finnish Hannu Mikkola (1978–79, 1981–82) and Norwegian Petter Solberg (2002–2005). Though, last time a Nordic driver won Rally GB, was in 2012 (Jari-Matti Latvala).

Until 1970, there was no overt sponsorship, but in that year advertising decals appeared on cars and the Daily Mirror newspaper sponsored the event. This deal lasted four years before finance company Lombard North Central took over in 1974. The event became known as the Lombard RAC Rally, and Lombard's name became synonymous with the event.

Following Lombard's withdrawal of sponsorship after nineteen years, the rally became known as the Network Q RAC Rally and later, the Network Q Rally of Great Britain. The rally has moved its operational base to Cardiff and competitive stage mileage is concentrated in Wales. With sponsorship from the Welsh Government, the event is now known as the Wales Rally GB.

However, with such an extensive history covering the whole country, there were demands for the "glory days" of the old RAC Rally. In this spirit, two events have recently been established, and cover the same classic stages which are no longer part of the WRC itinerary. The RAC Revival Rally uses modern, but less powerful cars, while the Roger Albert Clark Rally is a historic event using only pre-1972 machinery, and named after the first home winner of the race as a World Championship event. 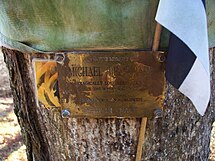 This is a memorial on the tree for Michael Park where he lost his life.

The 2005 rally was the twelfth event on the WRC schedule for 2005, held on 16–18 September 2005. It included the first indoor super special stage at the Millennium Stadium in Cardiff.

On stage fifteen, Peugeot driver Markko Märtin crashed heavily into a tree, and while he was unharmed his co-driver Michael Park sustained fatal injuries. It was the first death in the WRC in over a decade. The final two stages were cancelled and Sébastien Loeb, who would have won the event and the championship, voluntarily incurred a two-minute time penalty in order not to win under such circumstances, leaving Petter Solberg to be declared the victor.

A memorial for Park was unveiled in Märtin's homeland of Estonia and the damaged tree on the Margam Park stage of the rally where he died bears a plaque in memorial of him.

The Wales Rally GB was the final round of the 2008 FIA World Rally Championship and took place on 4–7 December 2008. World champion Sébastien Loeb crowned his season with victory in the rally.[15]

Cardiff was both the start and finish point for the rally, while the service area returned to central Swansea. For the first time since 2000 the rally featured stages in Mid-Wales and there were special evening stages inside the Millennium Stadium.

Conwy Castle was the start and Llandudno the finish point for the rally, while the service area was based in Deeside for the first time. New stages in North Wales were used such as Gwydyr and Chirk Castle.

Notes: * Prior to 1953, only class winners were officially recognised, and the overall winners show are the entrant who received the most points (or fewest penalties) in the event. No winners of any kind were recognised in 1935.[17] In 1996, due to the World Rally Championship's event rotation system used from 1994 to 1996, the rally counted only for the FIA 2-Litre World Championship for Manufacturers.