Wayne Michael Gardner AM[1] (born 11 October 1959) is an Australian former professional Grand Prix motorcycle and touring car racer. His most notable achievement was winning the 1987 500 cc Motorcycle World Championship, becoming the first Australian to win motorcycling's premier class.[2] His success on the world motorcycle road racing circuit earned him the nickname The Wollongong Whiz. Both of Gardner's sons, Remy and Luca, are motorcycle racers.

Gardner was born in Wollongong, New South Wales, Australia. He began his racing career in 1977 at the age of 18, riding a second-hand Yamaha TZ250 bike in the Australian championship and finishing second on debut at Amaroo Park. He went on to record his first win a few weeks later at Oran Park Raceway.[3] In 1981 Gardner was hired by Mamoru Moriwaki to race in the Australian Superbike championship aboard the Moriwaki Kawasaki Kz1000s.[4] Gardner and co-rider John Pace qualified their Moriwaki Kawasaki on pole position at the prestigious 1981 Suzuka 8 Hours, ahead of all the major factory racing teams.[5]

Fellow racer, Graeme Crosby gave Gardner his first opportunity to race in Europe.[6] Although Crosby was contracted to ride for Suzuki, he decided to sponsor Gardner to compete in the British Superbike championship riding Kawasakis run by the British Moriwaki concession owned by Crosby.[6] On the way to Europe, Gardner rode the Moriwaki Kawasaki to an impressive fourth-place finish at the 1981 Daytona Superbike race behind Yoshimura Suzuki riders Crosby, Wes Cooley and Honda's Freddie Spencer.[7] Moriwaki and Gardner proceeded to compete in the British championship, winning their first race in England.[8] Gardner entered the final race of the season with a chance to win the title but, an engine misfire relegated him to third place overall in the championship.[8]

Gardner's impressive results on the Moriwaki Kawasaki eventually earned him a contract with the Honda Britain racing team. He rode a Honda to a fourth-place finish in the 1982 Formula TT championship.[9] Gardner made his 500 cc Grand Prix debut with the Honda Britain team at the 1983 Dutch TT during which he was involved in an accident with reigning world champion, Franco Uncini.[6] Uncini fell off his bike as he was exiting a corner and as he tried to run off the track, he was struck on his helmet by Gardner's bike.[6] Uncini went into a coma but, subsequently recovered from his injuries.[6] Gardner failed to score any points in the two Grand Prix races he had entered in 1983.[2] In 1984, he won the British 500cc national championship for Honda and was able to compete in five Grand Prix world championship races.[2][6][10] He scored points in all five of the Grand Prix races in which he was able to compete in during 1984, including an impressive third-place finish at the Swedish Grand Prix, earning a seventh place in the final championship standings.[2] 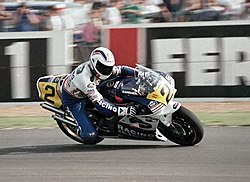 Gardner at the 1989 British Grand Prix

Gardner's performance earned him full support in 1986 from the Honda-HRC factory racing team alongside teammate Freddie Spencer.[6] He won his first Grand Prix race at the Spanish Grand Prix, before going on to win two more races and finish second in the championship behind Eddie Lawson.[2] In 1987, Gardner became the first Australian to win the 500 cc World Championship, winning seven of sixteen races and wrapping up the title with a win in the penultimate round in Brazil at Goiânia.[2] Gardner's race engineer in 1987 was fellow Australian Jeremy Burgess who had previously worked with 1985 World Champion Freddie Spencer.

In defense of his title in 1988, Gardner was hampered by the Honda NSR500 not being easy to ride. He finished second in the championship behind American Eddie Lawson who rode for the factory Marlboro Yamaha team.[2] He still managed wins in the Netherlands, Belgium, Yugoslavia and Czechoslovakia, and would have won at the Paul Ricard Circuit in France had he not suffered mechanical problems only a third of a lap from the finish while holding a 2-second lead.

Gardner's 1987 World Championship saw a sharp rise in the popularity of Grand Prix Motorcycle racing in Australia, with increased television and print media coverage. This led to the inaugural running of the Australian motorcycle Grand Prix at Phillip Island in 1989. The Wollongong Whiz gave the home crowd something to cheer as he won his home race in 1989, just edging out Wayne Rainey and Christian Sarron.[2] Unfortunately his season came unglued at the next round at Laguna Seca where he crashed and broke his leg, causing him to miss half of the season.[2][3] From the 1985 season, Gardner raced for the factory Rothmans Honda team and was joined on that team by fellow Australian Michael Doohan in 1989. Ironically, Eddie Lawson also joined Rothmans Honda in 1989 and went on to win his fourth World Championship.[3]

Gardner at the 1992 Japanese Grand Prix

Gardner had a frustrating season in 1990. After winning at Jerez in Spain, he missed three rounds through injury and only managed 5th in the World Championship. He did finish the season on a high note though, winning his second straight Australian Motorcycle Grand Prix at Phillip Island from teammate Mick Doohan and World Champion elect Wayne Rainey.[2] For over half the race, Gardner had to contend with the faring of his Honda threatening to part company with the bike after some of the front mountings had broken.

Gardner also won four Suzuka 8 Hours races in 1985, 1986, 1991 and 1992.[11][12][13][14] Gardner retired from motorcycle racing following the 1992 season but stayed closely involved with the sport, helping various riders like Daryl Beattie early in their careers. He rode at special events like the Goodwood Festival of Speed on classic Honda motorcycles and raced again at the Goodwood race meeting against fellow bikers James Whitham, the late Barry Sheene and ex-Formula One driver Damon Hill.

Wayne Gardner's first foray into car racing came when he was to race a Formula Holden in the final round of the 1990 Australian Drivers' Championship which was run as a support race to that years Australian Formula One Grand Prix, driving a Shrike 002 built and developed for the category by the students of the Croydon Park Institute of TAFE in Adelaide where the race was held. After only arriving in Adelaide on the opening day of practice having spent the previous week in Japan testing his 1991 NRS500 Grand Prix bike, Gardner had qualified in a credible 11th place for his first competitive drive in an Open-wheel car. However, a crash into the wall just past the chicane at the end of the pit straight when he spun on coolant that had been dropped by the Ralt RT20 of Drew Price, heavily damaged the front of the car. He was hopeful that the car could be repaired for the race, but his chances ended when another car also spun on the coolant and crashed into the Shrike damaging it beyond immediate repair.

Following his retirement from the 500 cc championship at the end of 1992, Gardner turned his interests to four-wheeled motorsport.[15] He began his touring car career in 1992, driving the Raider Motorsport built Bob Forbes Racing Holden VN Commodore SS Group A, leased by Graham Moore for the 1992 Tooheys 1000 at Bathurst. The Moore/Gardner Commodore finished the crash shortened race in 26th place after qualifying 21st. Gardner's first drive in the race happened to be soon after the circuit was hit by rain which lasted for almost two hours, and his cause was not helped by the Commodore's windscreen de-mister not working which saw the screen fog up making visibility, already poor due to the heavy rain and fog on The Mountain, almost impossible. Also in 1992, Gardner raced 4 events in the German DTM for the Jagermeister-sponsored Linder Team running the #20 BMW E30 M3 Sport Evolution alongside team mate Armin Hahne, with little success.

In 1993, Gardner was recruited to drive a VP Commodore for the Holden Racing Team in the 1993 Australian Touring Car Championship, the first year of the 5.0 litre touring cars which later became the V8 Supercars. In November 1993, Gardner won one of the Group A support races at the Australian Grand Prix in Adelaide, after earlier in the year finishing third Tooheys 1000 co-driving with Brad Jones.[16] Many incidents while driving for the Holden Racing Team in 1993 led to him being given the nickname "Captain Chaos", and it was thought that his continued on-track clashes was what had led to his brief suspension from the team for that year's Sandown 500, though the real reason was that Gardner had been openly talking to both Holden and Coca-Cola about starting his own team.

For the 1994 season, Gardner formed his own team, Wayne Gardner Racing (sponsored by Coca-Cola), where he raced for three seasons with teammate, Channel 7 commentator Neil Crompton. The team's low point came at the Bathurst round of the 1995 ATCC in March. Soon after the start of the first heat, Crompton was hit by the VP Commodore of Phil Ward. This pushed him straight into Gardner's car and both of the Coke sponsored cars ended their race in the wall before they got to Hell Corner on the first lap (Ward continued on with little to no damage). The team recovered though and Gardner sensationally won the start and led the opening laps of the 1995 Tooheys 1000, before he and Crompton went on to finish 3rd in the race, while their teammates Brad Jones and former Bathurst winner Win Percy finished 5th, only a few seconds behind.

Gardner's ATCC highlight was winning the 1997 Calder Park round, held under lights at Calder Park Raceway. Following the withdrawal of their major sponsor Coca-Cola who chose instead to invest in the upcoming Sydney Olympics in 2000, thus losing a rumoured $2 million a year in sponsorship which made it basically impossible for the team to function financially, the team folded after a partial 1999 season with a leased car from Perkins Engineering, but he continued racing V8 Supercars until 2002, with the highlight of taking pole position for the FAI 1000 at Bathurst in 2000, in appalling conditions. Wayne Gardner also took a surprise win in the first round in the V8 Supercar Championship's inaugural season in 1997, at Calder Park Raceway. It was surprising, as Gardner had announced that due to a lack of available funds, it was unlikely that he would race the full 1997 season, and he wasn't considered a race or championship favourite.

Gardner also made a foray into the All Japan Grand Touring Car Championship, racing a works Toyota Supra in 1996, and raced in this competition until his retirement from motorsport in 2002.[17][18] He won a round of the championship in 1999 (at Fuji Speedway) and 2001 (at Sportsland SUGO). He also had the distinction in 2001 of being the only Toyota driver to finish every race that season, and he also finished every race in the points.

Gardner made a one-off appearance at the 1998 24 Hours of Le Mans. Gardner was entered in the Riley & Scott with Philippe Gache and fellow ex-motorcycle rider Didier de Radiguès. They qualified 26th, but failed to finish due to engine problems after completing 155 laps.[19]

In part sourced from[23]