A World Rally Car is a racing automobile built to the specifications set by the Fédération Internationale de l'Automobile (FIA), and that competes in the outright class of the World Rally Championship (WRC). The WRC specifications were introduced by the FIA in 1997 as a replacement for Group A regulations.[1] 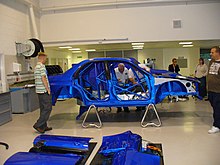 A Subaru Impreza WRC2006 being prepared by Prodrive

Between 1997 and 2010, the regulations mandated that World Rally Cars must have been built upon a production car with a minimum production run of 2500 units. A number of modifications could be made including increasing the engine displacement up to 2.0L, forced induction (including an anti-lag system), addition of four wheel drive, fitment of a sequential gearbox, modified suspension layout and attachment points, aerodynamic body modifications, weight reduction to a minimum of 1230 kg and chassis strengthening for greater rigidity. The maximum width was set at 1770 mm while front and rear tracks shouldn't exceed 1550 mm.

Unlike the requirements for the preceding Group A cars, manufacturers were no longer required to build "homologation specials" in order to meet approval. The base model did not need to have all the characteristics of the WRC car, as evidenced from cars such the Peugeot 206, 307, Citroën Xsara, and Škoda Fabia, which during this period had no road car variant with a turbocharged petrol engine or four-wheel-drive. One of the requirements was a minimum length of 4000 mm; the standard Peugeot 206 had an overall length of 3835 mm and Peugeot had to produce at least 2500 units featuring extended bumpers to comply with the required dimensions.[2]

To limit power, all forced induction cars were fitted with a 34 mm diameter air restrictor before the turbocharger inlet, limiting the airflow to about 10 cubic meters per minute. The restriction was intended to limit power output to 300 hp although some WRC engines were believed to produce around 330–340 hp.[citation needed] Engine development did not focus on peak power output but towards producing a very wide powerband (or power curve). Typically, power output in excess of 300 hp was available from 3000 rpm to the 7500 rpm maximum, with a peak of 330–340 hp at around 5500 rpm. At 2000 rpm (the engine idle speed in "stage" mode) power output was slightly above 200 hp.[3]

In an attempt to cut costs, since 2006 new regulations required mechanical front and rear differentials, while the central differential remained active. Active suspension and water injections were also prohibited. Cars entered by a manufacturer had to be equipped with the same engine for two rallies; further limitations were imposed on the changing of some parts, including suspension, steering, turbochargers, and gearboxes.

Starting in 2011, rules for WRC cars changed to be more restrictive. New regulations were derived from Super 2000 cars with a different aerodynamic kit. The cars were smaller models (there was no longer a minimum 4m length), with a 1600 cm3 direct injection turbo-charged engine with a 33 mm diameter air restrictor and a maximum pressure of 2.5 bar absolute (this will limit torque to about 400 N.m or less[6]).

Exotic materials (titanium, magnesium, ceramics and composite) were forbidden except when present in the base model. Carbon fibre and aramid fibre were very restricted ("only one layer of fabric is used and is affixed to the visible face of the part"), except for bodywork's side protections where multiple layers of aramid fibre are allowed.

The gear changes must be made with a mechanical linkage system, so paddle-shifters were outlawed. However the system was re-allowed in 2015. There was no center differential (earlier it used to be 3 differentials, with a center/3rd differential included), but the new regulation allows the only front and rear axle differential and a mechanical clutch to disconnect the rear axle during handbrake use (to reduce cost and make the cars' driving style more exciting again for both spectators and TV broadcasts). These two differentials must be mechanical, without electronic control or hydraulic or viscous systems (from 2006 to 2010 the center differential and previously all three could be active[7]). Minimum weight is 1200 kg empty and 1350 kg with driver and co-driver (in both cases with only one spare wheel).[8]