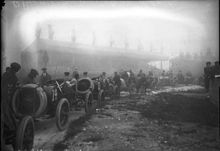 Racing cars at the 1913 French Grand Prix at Amiens

The restriction on Grand Prix cars for 1913 included an 800 kg (1,764 lb) minimum weight and an 1,100 kg (2,425 lb) maximum weight, as well as a 14 mpg‑imp (20 L/100 km; 12 mpg‑US) fuel consumption limit.[1] The buildup to the race and the race itself were marred by three fatal crashes. Bigio was killed testing his Itala before the race. In a separate incident before the race, Paul Zuccarelli was killed when his Peugeot crashed into a cart, and a spectator was killed when Kenelm Lee Guinness's Sunbeam crashed into a river. This made Amiens's fatality tally rise to 5 in the span of less than two months- 2 other people had been killed while testing on the roads being used for the circuit in May. After this race, this circuit- which included an 8-mile (13 km) long straight (which is now known as the D934)- was never used again for motor racing.[2]