The E9x was the first 3 Series sold with a turbocharged petrol engine.[2] The E9x family also saw the introduction of run-flat tyres to the 3 Series range. Cars with run-flats are not equipped with a spare tyre.

The E90/E92/E93 M3 is the only generation of M3 to be powered by a V8 engine. Introduced in 2007,[3] it uses the BMW S65 naturally aspirated V8 engine and was produced in sedan, coupe and convertible body styles.

Following the introduction of the F30/F31 3 Series in February 2012, the E90/E91 sedans and wagons were phased out. However, the E92/E93 coupes and convertibles remained in production through the 2013 model year,[4] after which they were replaced by the F32/F33 4 Series models.

The design for the fifth generation 3 Series was frozen in mid-2002, approximately 30 months before the start of production.[5] The sedan and wagon were designed by Joji Nagashima.[6][7] Marc Michael Markefka designed the coupé and convertible.[8]

The E91 wagon/estate models were marketed as 'Touring' in Europe and 'Sports Wagon' in the North America.[12] Optional equipment included a panoramic sunroof, which extends to the rear passenger area. Trim levels typically were similar to the E90 sedan, however the M3 wasn't produced in the wagon body style.[13]

Several markets outside Europe only offered a small subset of models in the wagon body style. In the United States and Canada, the only wagon model available prior to 2007 was the 325xi,[14] and then the 328i and 328xi from 2007 onwards.[15]

In August 2006, one year after the sedan was introduced, the E92 coupé body style was unveiled.

Compared with previous generations of the 3 Series, the coupé has more external styling differences to the sedan models. These include the tail-light design (L-shaped on the coupe), more steeply angled headlights and smaller side windows. As per its E46 predecessor, the doors of the coupe are longer and have frameless door windows, the rear seat holds two passengers (compared with a three-person bench for the sedan) with a rear centre console tray and the front seatbelts are on motorised arms that extend from the B-pillar to hand the seatbelts to the driver and/or passenger.

The E92 was the last generation to include coupé (and convertible) body styles as a part of the 3 Series range. For later generations, these body styles are marketed as the 4 Series. Despite the E90/E91 being phased out for the F30/F31 after the 2011 model year, the E92/E93 continued through the 2013 model year. It was then succeeded by the F32/F33 for the 2014 model year.

The E93 convertible was BMW's first model to use a retractable hardtop (folding metal roof), instead of the cloth roof as previously used. The E93 was one of first retractable hardtops in its price range.[16][17] The "Comfort Access" option allows the roof to be raised and lowered using the key fob. The E93's side windows are 30 percent larger than its E46 convertible predecessor, resulting in a 38 percent increase in visibility.[18]

The BMW 3 Series convertible was often priced higher than direct rivals, however reviewers have praised its passenger/boot space (even with the roof down), driving dynamics, weight and chassis rigidity.[19][20][21][22]

Official specifications are as follows:[23]

Since the following generation of 3 Series used turbocharged engines for the entire model range, the E90/E91/E92/E93 was the last 3 Series to be available with a naturally aspirated engine.

At the front, MacPherson struts with an aluminum hub carrier and aluminum dual lower links forming a virtual pivot point are used. This design was previously for used on all 5, 7 and 8 series BMW models.

Optional equipment could be ordered individually or combined into packages. Optional interior colours, known as BMW Individual, were also available at extra cost.

The M3 model was powered by the BMW S65 V8 engine and produced in sedan, coupe and convertible body styles.

Other changes compared to the 335i include stiffer engine mounts, a higher-flow exhaust system, an upgraded cooling system, a different steering wheel, sport seats and "335is" badging on dash and in the instrument cluster.[37][38] Exterior differences are larger air openings in the front bumper, a rear bumper that incorporates a diffuser-style piece, black kidney grills, and 18-inch or 19-inch "Style 313" wheels.[39]

In September 2008, the facelift (LCI) versions of the sedan and wagon were released for the 2009 model year. Compared to typically subtle BMW LCI changes, these changes were relatively extensive.

Styling changes included front and rear bumpers, wing mirrors, headlights, taillights, boot lid, wider kidney grilles and revised crease lines for the bonnet.[41][42] The new 2009 - 2011 facelift (LCI) AWD models became known as "xDrive" models, unlike the previous 2006-2008 (pre-lci) AWD models, which were labeled as "xi" models. The new xDrive models received xDrive badges on the bumper and both the right and left sides right below the side marker lamps. For the interior, crash-activated head restraints were added to the front seats, the optional "Professional" navigation system was updated, iDrive was updated and the resolution of the display was increased.[43]

For the 2010 model year,[44] the Sport, Lifestyle and Exclusive Edition were introduced for sedan and wagon models. The 316d wagon model was added, as was the 320d EfficientDynamics Edition sedan.

The Euro NCAP noted the poor pedestrian protection awarding 4 points out of 36, reporting the 3 Series was "very disappointing" in this measure.

In November 2017, BMW recalled 672,000 3 Series cars from model years 2006–11 with climate control system electronic components at risk of overheating, due to a faulty blower motor.[52]

In 2002, Norbert Reithofer and Development Chief Burkhard Goeschel started an initiative to halve the time it took to reach full production of the next generation 3 Series from six months to three.[53]

The production dates for each body style are as follows:

First marketed in March 2005, the car quickly became BMW Group's best-selling car worldwide, and by the end of the year 229,900 vehicles had been delivered.[63] 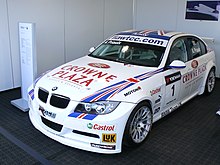 BMW WTCC works driver Andy Priaulx won the 2006 and 2007 World Touring Car Championships in the 320si E90, and four other drivers achieved over 35 wins in the championship.

The E90 320si was used by several teams in the British Touring Car Championship (BTCC). The 2009 BTCC Drivers Championship was won by Colin Turkington using the E90 320si.