The BSA A7 was a 500cc motorcycle model range made by Birmingham Small Arms Company (BSA) at their factory in Armoury Road, Small Heath, Birmingham. The range was launched in 1946 using a 495 cc (30.2 cu in) long stroke engine. An improved 497 cc (30.3 cu in) version based on the BSA A10 engine was launched in 1950. The various A7 models continued in production with minor modifications until 1961/2 when they were superseded by the unit-construction A50 model.[4]

After the 1938 launch of the Edward Turner designed Triumph Speed Twin, BSA needed a 500cc twin to compete with the Speed Twin. Designed by Herbert Parker, David Munro and BSA's chief designer, Val Page, the BSA A7 was the first of the BSA twin-cylinder motorcycles. The outbreak of World War II delayed the launch and several prototypes were built during the war years. The model was finally launched in September 1946 when hostilities had ended.

The very first A7 off the production line was flown to Paris for the first motorcycle show after the end of the war.[5] There was huge demand for affordable transport after the war and the simplicity of the A7 twin was helped along by the slogan 'It's time YOU had a BSA!'. 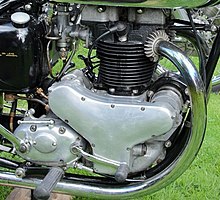 1947 "long-stroke" A7 engine with bolted on gearbox 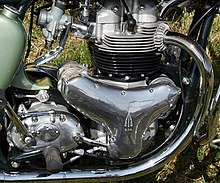 The 495 cc (30.2 cu in) twin cylinder engine produced 26 bhp (19 kW) and was capable of 85 mph (137 km/h).[1] The engine had a long stroke with a bore and stroke of 62 mm × 82 mm (2.4 in × 3.2 in). A single camshaft behind the cylinders operated the valves via long pushrods passing through a tunnel in the cast iron block. This system needed a considerable number of studs and nuts to fasten down the cast iron cylinder head and rockerboxes, many of them deeply recessed and requiring well-made box spanners or the then uncommon sockets. As with other British motorcycles of the period, this kind of set-up regularly led to oil leaks.[4]

Most motorcycles of this period tensioned the primary chain by drawing or rotating the gearbox backwards on a hinge with threaded rods, this was known as pre-unit construction. The first A7 had a fixed gearbox, bolted to the back of the crankcase, and an internal tensioner for the duplex primary chain. However, in 1954 when the swinging arm was introduced, the re-design reverted to the older system of a separate gearbox. The electrics (as was universal for larger British motorcycles of the period) consisted of two independent systems, the very reliable and self-contained Lucas magneto, with a dynamo generator to charge the battery and provide lights. Carburation was initially a single Amal remote float Type 6. Later Amal TT and then 376 Monoblock carbs were used.

The A7 was launched with a rigid frame and telescopic front forks. One useful feature was a hinged rear mudguard that lifted up to allow the rear wheel to be removed more easily.[6]

Plunger rear suspension was offered as an option to the rigid frame from 1949.[7] Concerned about the high wear rate of the plunger suspension that lead to poor handling a swinging arm frame was introduced in 1954[6] and the rigid and plunger frames discontinued.[7]

All models are swinging arm frame unless otherwise indicated.

The A7 was launched in 1947 with a rigid frame and the "long stroke" engine with iron barrels and cylinder head. Plunger suspension was offered as an alternative from 1949. The engine was changed to the shorter stroke A10 based design in 1951. The rigid frame was discontinued in 1953 and the plunger in 1954. From 1954 the swinging arm frame was produced, and the name "Flash" given to the model in the US market.[9] An alternator was offer as an alternative to the dynamo from 1961.[7] Production ceased in 1962 when the unit construction A50 was introduced.

In response to competition from the Triumph Tiger 100BSA launched the A7SS Star Twin. The new model had increased compression ratio. It had the later A10 based engine and the latest design of cylinder head with austenitic steel inlet and exhaust valves.[5] The inlet manifold was separate from the cylinder head[8] so twin carburettors could optionally be fitted. The uprated engine was fitted to a plunger frame and finished extra chrome. The model was produced with an option of rigid or plunger frames. In 1953 a new alloy head was fitted together with an Amal Monoblock carburettor. The model was discontinued in 1954 in favour of the "Shooting Star" model.

The Shooting Star was introduced in 1954 with a new swinging arm frame. The engine had a hotter cam,[9] and compression was upgraded from 6.6:1 to 7:1. Power was up to 30 bhp (22 kW) at 5800 rpm, with a top speed of just under 90 mph (140 km/h).[2] The earlier models had a dark green frame and a separate carburetor manifold fitted to the alloy cylinder head. By the end of production in 1962 the BSA Shooting Star was the culmination of the development of the BSA A7, with a black frame with light green tank, mudguards and side panels, it had an alloy cylinder head, a duplex cradle frame with swinging arm rear suspension, full-width cast iron hubs and 8-inch drum brake at the front with a 7-inch at the rear.

In 1952 three BSA A7s were entered for the Maudes Trophy and the International Six Days Trial, achieving 4,500 miles (7,200 km) without problems and confirming the reliability of the design. All three bikes were randomly selected from the production line, picked up Gold medals and earned BSA the Team award as well as the Trophy. The three bikes were ridden by Brian Martin, Fred Rist and Norman Vanhouse. From Birmingham the team rode to Vienna then on through Germany, Denmark, Sweden and Norway before returning safely and with a clean sheet to Birmingham.[5][10]

Also in 1952 American BSA dealer Hap Alzina prepared a BSA Star Twin for an attempt on the American Class C speed record for standard catalogue motorcycles. The rules prevented major modification but Alzina was allowed to use 80 octane fuel, which together with a compression ratio of 8 to 1 enabled rider Gene Thiessen to achieve a two way record speed of 123.69 mph (199.06 km/h).[5]

In 1954 Bobby Hill won the Daytona 200 riding a rigid framed Shooting Star. (The rigid frame version was a special order from the factory). The race had one straight asphalt and the other on the beach during the 1950s. Of the 107 starters only 44 finished. Shooting Stars finished 1st, 2nd, 4th and 5th. A BSA Gold Star finished in 3rd.[9]

In 1960 the Akashi-based Kawasaki Aircraft Company acquired an interest in the Meguro motorcycle company, which had obtained a license to produce a copy of the 500 cc BSA A7. Meguro had been Japan's largest motorcycle manufacturer but in the late 1950s its models had become less competitive and it was short of money. Kawasaki's investment enabled Meguro to launch its A7 copy as the Meguro K.[11][12]

In 1963 Meguro was taken over one hundred percent by the new Kawasaki Motorcycle Corporation, which maintained the licensing agreement with BSA and continued to build the K model, but due to lubrication problems Kawasaki made engine modifications and the Kawasaki K2 entered production in 1965 with improved crankshaft bearings and a larger oil pump. Since the introduction of the K2, the Meguro K model has tended to become known retrospectively as the K1.[13]

In 1965 the K2 was enlarged to 624 cc to become the Meguro X-650 prototype, which was displayed at the 1965 Tokyo Motor Show. The X-650 then became in turn the prototype for the Kawasaki W1.[14] For the new Kawasaki big bike, the traditional look of Meguro motorcycles was replaced with a sleeker fuel tank, sportier mudguards (fenders) and other details intended to appeal to export markets, especially North America.[15][16]