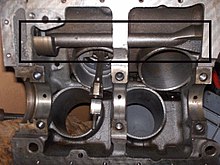 Balance shafts are used in piston engines to reduce vibration by cancelling out unbalanced dynamic forces. The balance shafts have eccentric weights and rotate in opposite direction to each other, which generates a net vertical force.

The balance shaft was invented and patented by British engineer Frederick W. Lanchester in 1904. It is most commonly used in inline-four and V6 engines used in automobiles and motorcycles. 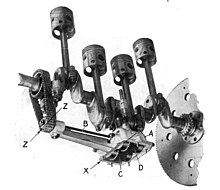 The balance shafts do not reduce the vibrations experienced by the crankshaft. [2]

Numerous motorcycle engines— particularly straight-twin engines— have employed balance shaft systems, for example the Yamaha TRX850 and Yamaha TDM850 engines have a 270° crankshaft with a balance shaft. An alternative approach, as used by the BMW GS parallel-twin, is to use a 'dummy' connecting rod which moves a hinged counterweight. 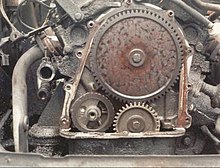 Valve timing gears on a Ford Taunus V4 engine. The balance shaft runs off the small gear on the left (the large gear is for the camshaft, causing it to rotate at half the speed of the crankshaft).

Balance shafts are often used in inline-four engines, to reduce the second-order vibration (a vertical force oscillating at twice the engine RPM) that is inherent in the design of a typical inline-four engine. This vibration is generated because the movement of the connecting rods in an even-firing inline-four engine is not symmetrical throughout the crankshaft rotation; thus during a given period of crankshaft rotation, the descending and ascending pistons are not always completely opposed in their acceleration, giving rise to a net vertical force twice in each revolution (which increases quadratically with RPM).[3]

The Lanchester design of balance shaft systems was refined with the Mitsubishi Astron 80, an inline-four car engine introduced in 1975. This engine was the first to locate one balance shaft higher than the other, to counteract the second order rolling couple (i.e. about the crankshaft axis) due to the torque exerted by the inertia caused by increases and decreases in engine speed.[4][5]

Balance shaft are also used in Straight-five engines such as GM Vortec 3700.

In a straight-six engine and flat-six engine, the rocking forces are naturally balanced out, therefore balance shafts are not required.