The Cadillac Allanté is a two-door, two-seater luxury roadster produced by Cadillac from 1987 until 1993. It used a Cadillac chassis and running gear with a body built in Italy by coachbuilder Pininfarina. It was expensive to produce with the complete bodies flown to Detroit for final assembly. Over 21,000 were built during its seven-year production run. 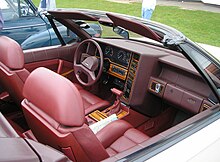 The name Allanté was selected by General Motors from a list of 1,700 computer generated selections.[1] Originally designed to compete with the Mercedes-Benz SL and Jaguar XJS, the Allanté originally featured a slightly modified variant of the 4.1 L V8 used across Cadillac's model line. This was expanded to 4.5 L in 1989, and upgraded to the 4.6 L L37 Northstar in its final year, 1993.

The Allanté incorporated an international production arrangement that was similar to the early 1950s Nash-Healey two-seat sports car. The Allanté bodies were designed and manufactured in Italy by Pininfarina[2] and were shipped 4,600 mi (7,403 km) to the U.S. final assembly with domestically manufactured chassis and engine.[2] Specially equipped Boeing 747s departed from Turin International Airport with 56 bodies at a time,[2] arriving at Detroit's Coleman A. Young International Airport about 3 miles northeast of Cadillac's new Hamtramck Assembly plant, known as the "Allanté Air Bridge".[3][4] The expensive shipping process stemmed from GM's recent closing of Fisher Body Plant #18, which had supplied Cadillac bodies since 1921. It was not the first time that Cadillac utilized Pininfarina, having farmed out body production for the 1959 Eldorado Brougham and design and coachworks for several one-offs, customs, and concept cars.

All Allanté models featured a fully electronic instrument and control panel, which was angled towards the driver, and featured no knobs or manual controls. General Motors (GM) also implemented electronic controls in its mid-to-late 1980s vehicles such as the Buick Reatta, Buick Riviera, and Oldsmobile Toronado Trofeo, although these vehicles included a touchscreen control panel called the Graphic Control Center (GCC), which the Allanté did not feature.

The front-wheel drive Allanté roadster featured a transverse multi-port fuel injected variant of GM's aluminum 4.1 L (250 cu in) HT-Cadillac 4100 V8, along with roller valve lifters, high-flow cylinder heads, and a tuned intake manifold. Suspension was independent strut front and rear, with Bosch ABS III four-wheel disc brakes. A removable aluminum hardtop, Delco-GM/Bose Symphony Sound System (a $905 option on other Cadillacs), the industry's first power retractable AM/FM/Cellular Telephone antenna, and a complex lamp-out module that substituted an adjacent lamp for a burned-out bulb in the exterior lighting system until the dead one could be replaced were all standard. The only option was a cellular telephone, installed in a lockable center console. The base price came in at $54,700.

For 1988, the Allanté featured revised front seat headrests, and a power decklid pulldown as standard equipment. Analog instruments, in place of the standard digital dash cluster, were also now available as a no-charge option. The base price was raised to $56,533, with the cellular telephone still being the only extra-cost option. 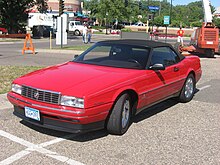 In 1989, the base price rose to $57,183. Allanté's engine, the new 273ci (4.5L) V8, produced 200 hp (149 kW; 203 PS), and with 270 lb⋅ft (366 N⋅m) of torque. Unlocking the trunk also unlocked the side doors – similar to Mercedes-Benz and BMW. As a theft-deterrent, Allanté added GM's Pass Key (Personal Automotive Security System), utilizing a resistor pellet within the ignition key that has the ability to render the fuel system and starter inoperative if an incorrect ignition key is used. Allanté also received a new speed-sensitive damper system called Speed Dependent Damping Control, or SD²C. This system firmed up the suspension at 25 mph (40 km/h) and again at 60 mph (97 km/h). The firmest setting was also used when starting from a standstill until 5 mph (8.0 km/h). Another change was a variable-assist steering system.

In 1990, Cadillac offered a lower-priced ($53,050) companion model with a cloth convertible roof and without the removable aluminum hardtop, and a model including the hardtop at $58,638. By midyear, prices were dropped to $57,813 for the hardtop/convertible and $51,500 for the convertible, which included a $650 Gas Guzzler Tax along with $550 destination charge. The fully integrated cellular telephone, which was equipped from the factory on just 36 cars this year, was available for an additional $1,195. Allanté's bumper-to-bumper new car warranty, seven years and 100,000 mi (160,000 km), was three years longer than other Cadillacs, and an additional 50,000 mi (80,000 km) of coverage. Allanté owners also received a special toll-free number to call for service or concerns. Headlamp washers and dual 10-way Recaro seating remained standard. A driver's side airbag was added to the leather-wrapped steering wheel, eliminating the telescoping steering wheel — which retained its tilt feature. The analog instrument cluster – introduced the previous year – was standard on the convertible (available at no extra cost on the hardtop/convertible), with a total of 358 cars equipped with the analog cluster.

The power mirror control moved from the right of the steering column on the instrument panel to a new location on the upper end of the driver's door armrest, while the power seat switches (previously mounted on the face of the seat base) were relocated to the lower side trim of the seat base facing the door panels. The 3-channel garage door opener base mounted on the header panel above the windshield was eliminated when a new sun visor design was introduced this year. Traction control was added – the first front-wheel drive automobile with a V8 to be equipped as such. The system was designed to cut fuel to up to four cylinders to reduce power and optimize traction.

The electronically controlled shock absorbers were retuned to remain in "soft" mode for up to 40 mph (64 km/h). Previously, they entered "normal" mode after just 25 mph (40 km/h). A revised audio system allowed a CD player to be added as standard equipment, along with the cassette player. Of the 2,523 built for 1990, only five were exported – four to Canada and one to Germany. Allanté was available in eight colors this year, the most popular was Euro Red, found on 1,012 cars, while the least chosen was Gray Metallic, with only 28 made. Interior color choices (and production figures) were Charcoal Gray (1,343), Natural Beige (767), and Maroon (413).

In 1991, Cadillac added a power-latching mechanism for the convertible top, and the digital instrument cluster, featured in all but 275 Allanté models this year, was repriced (it was now a $495 option for the convertible model). Prices began at $57,260, although a midyear price-drop brought the Allanté convertible down to $55,900, and the hardtop/convertible down to $61,450 (from $62,810). Allanté had 16.3 cubic feet of storage (when utilizing the pass-through compartment into the cabin area). Of the 1,928 models produced for 1991, only seven were manufactured for export – five to Canada, one to Italy, and another to Puerto Rico. Canadian models offered a kilometer-based instrument cluster, daytime running lamps, and an engine block heater as standard equipment, while the Italian model featured a list of European-mandated modifications, including breakaway side mirrors, specific European headlamps and turn signals, a front tow hook, rear fog lamps, deletion of the deck-lid mounted center brake light, a wet-arm windshield washer system, coolers for the power steering and automatic transmission fluids, and a revised steering column to compensate for the removal of the driver's airbag.

The Allanté for 1992 was priced at $58,470 for the convertible, and $64,090 for the hardtop/convertible. Both prices included the mandated gas guzzler tax, which was now at $1,300. As it had been the custom for a few years now, price drops were announced midyear, $57,170 for the convertible, and $62,790 with the removable hardtop. The optional digital cluster was priced at $495 (available at no charge on the removable hardtop model), however, only 187 cars were equipped with the standard analog cluster this year. Also available on the convertible at extra-cost, a pearl white paint group (option YL3) priced at $700 (found on 443 models for 1992). This was the last year of the multi-adjustable Recaro seating design, as 1993 would go into production with less expensive Lear-designed eight-way dual power seats. Of the 1,698 produced this year, only four of them were specifically built for export – all of them to Canada. As with the previous year, the most popular exterior, found on 549 models, was 47U – Euro Red, while only 15 were made in 49U – Light Blue Metallic. Three shades of leather were available for the interior, the colors and production totals are: Charcoal (859), Natural Beige (652), Maroon (187), (50) Polo Green, and one Pearl Flax, (O4U).

Introduced in early 1992 for the 1993 model year, Allanté was scaled down to just one model this year, the soft-top convertible priced at $59,975 (not including a mandatory $1,700 gas guzzler tax for vehicles sold in the United States). The removable 60.5 lb (27.4 kg). aluminum hardtop was now a separate option, as well as the $495 LCD digital instrument cluster in place of the standard analog instruments. A $700 pearlcoat paint option (in Flax or Canyon Yellow, with Hawaiian Orchid added midyear) was available. Also optional were chrome squeeze-cast aluminum wheels. For its final model year, Allanté received the 4.6 L (280.7 cu in) Northstar DOHC V8 engine. It was rated at 295 hp (220 kW) at 5600 rpm. Torque output was 290 ft⋅lb (393 N⋅m) at 4400 rpm. A new unequal-length control arm rear suspension, shared with the Seville and Eldorado, was also introduced that year. Also new for the small Cadillacs was Road Sensing Suspension, an active damper management system, and revised disc brakes. The 1993 model used GM's Delco "Premium Symphony Sound System". Other changes for the Allanté included a revised variable-assist power steering rack, deeper front spoiler, and single-piece side windows, which did away with the stationary forward vent window. Production for 1993 was the highest. Of the 4,670 Allantés manufactured for the 1993 model year, 115 were for export – France (1), Austria (2), Belgium (5), Germany (5), Switzerland (6), Japan (11), and Canada (85).[citation needed]

The 1993 Allanté was also chosen as the 1992 pace car for the 76th Indy 500 Indianapolis 500, the pace car was driven by Bobby Unser. There were three modified 1993 Allanté Pace Cars that had only seat belts, lighted roll bar, and air intake modified from a stock production Allanté's, those three Allanté Pace cars were provided for the race, as well as just 30 stock 1993 Allanté's used as Festival/Pace Cars and 58 stock 1992 Allanté Festival/Pace cars that were used by drivers and crews at the opening parade and the closing of the race. Al Unser Jr's 1993 Allanté Festival/Pace car was featured at both the 2012, and 2013 Keel's & Wheel's Concours D’Elegance in Seabrook, Texas, Bobby Unser was Grand Marshal in 2012, and Al Unser Jr was Grand Marshal in 2013.[citation needed]

The last Allanté built was flown from Turin, Italy on July 2, 1993, and completed at Detroit-Hamtramck 14 days later. With 21,430 built, assemblies averaged just a little more than 3,000 a year throughout the car's lifetime. Production officially ended on July 16, 1993.[citation needed]