The ELR derived from Cadillac's Converj concept, which debuted at the 2009 North American International Auto Show. Scheduled for production and subsequently canceled during GM's bankruptcy and restructuring, and after a series of on-again, off-again decisions, the ELR was approved for production for MY 2014 with a MSRP at roughly $75,000 — $35,000 higher than the Volt whose basic powertrain it shared.[8]

Styled under the exterior design direction of Tim Kozub,[9] Cadillac presented the production ELR at the 2013 North American International Auto Show[10][11] with retail deliveries beginning in the United States and Canada in December 2013.[12] 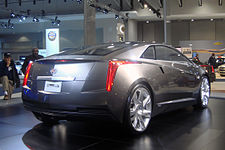 The Cadillac Converj concept viewed from the rear

General Motors debuted the Cadillac Converj concept, the car that would eventually become the 2014 Cadillac ELR, in January 2009, at the North American International Auto Show.[14]

In April 2009, Motor Trend reported that General Motors approved the production version of Cadillac Converj in 2011 as a 2012 model year vehicle.[15] GM refuted the report, saying that the Converj was "a concept vehicle undergoing a review".[16] An August 2009 BusinessWeek report said GM vice-chairman Robert Lutz wanted to see the Converj go into production, possibly as early as 2014,[17] and it was reported that while delivering the keynote speech at the 46th annual Northwood Auto Show Lutz "hinted that an announcement on production for the well-received Cadillac Converj concept car may be forthcoming."[18] At the 2010 North American International Auto Show, Lutz told the Society of Automotive Analysts, "The Cadillac Converj is cleared for production," but that "It won't be next year or the year after that."[19] Despite these statements, in March 2010, Bloomberg BusinessWeek reported that GM decided to end work on the Converj, because the car "couldn't have enough amenities and electric range to be compelling to buyers and produce a profit".[20]

In August 2011, General Motors reversed its decision to cancel the project and announced the Converj concept would go into production as the Cadillac ELR, at a price less than the US$57,400 Tesla Model S, but did not provide details on performance or timing. General Motors said the ELR would be about the same size as the Chevrolet Volt and would be produced in the same facility.[21][22] Within the framework of GM's vehicle electrification strategy,[23] the Cadillac ELR was—after the Chevrolet Volt EREV and Spark EV—the third plug-in electric passenger car sold by General Motors in the U.S. since the EV1 was discontinued. In contrast to pure battery EV proponents like Tesla Motors, GM has initially focused on extended-range EV technology that incorporates internal combustion engines.

U.S. Department of Energy Secretary Steven Chu discusses the features of the 2014 Cadillac ELR exhibited at the 2013 Washington Auto Show.

The ELR incorporates a version of the Voltec[3] propulsion system used in the Chevrolet Volt. The Voltec propulsion system includes a 119–135-kilowatt electric motor, a four-cylinder engine-generator and a 16.5 kWh lithium-ion battery pack. The ELR has an official all-electric range of 37 miles (60 km) and a total range of 340 mi (550 km), as rated by the United States Environmental Protection Agency (EPA).[5] Charging times are 12.5–18 hours using the 120-volt travel charger, and about 5 hours using a 240-volt charging station. Top speed is 106 mph (171 km/h) and accelerates from 0–60 mph in 7.8 seconds in range extended mode.[7] Regenerative braking is controlled by steering wheel-mounted paddles.[26]

For MY 2014, the ELR was available in four exterior colors, radiant silver metallic, black raven, graphite metallic and extra-cost bi-coat crystal red — with a tri-coat white edition of 100 examples marketed through Saks Fifth Avenue — fully optioned with an upgraded 240-volt charging station (including installation) and concierge service.[27] For MY 2016, the ELR was available in radiant silver, stellar black, graphite metallic, crystal white and red passion colors.

Skipping the 2015 model year, for the 2016 model year Cadillac decreased the ELR's MSRP by $10,000 and raised total system horsepower, from its two electric motors and gasoline four-cylinder engine. Horsepower increased from 217 to 233, and peak torque increased from 295 lb-ft to 373 – reducing the zero-to-60 time by 1.5 seconds. The 2016 models featured revised torque-steer-mitigating strut technology with stiffer springs, stiffer control-arm bushings, and the addition of a damper rebound spring.

The engine management software was updated and the regenerative braking system reconfigured. The 2016 ELR delivered an all-electric range of 39 mi (63 km), up from 37 miles (60 km).[28]

The ELR has a traditional shift lever (PRNDL) with a button on the console allowing selection of four driving modes: Tour, Hold, Mountain and Sport:

Tour mode, the default setting, lets the ELR operate in all-electric mode (EV mode) until its battery is fully discharged. This mode provides the maximum powertrain efficiency and a minimum level of vibration.

Hold mode allows the driver to save the energy currently stored in the battery for later use, such as traveling in urban areas.[30]

Mountain mode was designed to provide more available battery power in mountainous environments by increasing minimum battery state of charge (SOC) in the battery. The car uses the gasoline-engine sooner, or runs it longer to build up the battery's state of charge, thus allowing the car to maintain performance on steep and long grades. Range extended versions of the BMW i3 do not have this mode and have struggled in these situations, resulting in a class-action lawsuit.[31]

Sport mode improved throttle response, and improved feedback with more aggressive steering and suspension settings.[30] For 2016, the ELR could combine power from both the engine and electric motor when in Sport mode.

The EPA's 2014 edition of the "Light-Duty Automotive Technology, Carbon Dioxide Emissions, and Fuel Economy Trends" report calculated utility factors for plug-in hybrids to estimate the percentage of miles that would be driven using electricity by the average driver, in electric only or blended modes. The ELR scored a utility factor of 65%, compared with 83% for the BMW i3 REx, 66% for the Chevrolet Volt, 45% for the Ford Energi models, and 29% for the Toyota Prius PHV.[32] Real world driving statistics (collected automatically by OnStar[33] and shared by ELR owners on the Volt Stats website) showed a fleet total of 98.46 MPG (141.87 MPG median) as of August 2016.[34] 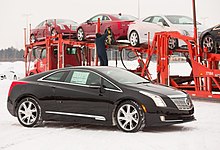 Shipping to dealers of the 2014 Cadillac ELR began in late December 2013.

In October 2012, General Motors announced that the ELR would be assembled at the Detroit-Hamtramck Assembly Plant, alongside the Chevrolet Volt, Opel Ampera, and Holden Volt. The addition of the ELR to the plant represented an additional US$35 million investment, bringing the total product investment at the plant to US$561 million since December 2009.

General Motors began assembly of pre-production vehicles to be used for testing in late May 2013. Production of vehicles destined for retail customers began in December 2013.[35][36] Shipping to dealerships from the Detroit-Hamtramck Assembly began on December 20, 2013[37] and, while retail deliveries were scheduled to begin in January 2014, the first 10 units were delivered early in December 2013—six in the U.S.[12] and four in Canada.[38]

Cadillac announced that it will launch a new plug-in hybrid version of its new CT6 sedan in late 2016.[13]

In 2012, Green Car Journal selected the ELR as one of the five finalists in the Green Car Vision Awards.[46]

In 2013, the ELR was awarded "Best Production Vehicle" in the Eyes on Design Awards.[47]

In 2014, the ELR won the "Green Car Technology Award" for its Regen on Demand system, which allows the driver "to use paddle shifters on the steering wheel to temporarily regenerate energy and store it…in the battery pack for later use."[48] The second generation Chevrolet Volt adopted a refined version of this system in the 2016 model year.[49]

The updated 2016 ELR earned the "Vincentric Best Value in America" award for the lowest maintenance and repair costs in the "Luxury Electric/Plug-In Hybrid" class.[50]

Cadillac launched the ELR marketing campaign with a 60-second television commercial. Called Poolside and featuring actor Neal McDonough, the commercial prominently aired during broadcast of the 2014 Winter Olympics opening ceremony as well as before and during the 86th Academy Awards (Oscars) in March 2014.[51]

The commercial opens with its protagonist, an American businessman portrayed by McDonough, casually dressed and standing by the outdoor swimming pool of his contemporary, upscale home, asking "why do we work so hard?" He walks through his home, interacting with his family, changing into business attire, ultimately standing by and unplugging his ELR – while extolling the American Dream, the Wright Brothers, NASA's moon mission, Bill Gates and American work ethic and short annual leave – compared to other countries, unnamed. He finally asserts from the driver's seat of his ELR that the house and car are the benefit of only taking two weeks off in August, finally asking rhetorically, n'est-ce pas? — and winking to the camera.[52] GM targeted an audience earning $200,000 per year.[52]

In 2014, USAToday said the ad "may be the best TV ad – not just car ad – of the year."[53] Ad Age, describing the ad as contentious and controversial, reported that "fans on the political right see Poolside as an unapologetic ode to American values. Critics on the political left see it as Ugly American chest thumping at its worst. During a time when Americans are working harder and longer for less money, others question the spot's perceived workaholic message."[54] Ford subsequently parodied Poolside with a commercial for the Ford C-Max hybrid, featuring a spokesperson for a group that promotes urban farming, praising "hard work not for material gain, but in the name of progress," also ending with a rhetorical n’est-ce pas?[55]