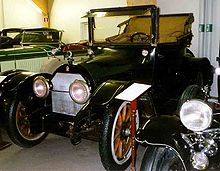 The Cadillac Type 53 was the first car to use the same control layout as modern automobiles- with the gear lever and hand brake in the middle of the front two seats, a key started ignition, and three pedals for the clutch, brake and throttle in the modern order. This Cadillac was driven by a 77 horsepower V8 engine. The Type 53 remained in production for one year only, in 1916. When this car debuted in 1916 it succeeded the Cadillac Type 51. The following year the Cadillac Type 55 replaced the Type 53. It was built at the Cass Street and Amsterdam Avenue factory in Detroit, with the body provided by a number of coachbuilders, including Fleetwood Metal Body in Fleetwood, Pennsylvania.

Although this car did not gain great popularity, it created the modern layout of an automobile that is still used today. This layout became popular with the Austin 7, which copied the control layout from the Cadillac Type 53.[1]