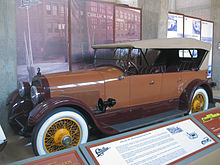 The Cadillac Type V-63 is a large luxury automobile that was introduced in September 1923 by Cadillac as a 1924 model, replacing the previous Type 61. It used the GM C platform and was replaced by the Cadillac Series 355.

The V-63 used an improved version of the L-head V8 engine that made Cadillac famous. The main innovation was a cross-plane crankshaft which improved balance and smoothness. This design required complex mathematical analysis, and was simultaneously patented by Peerless. Both companies agreed to share the innovation, which has now become common. Another innovation in the V-63 was front-wheel brakes.

A line of "Custom" bodies was added for 1925, but the vehicle was otherwise largely unchanged. The line was refreshed for 1926 as the . It was built at the Cass Street and Amsterdam Avenue factory in Detroit, with the body provided by a number of coachbuilders, including Fleetwood Metal Body in Fleetwood, Pennsylvania.