For the municipality, see Chiemsee (municipality). For the bishopric, see Bishopric of Chiemsee.

Location of Chiemsee in South Germany

Chiemsee (German pronunciation: [ˈkiːmzeː]) is a freshwater lake in Bavaria,[2] Germany, near Rosenheim. It is often called "the Bavarian Sea". The rivers Tiroler Achen and Prien flow into the lake from the south, and the river Alz flows out towards the north. The Alz flows into the Inn which then merges with the Danube. The Chiemsee is divided into the bigger, north section, in the northeast, called Weitsee, and the Inselsee, in the southwest.

The Chiemgau, the region surrounding the Chiemsee, is a famous recreation area. 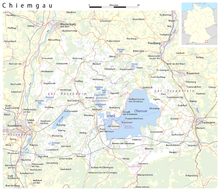 High resolution map of the lake within its surrounding region, Chiemgau

The Chiemsee was formed, like many other pre-alpine lakes, at the end of the last ice age about 10,000 years ago from a hollow carved out by a glacier (a Zungenbecken). Originally the lake covered an area of almost 240 km2 (93 sq mi), which is about three times its present area. Within 10,000 years its area had shrunk to around 80 km2 (31 sq mi). Before 1904 the water level was lowered by about a metre. As a result, large areas of dry land were reclaimed.

There are three main islands on the lake: Herreninsel ("gentlemen's island"), the largest, with an area of 238 hectares (590 acres); Frauenchiemsee, 15.5 ha (38 acres), also called Fraueninsel ("ladies' island"); and uninhabited Krautinsel ("cabbage island"),[2] 3.5 ha (8.6 acres), called this name because in the Middle Ages it was cultivated with cabbages and other vegetables.[3]

The smallest island in the lake is the Schalch 66 m (217 ft) west of Frauenchiemsee, which is of square outline, with a side length of only 4.7 m (15 ft) or an area of 22 m2 (240 sq ft). This tiny island had probably been created artificially to mark a shallow spot for sailboats. There is a willow on the island, originally planted in 1935, and replaced by a young tree in the 2000s.[citation needed]