Compact car is a vehicle size class — predominantly used in North America — that sits between subcompact cars and mid-size cars. The present-day definition is equivalent to the European C-segment or the British term "small family car". However, prior to the downsizing of the United States car industry in the 1970s and 1980s, larger vehicles with wheelbases up to 110 in (2.79 m) were considered "compact cars" in the United States.

The beginnings of U.S. production of compact cars were the late 1940s prototypes of economy cars, including the Chevrolet Cadet and the Ford Vedette.[3](p214) Neither car reached production in the U.S., however the Vedette was produced by Ford SAF in France.[3](p214)

The first U.S produced compact car was the 1950 Nash Rambler. It was built on a 100-inch (2,540 mm) wheelbase, which was nonetheless still a large car by contemporary European standards.[3](p214) The term "compact" was coined by a Nash executive as a euphemism for small cars with a wheelbase of 110 inches (2,794 mm) or less.[4][5] It established a new market segment and the U.S. automobile industry soon adopted the "compact" term.[6][7]

Between 1958 and 1960, the major U.S. car manufacturers made a push towards compact cars, resulting in the introduction of the Studebaker Lark, Chevrolet Corvair, Ford Falcon, and Plymouth Valiant.[13] These models also gave rise to compact vans built on the compact car platforms, such as the Studebaker Zip Van,[14][15] Chevrolet Covair Greenbrier, Ford Econoline and Dodge A100. 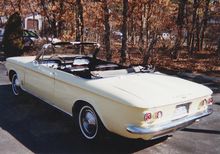 During the 1960s, compacts were the smallest class of North American cars, but they had evolved into only slightly smaller versions of the 6-cylinder or V8-powered six-passenger sedan. They were much larger than compacts by European manufacturers,[16] which were typically five-passenger 4-cylinder engine cars. Nevertheless, advertising and road tests for the Ford Maverick and the Rambler American made comparisons with the popular Volkswagen Beetle.[17][18][19][20]

Compact cars were also the basis for a new small car segment that became known as the pony car, named after the Ford Mustang, which was built on the Falcon chassis. At that time, there was a distinct difference in size between compact and full-size models, and early definitions of vehicle size class was based on wheelbase, with models under 111 inches as compact, 111 to 118 inches intermediate and over 118 inches as full size,[citation needed] at least until EPA classes based on interior volume of the passenger and cargo compartments were introduced in the later 1970s.

In 1973, the Energy Crisis started, which made small fuel efficient cars more desirable, and the North American driver began exchanging their large cars for the smaller, imported compacts that cost less to fill up and were inexpensive to maintain.

In the 1985 model year, compact cars classified by the EPA included Ford's Escort & Tempo, and the Chevrolet Cavalier. For the 2019 model year, the best sellers were the Toyota Corolla and Honda Civic.[22]

One of the first compact cars that met those requirements was the Toyota Publica with an air cooled two cylinder opposed engine, the Datsun 110 series, and the Mitsubishi 500. The Publica and the Mitsubishi 500 were essentially "kei cars" with engines larger than regulations permitted at the time, while the Datsun was an all-new vehicle. These vehicles were followed by the Hino Contessa in 1961, the Isuzu Bellett, Daihatsu Compagno and Mazda Familia in 1963, the Mitsubishi Colt in 1965, and the Nissan Sunny, Subaru 1000, and Toyota Corolla in 1966. Honda introduced their first four-door sedan in 1969, called the Honda 1300. In North America, these cars were classified as subcompact cars.

By 1970, Nissan released their first front-wheel-drive car that was originally developed by Prince Motor Company which had merged with Nissan in 1966. This was introduced in 1970 as the Nissan Cherry. In 1972, the Honda Civic appeared with the CVCC engine that was able to meet California emission standards without the use of a Catalytic converter.