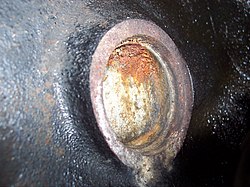 A core plug that has corroded from improper engine coolant maintenance, causing it to leak

Sand cores are used to form the internal cavities when the engine block or cylinder head(s) is cast. These cavities are usually the coolant passages. Holes are designed into the casting to support internal sand forms, and to facilitate the removal of the sand after the casting has cooled. These holes have no purpose after the sand has been removed, therefore a core plug is a cap at the end of these passages, to prevent water or coolant leaking from the engine.[1]

Core plugs are usually thin metal cups press fitted into the casting holes, but may be made of rubber or other materials. In some high-performance engines the core plugs are large diameter cast metal threaded pipe plugs.[2]

Core plugs can often be a source of leaks due to corrosion caused by cooling system water.[3] Although modern antifreeze chemicals do not evaporate and may be considered "permanent", anti-corrosion additives gradually deplete and must be replenished.

The slang term "freeze plug" is derived from the many years ago in situations where the water in an engine block could freeze (due to plain water being used in winter rather than anti-freeze coolant). The expansion of the water as it froze would cause the core plug to pop out of the engine, leading to the term "freeze plug".[4]