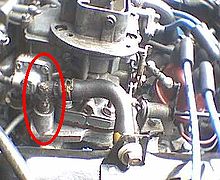 In an internal combustion engine, a crankcase ventilation system removes unwanted gases from the crankcase. The system usually consists of a tube, a one-way valve and a vacuum source (such as the intake manifold).

The unwanted gases, called "blow-by", are gases from the combustion chamber which have leaked and pass through the piston rings. Early engines released these gases to the atmosphere simply by them leaking through the crankcase seals. The first specific crankcase ventilation system was the road draft tube, which used a partial vacuum to draw the gases through a tube and release them to the atmosphere. Positive crankcase ventilation (PCV) systems— first used in the 1960s and present on most modern engines— send the crankcase gases back to the combustion chamber, in order to reduce air pollution.

Two-stroke engines with a crankcase compression design do not need a crankcase ventilation system, because normal operation of the engine involves sending the crankcase gases to the combustion chamber.

Blow-by, as it is often called, is the result of combustion material from the combustion chamber "blowing" past the piston rings and into the crankcase. These blow-by gases, if not ventilated, inevitably condense and combine with the oil vapor present in the crankcase, forming sludge or causing the oil to become diluted with unburnt fuel. Excessive crankcase pressure can furthermore lead to engine oil leaks past the crankshaft seals and other engine seals and gaskets. Therefore, it becomes imperative that a crankcase ventilation system be used.

Until the early 20th century, blow-by gases escaped from the crankcase by leaking through seals and gaskets. It was considered normal for oil to leak from an engine and drip onto the ground, as this had also been the case for steam engines in the decades before. Gaskets and shaft seals were intended to limit the leakage of oil, but they were usually not expected to entirely prevent it. The blow-by gases would diffuse through the oil and then leak through the seals and gaskets into the atmosphere, causing air pollution and odours.

The first refinement in crankcase ventilation was the road draft tube. This is a pipe running from the crankcase (or the valve cover on an overhead valve engine) down to an downwards-facing open end located in the vehicle's slipstream. When the vehicle is moving, airflow across the open end of the tube creates suction (a "draft") that pulls gases out of the crankcase. To prevent a vacuum being created, the blow-by gases are replaced by fresh air using a device called a breather.[1] The breather is often located in the oil cap. As per the earlier engines, the road draft tube system also created pollution and objectionable odors.[1] The draft tube could become clogged with snow or ice, in which case crankcase pressure would build and cause oil leaks and gasket failure.[2]

On slow-moving delivery vehicles and boats, there was often no suitable air slipstream for the road draft tube. In these situations, the engines used positive pressure at the breather tube to push blow-by gases from the crankcase. Therefore the breather air intake was often located in the airflow behind the engine's cooling fan.[1] The crankcase gases exited to the atmosphere via a draft tube.

Although the modern purpose of a positive crankcase ventilation (PCV) system is to reduce air pollution, the original purpose was to allow an engine to operate underwater without the water leaking in. The first PCV systems were built during World War II, to allow tank engines to operate during deep fording operations, where the normal draft tube ventilator would have allowed water to enter the crankcase and destroy the engine.[3]

In the early 1950s, Professor Arie Jan Haagen-Smit established that pollution from automobile engines was a major cause of the smog crisis being experienced in Los Angeles, California.[4] The California Motor Vehicle Pollution Control Board (a precursor to the California Air Resources Board) was established in 1960 and began researching how to prevent blow-by gases from being released directly into the atmosphere.[5] The PCV system was designed to re-circulate the gases into the air intake so that they could be combined with the fresh air/fuel and more completely combusted. In 1961, California regulations required that all new cars be sold with a PCV system, therefore representing the first implementation of vehicle emissions control device.[6]

By 1964, most new cars sold in the U.S. were so equipped by voluntary industry action so as not to have to make multiple state-specific versions of vehicles. PCV quickly became standard equipment on all vehicles worldwide because of its benefits not only in emissions reduction but also in engine internal cleanliness and oil lifespan.[1][7]

In 1967, several years after its introduction into production, the PCV system became the subject of a U.S. federal grand jury investigation, when it was alleged by some industry critics that the Automobile Manufacturers Association (AMA) was conspiring to keep several such smog reduction devices on the shelf to delay additional smog control. After eighteen months of investigation, the grand jury returned a "no-bill" decision, clearing the AMA, but resulting in a consent decree that all U.S. automobile companies agreed not to work jointly on smog control activities for a period of ten years.[8]

In the decades since, legislation and regulation of vehicular emissions has tightened substantially. Most of today's petrol engines continue to use PCV systems.

In order for the PCV system to sweep fumes out of the crankcase, the crankcase must have a source of fresh air. The source of this fresh air is the "crankcase breather", which is usually ducted from the engine's intake manifold. The breather is usually provided with baffles and filters to prevent oil mist and vapour from fouling the air filter. 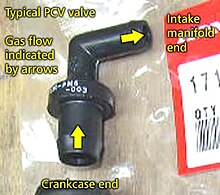 Intake manifold vacuum is applied to the crankcase via the PCV valve. The airflow through the crankcase and engine interior sweeps away combustion byproduct gases. This mixture of air and crankcase gases then exits, often via another simple baffle, screen, or mesh to exclude oil droplets, through the PCV valve and into the intake manifold. On some PCV systems, this oil baffling takes place in a discrete replaceable part called the 'oil separator'. Aftermarket products sold to add an external oil baffling system to vehicles, which were not originally installed with them, are commonly known as "oil catch tanks".

Carbon build-up in the intake manifold may occur when blow-by gases are allowed to permanently contaminate the intake air because of a failing PCV system[9].

Two-stroke engines which use crankcase compression do not require a crankcase ventilation system, since all of the gases within the crankcase are then fed into the combustion chamber.

Many small four-stroke engines such as lawn mower engines and electricity generators simply use a draft tube connected to the intake system. The draft tube routes all blow-by gases back into the intake mixture and is usually located between the air filter and carburetor.

Dry sump engines in some drag racing cars use scavenging pumps to extract oil and gases from the crankcase.[11] A separator removes the oil, then the gases are fed into the exhaust system via a venturi tube.[citation needed]. This system maintains a small amount of vacuum in the crankcase and minimises the amount of oil in the engine that could potentially spill onto the racetrack.[12]