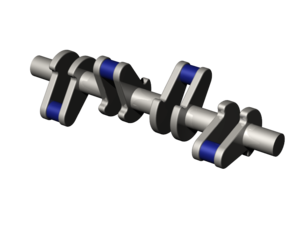 The most common configuration is for a crankpin to serve one cylinder. However, many V engines have each crankpin shared by each pair of cylinders.

The bearing which allows the crankpin to rotate around its shaft is called the "rod bearing".[4] In automotive engines, the most common type of rod bearing is the plain bearing, however bushings or roller bearings are also used in some engines.

In a single-cylinder engine, straight engine or flat engine, each crankpin normally serves just one cylinder. This results for a relatively simple design which is the cheapest to produce. Some V-twin engines use a single cylinder per crankpin.

Most V engines have each pair of cylinders sharing a crankpin. This usually requires an offset between the cylinders in each bank, resulting in a simple connecting rod design. If a cylinder offset is not used, then the connecting rods must be articulated or forked at the big end. Forked connecting rods are mainly used in V-twin motorcycle engines, but in the past were found on a number of automobile and aero engines, such as the Rolls-Royce Merlin aero engine of the WWII era. Articulated connecting rods consist of a "master" rod attached to the crank pin, with a "slave" rod connected to the big end of master rod. This design was used in older or exotic V engines.

Radial engines use a more complicated version of articulated connecting rods, where a single "master" connecting rod attached to the single crankpin (one for each row in multi-row designs), and smaller bearings for each of the corresponding cylinders machined into the big end of the master rod.